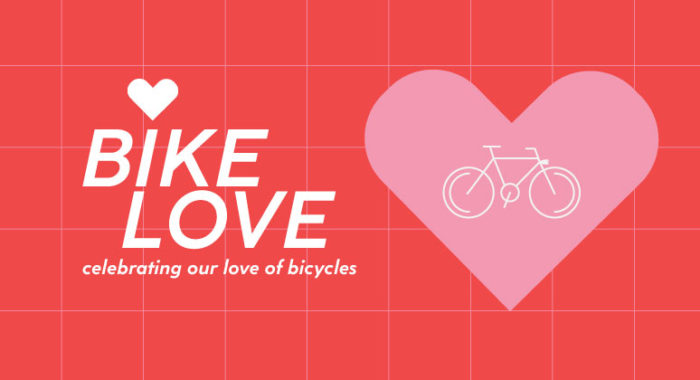 Spring is here(ish). How do we know? Maybe you’re swapping tires on your bike from winter to summer. Maybe you’re pulling out the Spring Bike. Maybe you’re taking a road bike off a trainer. Maybe you’re inspecting the damage from the road salt and pathway grit on your orange chain. Whatever you’re doing, it involves a bike (or bikes) you love.

This February we put a pause on Bike Love month, due to the occupation downtown. With the indescribable suffering for those living downtown that left  racialized communities shaken, further diminishing their sense of safety and security.

Now the trucks are gone, Wellington street remains closed to motor vehicles. After the occupation, this gives us the opportunity to stop and think about how vehicles were weaponized to make our streets inhospitable, and how we can build a city that focuses on moving people, rather than moving objects.

We were still thinking about this on a very warm and spring-like March afternoon when we learned someone was killed by the driver of a snow plow  while riding her bicycle. Once again, our whole community was shaken, angered, saddened by the loss of yet another person who simply had chosen to ride her bike.

Bike Love is meant to celebrate any and all stories about riding bikes. The joy that comes with pedalling, the feeling of wind rushing by, the smiles from other people on bikes, the people who stop their rides to point out birds, to grab an ice cream, those who pedal hard up the hills of Gatineau Park, people who hop on their trusty steed in a blizzard to get to work;,  parents carrying their kids to school, people loading up on groceries, or carrying their christmas tree home by bike. For fun, for utility, and every combination of both – the love of bicycles can create a sense of community in what can sometimes seem to be a chaotic and unfeeling world.

The last two months have reminded many of the importance of streets designed for people to move quietly, and safely. The simple bicycle seems even more important these days, after seeing the streets filled with trucks and the ever increasing damage to the environment, the bicycle remains the key to a future Ottawa- one with less motor vehicles, less pollution, less noise, and more joy. So we’re having a re-do on Bike Love month. We all need some more love, and what better way to bring in Spring than by showing our Bike Love?

Thanks Brigitte for your story, and here’s to all the goofy-grinned people on bikes, whatever you’re riding!

This may come as a surprise to some of you who have been following my work, but I am not in point of fact an avid cyclist.

I don’t like lycra. I’ve never used the special clicky shoes that attach to the pedals and I don’t even own a helmet.

But I do love biking. And here lies a problem.

We live in a culture that does not adequately glorify the regular-person-on-a-bike kind of cycling. Which is only one short step away from saying society should glorify me but fear not, I will not take that step. But I do want us to make a lot more space for people who bike the way I do.

I couldn’t tell you the difference between a bracket and a crankset. But I do rather enjoy the flowery basket I recently affixed to my handlebars all by myself. It’s not straight but that’s OK. Neither am I.

I do love being on my bike, going from my home in Westboro to the other side of the river and the Museum of History, crossing back into Ontario on the Alexandra Bridge and back home along the Ottawa River.

That typically takes me about two hours because I bike like a grandpa, with a goofy grin on my face and happiness in my heart.

I love being on my bike because I don’t have to be on my bike if I don’t feel like it. That makes it easier, no doubt.

I have worked from home for decades, and I love not having to commute. In many ways I’ve been training all my life for this pandemic lifestyle. When I do have to go places downtown, it’s either by bike when the weather is nice enough or take transit otherwise. (I did the same during the two and a half years I lived in suburban Nepean, just off Bruce Pit; this isn’t just a Westboro affectation.)

On Twitter I follow a few members of the Powerful Bike Lobby and I see their #VikingBiking selfies with their frosted eyelashes and whatnot and part of me kind of wants to be like them, but it’s not the biggest part of me to be perfectly honest about it.

I run, I skate, I do all kinds of stuff in the cold. Biking? Not yet. Maybe never. Because I like my biking easy and goofy-grin inducing.

I ride a “comfort” bike with cushy springs and wide tires. One that didn’t cost me the skin of my eyeballs either. It’s just an ordinary bike for an ordinary cyclist who enjoys nothing more than a gentle ride on segregated paths in nature and stop every now and then to take pictures, grin like a goof, and breathe very deeply.

I want to normalize that kind of biking because there are many people out there who might switch to that mode of transportation more often if they weren’t made to feel deficient somehow for not having a robust enough opinion on gear shifters.

Normalize riding like a grandpa, free the cushioned tushy, embrace the fair-weather cyclist, make the slow and the goofy feel safe on beautiful segregated paths. This will create more demand for more bike infrastructure and eventually more cyclists… of all stripes.

Here’s to my comfortable, happy ride.