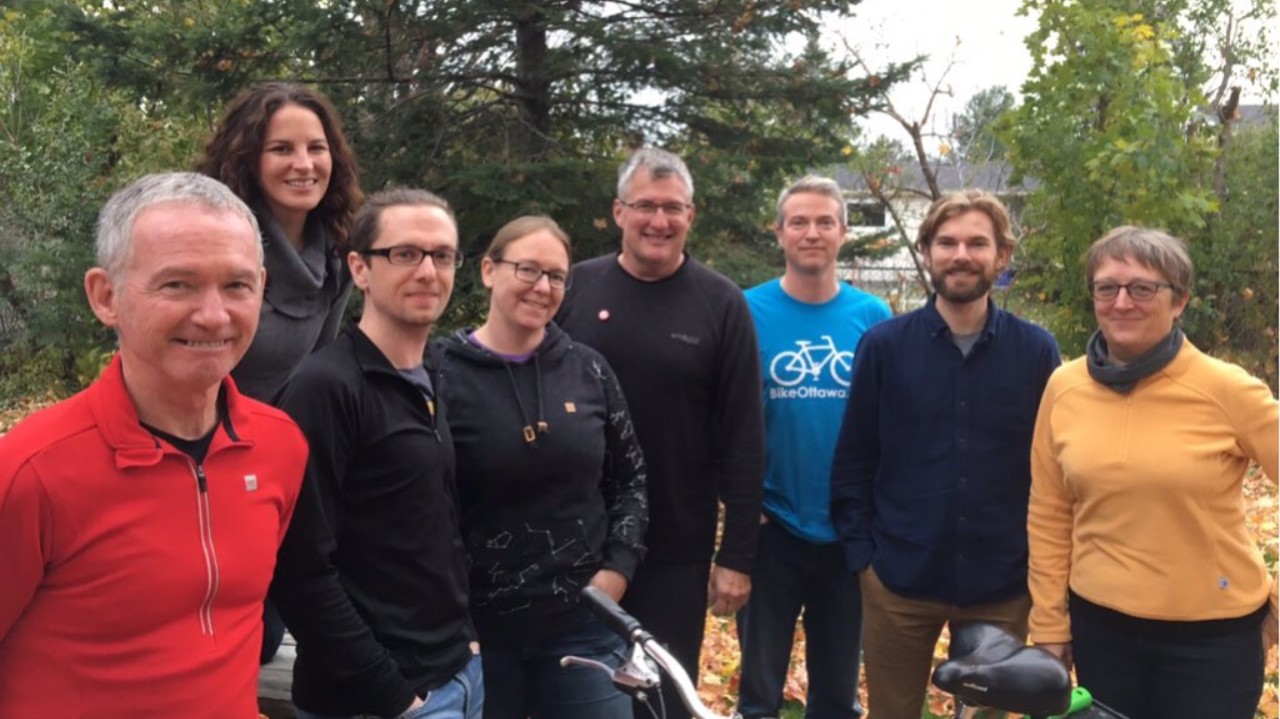 I’m committed to making Ottawa a great city for for cycling.

I joined the board in 2015. As a board member, I’ve enjoyed playing a communications role and contributing to our advocacy efforts, including through the development of our organization’s policies. I’ve enjoy meeting with other community members, political leaders at the federal, provincial, and municipal levels, as well as with NCC and City of Ottawa staff to discuss how Ottawa can be a sustainable and vibrant city. I started Bike Ottawa’s Data Group, which hold exciting possibilities for will helping us build a strong evidence-based case for cycling infrastructure. We have mapped all of Ottawa and created our Level of Cycling Stress maps.

I ride for fun and for transportation. It’s very important to me that people of all ages and abilities should have the option to ride a bike, in every part of the city. That means building convenient, connected infrastructure that anyone would feel comfortable using, as well as broad public and political support to adequately fund our cycling plan.

I’ve made most trips by bike and on foot in the decade I’ve lived in Ottawa, gradually shifting from being a fair-weather recreational rider to a year-round utility cyclist. I’m an amateur urbanist, and when travelling, I like to explore new cities by transit or rental bike, with special attention to cycling infrastructure.

Since joining the Board in January 2018, I have represented Bike Ottawa at the Ontario Bike Summit and at the National Bike Summit, connecting with bike advocates and policy makers from across the country. Outside the board, I am involved with producing the Bike Ottawa Annual Report and with the Data Group. I also try to make to as many outreach events as I can, for the chance to tell people about the work Bike Ottawa is doing, and to hear new perspectives on how we can improve cycling in Ottawa.

I am semi-retired and active in the community. In addition to volunteering for Bike Ottawa as a member of the Advocacy Working Group, I’m a longtime volunteer for Habitat for Humanity of Greater Ottawa.

My relevant qualifications for this position include a Bachelor of Commerce degree, a Master of Business Administration degree, and successful careers in payroll/HR professional services (with Comcheq and Ceridian) and accounting/management consulting (with Deloitte).

Common denominators of my work experience include management of financial processes, financial controls, business development, teamwork, and communication. I will bring these skills to duties of the Treasurer in support of Bike Ottawa’s mission.

I’ve been riding my bike everywhere for well over a decade now, and found out early on that being a cyclist naturally inclined me to being a noisy cyclist. Starting with my blog, The Incidental Cyclist, I started writing and commenting about cycling issues, which eventually led me to a weekly column on transportation in the Ottawa Metro and a few appearances on radio (local and national), and in the Citizen, Metro and Ottawa Magazine (some of that because of last year’s “chalk ghost bike” battle at Bank and Riverside). Lately I’ve been advocating for improvements to cycling and pedestrian links in and around Heron Gate and South Bank Street along with the Healthy Transportation Coalition. I’ve had previous board experience as a member of the Ottawa StoryTellers Board of Directors: I’ve been a member of Bike Ottawa for two years and I feel like serving on the board is a way for me to contribute more to the organization, and to cycling in Ottawa in general.

As a retired foreign service officer, I have experienced cycling culture and infrastructure in many countries. When back in Ottawa, I have been involved in cycling issues with the City and NCC for over 40 years, led a group of over 500 cyclists to advocate for enhanced cycling security in and around Global Affairs Canada and have been a member of Bike Ottawa’s Advocacy Working Group for the last three years, including meeting with councillors and cyclists on infrastructure issues in the east end of the city. I hope to use this experience to advance the development of cycling in the National Capital Region – to make it not only safer for cyclists, but to stress its environmental, climate change, health and welfare benefits. There are many challenges facing us, which I hope to address by conducting outreach with other board members, promoting driver awareness and supporting cyclist training and driver awareness.

Why I ran for a board position? I can think of platitudes like wanting to make a difference, hoping to help improve cycling infrastructure so more people start cycling. A friend of mine who is a very nervous cyclist has come to ottbikesocial a couple of times.

Now she bikes with me to the NAC and home at night. She has come to realize she gets home faster (than bussing) after the shows. If I can help people like her get on her bike more often, that would be good.

After a long period of only biking intermittently, I came back to biking about 5 years ago, and it has been a joy, particularly when I can ride with my two sons on my cargo bike. Since then I’ve realized that one best things we can do for our cities is get more people using bicycles. We know that cycling improves the quality of life for everyone: less cars, less pollution, less congestion, and more happy people.

Fortunately we live in a city where we have a spine of routes available through the parkway system that the National Capital Commission maintains, and a growing number of urban cycling facillities. But none of this happens without strong, effective advocacy for 8-80 cycling infrastructure.

I will continue to advocate for a cycling network in Ottawa that emphasizes safety and connectivity, and work to build relationships with activists in the city who are working to make our streets more safe, and more liveable through better walking and better transit options.

I live in Centretown and work as a graphic designer and marketing coordinator at an architecture firm in Westboro. I have used cycling as my primary method of transportation for ten years in Ottawa and Toronto (and have been an all-season cyclist for five years).

I am a published author of short fiction and a performer with the improv group Crush. I blog and tweet about cycling issues (@jordobicycles) and was happy to be part of the campaign to bring safe cycling to Holland Avenue.

Over twelve years ago, I got back on a bike as an adult, not realizing it would captivate me so much. I simply needed a faster, cheaper way to get around. I have found that often for life in the city the bike is the easiest and fastest way to get around. It is also incredibly fun.

As the years have gone by, biking for commuting and pleasure has been something I wish more people would enjoy. But I have also grown to learn this only happens when there are good and safe networks of biking routes.

I became a parent and continued to ride my bike for commuting, but now, with a copilot. He and I have biked thousands of kilometers around the city – daycare runs, swimming lessons, park outings, museums, and general adventuring. We are lucky to be able to connect to many of Ottawa’s safest biking routes, but I know many are not as fortunate. I see the gaps in city routes, and the streets that are not friendly for biking.

I know the importance of having routes for people to enjoy, be it because they replace a few car trips with a bike trip, or decided to replace a whole car with a bike, but to make this happen for more people we need to be supporting the development of safe and complete street designs.

My wish is for other people to experience this too, and this is why I have become more involved in small acts of advocacy, such as Red Cup Bike Lanes, and chalk drawings as small reminders to every street user that we all deserve safe routes.

I will keep working to advocate for safe complete streets because I feel strongly that everyone deserves to move around the city comfortably and safely, no matter what mode of movement they are using.