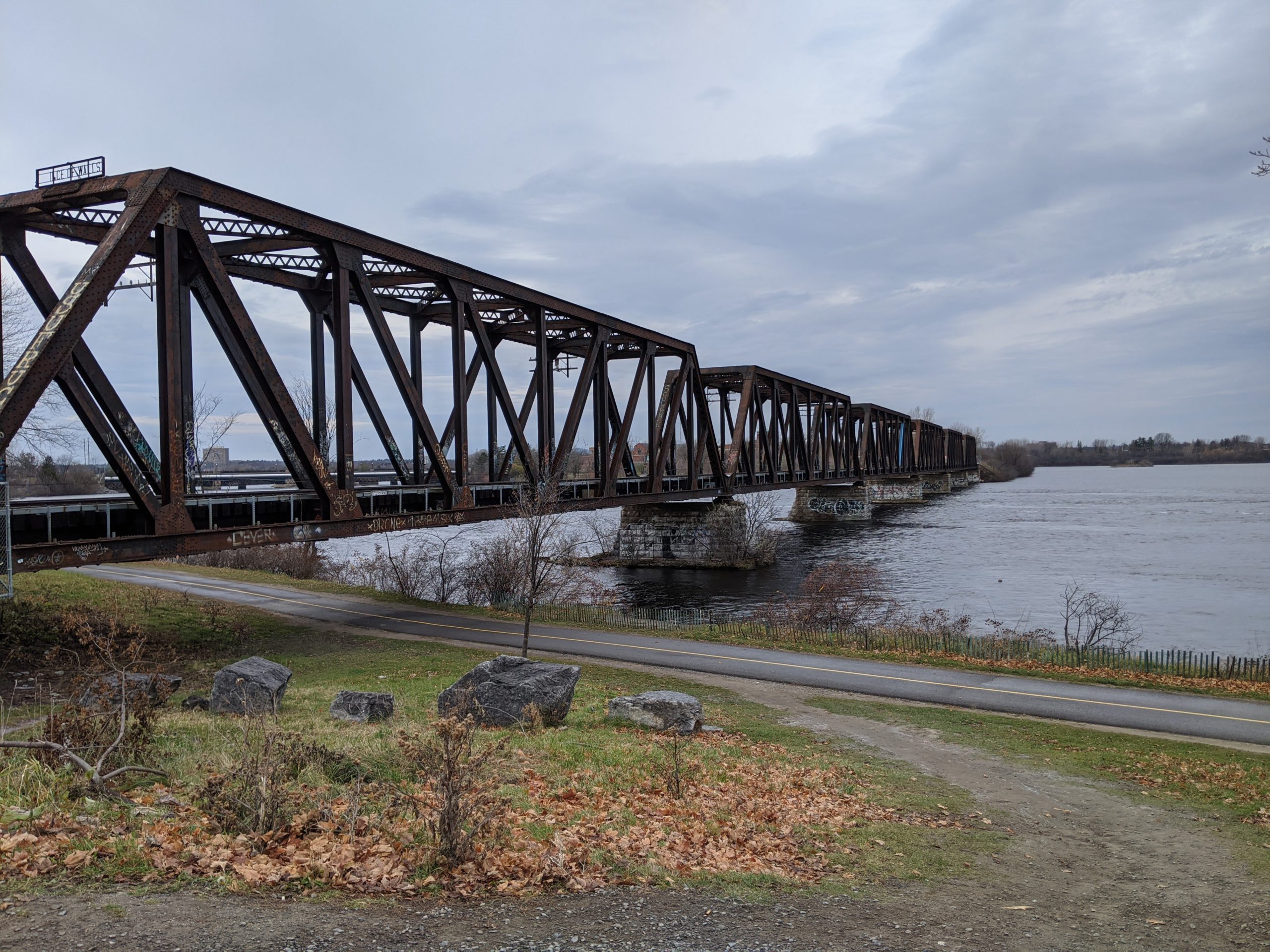 On July 26th the federal government announced its commitment to fund the transformation of the Chief William Commanda Bridge to provide a new link between Gatineau and Ottawa for active transportation.

In March 2021 Bike Ottawa submitted detailed comments (see below) about the bridge* supporting the re-opening of this connection for active transportation, while stressing the importance of ensuring this becomes an all season connection. While the announcement made this past week is welcome, unless the plans include a proper bridge redesign it will not accommodate all season use, and therefore remain a recreational connection only.

We are left with some questions about the intent of the future use of the bridge because the National Capital Commission’s “Capital Pathway Strategic Plan 2020” includes the CWC bridge as a “cleared pathway”, extending the Trillium pathway all the way to Alexandre-Taché. It is unclear to us how the connection would be made on the north side of the bridge, or how this plays into the design of the bridge for winter maintenance.

Recently the Federal Government announced it would be creating Canada’s first ever federal strategy and fund dedicated to active transportation trails and pathways. The news release states: “Investing in pathways and trails for cycling, walking, hybrid e-bikes and scooters, and wheelchairs gives everyone the opportunity to get out, get active, and access public transportation.”

The language here around riding bikes on trails and pathways suggests recreational riding. In the first community meeting in Spring of 2021 Bike Ottawa, and several other community groups, stressed the need to focus on building bike infrastructure in cities and towns in order to shift the modal share and make choosing to ride a bike the easy and safe choice for everyday use. We’ll continue to send this message and the important role replacing car trips with bike trips can have on the environment and our overall health.

It will be great to have a new connection across the Ottawa river, but if we’re gearing up to make a true modal shift with an emphasis on active transportation we need to create infrastructure for all season use.


*Note our letter was submitted before the bridge was re-named, and as such the letter refers to it at the Prince of Wales Bridge.

Read our comments about the Chief William Commanda Bridge below:

Bike Ottawa congratulates the City of Ottawa in getting this MUP project (P1-S2 in the 2013 edition of the Ottawa Cycling Plan) back ‘on the rails’–pun intended. We write in response to the on-line public engagement that you have initiated.

This new active transportation link between Ottawa and Gatineau has so much potential for both commuting and recreation that we feel Alternative 2 does not go far enough. Particularly since we do not foresee any rail activity on the bridge for many years to come, the so-called interim condition could last for a long time.

In planning a new MUP, it is critical to address deficiencies seen with the neighbouring pathways. Users are already well aware of them. Cyclists and pedestrians, with differing needs (e.g. speed of travel), are already crowded on the NCC’s river-edge MUPs and the Trillium Pathway. Conflicts occur under today’s condition of three-metre-wide paved surfaces, but at least there is generous extra space to the sides in most places to enable moving off the path to stop or to pass. Alternative 2 (deck within the trusses only) can supply no more than five metres of width, with a hard limit on both sides. Moreover, Alternative 2 has the limitation of not being able to simultaneously support snow sports and snow-free commuter cycling in the winter. We want to encourage additional active transportation options, and not turn people off!

Therefore, Bike Ottawa proposes a hybrid of Alternative 3 to satisfy the differing user demands in all seasons. We propose to separate the various modes that will be using the bridge, both in mild conditions and in the winter. This would be achieved by providing decking within the trusses as per Alternative A plus cantilevered decking on the east side of the bridge structure. This scheme is pictured in the following figure.

As noted in the figure, the main bridge portion would support three-season cycling with a lane width in each direction of about two metres, plus an offset of 0.5 metres from vertical obstructions. This will enable side-by-side riding in each direction and overtaking of a slower rider without crossing the centre line.

In winter, the main bridge surface could be left snow covered and groomed for both style of cross-country skiing, mirroring what the SJAM Winter Trail currently maintains. Since it is physically separated, the cantilevered deck would be plowed of snow to support those users needing a cleared surface. (Alternatives to salting would have to be used to treat ice on the travel surface.) With their reduced volumes at this time of year, cyclists and pedestrians could share this space.

Two physically distinct surfaces would be maintained along the segment on Lemieux Island, where there is extra space available for potential further separation. It may be possible to leave the rails uncovered and build an ultimate design there right away.

We would like to provide the following additional recommendations to maximize safety, efficiency and comfort for anyone cycling on the new MUP and the existing pathways that connect with it.

1. Choose a railing system to maximize the clear width

2. Ideally, the railing system will avoid exposed vertical support members that could snag a typical bicycle handlebar end. (As per the previous figure, we propose a horizontal guide rail that fills the height range of 800 to 1200 mm above the travel surface.)

3. Midway along each of the two structures (i.e. north and south of Lemieux Island), provide an observation station consisting of a platform that extends outward to widen the deck by several metres. Such stations would afford lookout points for ‘sightseers’ to view down (and perhaps up) the river, as well as functioning as a rest stop. People could stop at such locations without impeding flow on the main thoroughfares. Seating might be offered.

4. The project web page states that both of Alternatives 2 and 3 include modifications to the rail bed on Lemieux Island, but it is unclear what this means. Whatever is done on the island, the MUP could be widened beyond the dimensions that will exist on the bridge structures. This could be achieved by either splitting the route with asphalt pavement on either side of the rails or by continuation of the wood decks but with perhaps a more generous width on the east (summer pedestrian) side.

5. Access from the new path segment on Lemieux Island to the rest of the island should be created and designed to prevent interactions with dogs in the dog park there. The idea will be to permit a convenient loop route that uses both the MUP and Onigam Street.

6. A new transition path should be built between the MUP at the south end of the bridge and the Ottawa River Pathway (ORP), to the west of the bridge. It is shown in accompanying figures. The purpose is to improve the connection between the north-south paths and those users originating from and destined to the west–a natural desire line for all modes and not just cyclists. This eliminates the need for cyclists to make a sharp turn at the terminus of the Trillium Pathway. That segment of Trillium should remain to serve the ORP to the east.

7. Lighting of the MUP is more critical on the island than on the bridge, due to added personal security concerns posed by the vegetation along the rail line.

8. Extending a snow-cleared link from the Ottawa side of the bridge to Bayview LRT Station in concert with the Bike Ottawa proposal should be considered. It would greatly facilitate four-season commuting.

Some of the foregoing recommendations are presented pictorially in the following figures.

In summary, please consider seriously these proposals for attracting more people to travel by human power between Ottawa, Lemieux Island, and Gatineau. The cantilevered deck has the added advantage of maintaining at least something for the public to use, if and when construction to restore rail traffic proceeds in the future. We look forward to receiving progress updates on this fast-tracked project, and will be pleased to discuss the foregoing if you wish.