As a suburban cyclist living in Kanata I spend a lot of time commuting by bike because of the long distances. As such I try to take the most direct route to save time, and this route for me is the Hazeldean, Robertson, Baseline Corridor. I have used this route to go to Carleton University and now I plan to bike to my new job in Merivale when the pandemic is over.

This route takes me down Hazeldean, to Robertson and then along Baseline. The ride along Hazeldean is the only feasible route for people on bikes that do not want to add lots of extra travel time to their trip. But, I feel unsafe and scared while biking, and I would really like the city to add a separated protected bike lane on this major through road.

I know other people would like this too because I see lots of people on bikes, even some children and seniors, biking on the sidewalk beside me on the road. This even happens in places where there is a painted bike lane. It is not safe and that’s why people do not use it. The demand is there but the infrastructure is not.

These are major roads that many people use, and I would like the opportunity to feel safe while using it too. I know many others would enjoy the streetscape a lot more if there was more space between them and the motor vehicles, and bike lanes would provide this space. These are also arterial roads, going through communities and many more people would use this convenient connector street to get to stores if it had separated bike lanes because of the increased safety.

I ride a bike and use public transit instead of driving because I think planning a city that prioritizes personal vehicle use is inefficient. Road infrastructure costs the public a lot of money, roads make sprawling communities that are hard to access for people who do not drive, traffic causes lots of wasted time, traffic crashes are the most likely cause of death of my age group, pollution from motor vehicles hurts the health of the entire community and burning fossil fuels changes the world’s climate, which makes it harder for future generations to live. Additionally, I am a financially conscious person, so I ride a bike because it is much less expensive than owning, maintaining, and insuring a private car. Many people can afford to travel this way, no matter their story or personal struggle – bicycles are mobility devices for many people.

I began riding a bike about once a month in the warm months, when I started school in 2015, biking from Carleton (using the rack and roll programs). In 2020-2021 I have been biking to school and back about one day a week due to the safety concerns during the pandemic. When I go back to work when the office reopens, I will be biking to and from work every day.

The image below is a broken guard rail that highlights how unsafe this section of road is. A vehicle hit this guard rail and completely mangled it. If anyone was biking, walking or rolling, on or beside the sidewalk on this road at the time of this crash they would be seriously injured or worse. 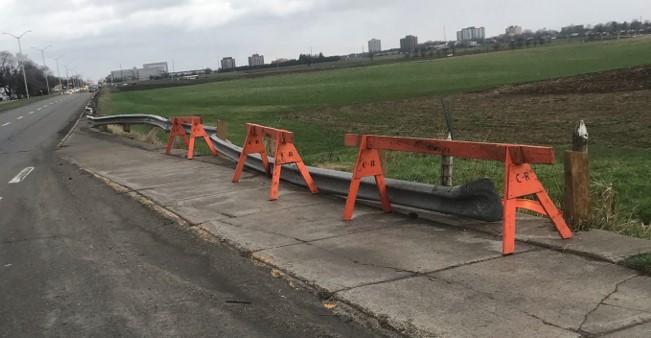 This guardrail is not the only casualty, several people have been injured and killed on this road. I have sent all the pictures in this blog post and an explanation about the need for safety improvements by email to my city councillor on April 22nd, 2021. On June 11th a teenaged boy crossing the road was struck by a driver and seriously injured on Baseline Road. According to reports this was a hit and run. Police are still searching for the driver. I hope this child does not die of their injuries. On March 11th there was a fatal crash between 2 vehicles on baseline. On September 15th, 2020, a man walking was struck by a vehicle on baseline and died (another hit and run). In 2017 two men died when they drove dangerously and flipped their car on Baseline.

This happens too much and future events can be prevented with safer road designs. The city was warned, and crashes will not stop until the road is modified to make it safe. I think these woeful events call for road improvements on Baseline. How many more incidents need to happen before the city to see the issues? I asked about two months ago, what is being done to improve this road for vulnerable road users? I was directed to a general cycling improvement meeting, where they did not address the road. I see no plan to fix the situation. It seems like the city is constantly playing with people’s lives as if they’re just numbers on a page, when each and every person hit by a driver somewhere suffers, or every person forced to ride unsafe spaces suffers from at least the fear of being hit.

I think it is strange that the city is very slow to act on building on safe biking infrastructure but has pledged to go net zero by 2050. Obviously riding a bike is a very easy way to reduce transportation emissions for a very low cost. As per the 2013 Transportation Master Plan (TMP), riding a bike has a very low government and social cost compared to the automobile (Exhibit 2.9 attached).

The City’s Transportation Master Plan (TMP) highlights that people support reducing automobile dependence. In the TMP, the city of Ottawa stated it wanted the bicycling modal share rate in Kanata/Stittville to increase from 1% to 4% by 2030, creating protected bike lanes on the Hazeldean and Baseline would help meet this target. The route I am discussing is supposed to be a spine cycling route. When will the city start planning/building it? 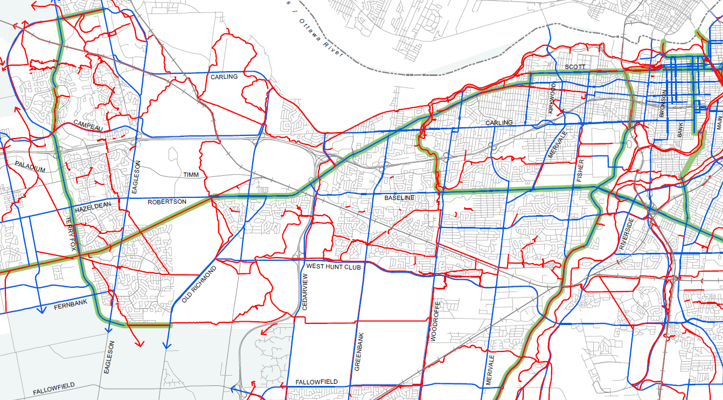