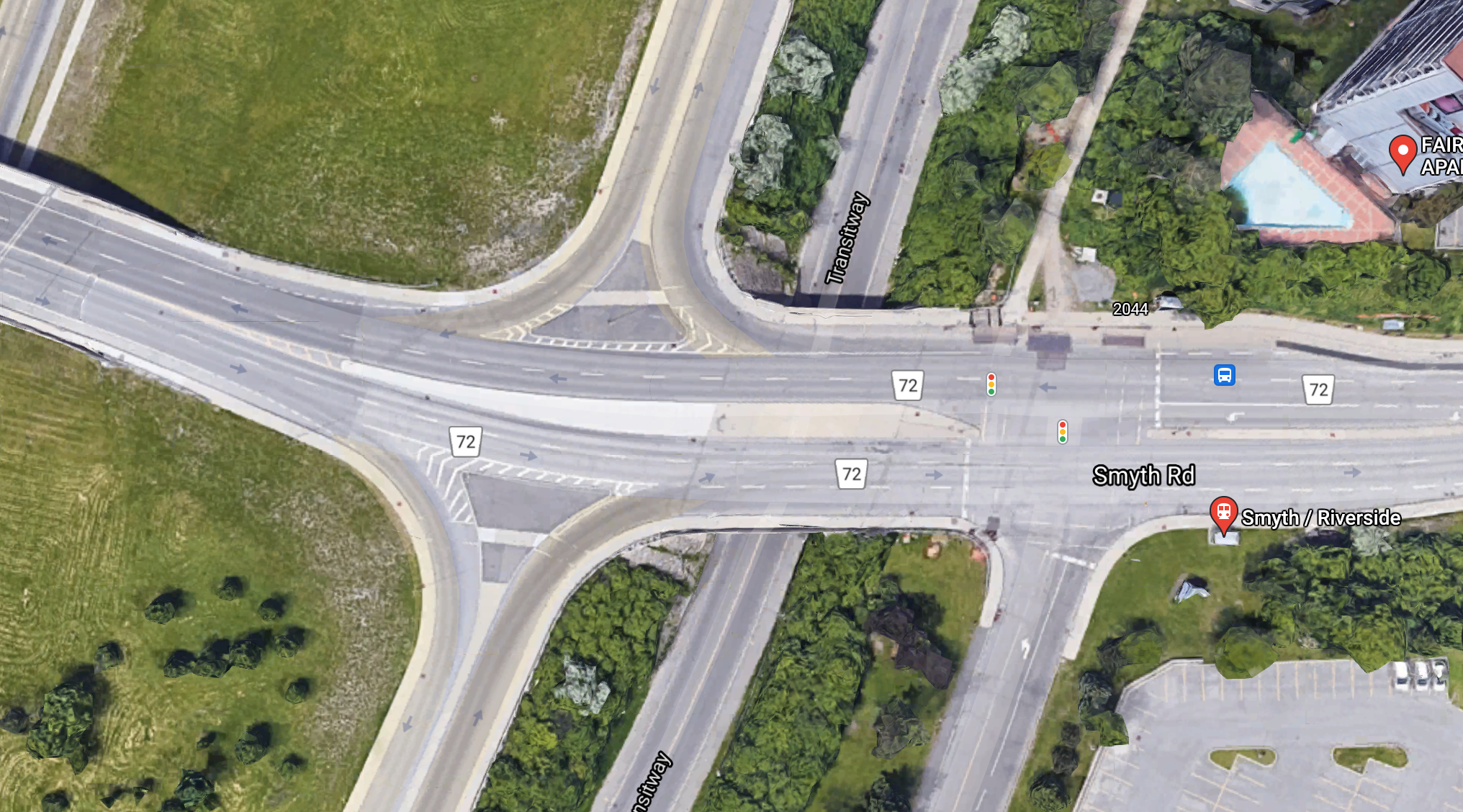 Bike Ottawa has submitted a letter (see below) regarding the proposed changes. We have some concerns, especially with Smyth Road and Riverside Driver intersection, which is a part of the Alta Planning list of high risk intersections. The project plan does not align with the suggestions from Alta Planning for a fully protected intersection here, and it should.

Read on to see what we have suggested the City pay close attention to in order to ensure the area is safe for all ages and abilities to choose to ride a bike on these streets.

(Full letter in text form readable below this image).

While the proposed design changes to Smyth Road at the east end of the McIlraith Bridge are an improvement from existing conditions, the design of Smyth and the Riverside Hospital intersection appears to have been “value engineered” from the fully protected intersection design completed by Alta Planning+Design. We strongly suggest that this design be restored, as the proposed design will still encourage higher speeds as drivers enter or exit the ramps, and does not sufficiently mitigate potential conflicts between people on bikes, pedestrians and drivers.

Bike Ottawa would like to offer the following suggestions for improvements:

1. Bike Ottawa does not support the use of sharrows along Billings and Portage Avenues, or on high-volume arterial roads, as sharrows have been shown to actually decrease safety for people on bikes. Traffic calming and wayfinding signage would be preferable to sharrows for a neighbourhood bikeway. In addition, the concept design from Alta removed the eastbound and westbound auxiliary lanes to provide cycle tracks. We request that the city reinstate cycle tracks in the design, or consider alternative design treatments such as pinned curbs and flex-stakes, between the Riverside ramps and the Riverside Hospital access, in order to eliminate the shared-use lanes in this area.

2. There is no indication in the designs for the Riverside Hospital access that right turn on red will be prohibited. We believe this movement should be prohibited to avoid vehicles blocking the bike box or other conflicts with this facility.

3. The crossing of Alta Vista Dr for east-west cyclists on Billings appears to be potentially challenging, given that this intersection is unsignalized. We understand that a reconstruction is planned for Alta Vista Dr and would hope that options for an improved crossing treatment, such as signals, a refuge island, or a mini-roundabout, are being considered.

4. On Pleasant Park (westbound) at Riverside, it appears that a bike box may be a more appropriate treatment than the sharrows indicated. Some markings across the intersection may be appropriate to direct cyclists to the MUP.

5. There has long been demand from the cycling community for an improved connection from the NCC Rideau River Eastern Pathway to the McIlraith Bridge. We are disappointed that these connections are not included in this project and hope that improvements will be made in the near future.

6. We look forward to seeing the revised designs for Billings Ave at Lynda Lane. The proposed PXO appears to be an awkward crossing for cyclists. In addition, we are concerned that the Lynda Lane Park MUP may be substandard width.

7. The project should include useful and descriptive wayfinding signage for cyclists throughout.

We thank you for your consideration of our concerns and recommendations. Please do not hesitate to contact us for further information. We look forward to riding this new infrastructure once construction is complete.