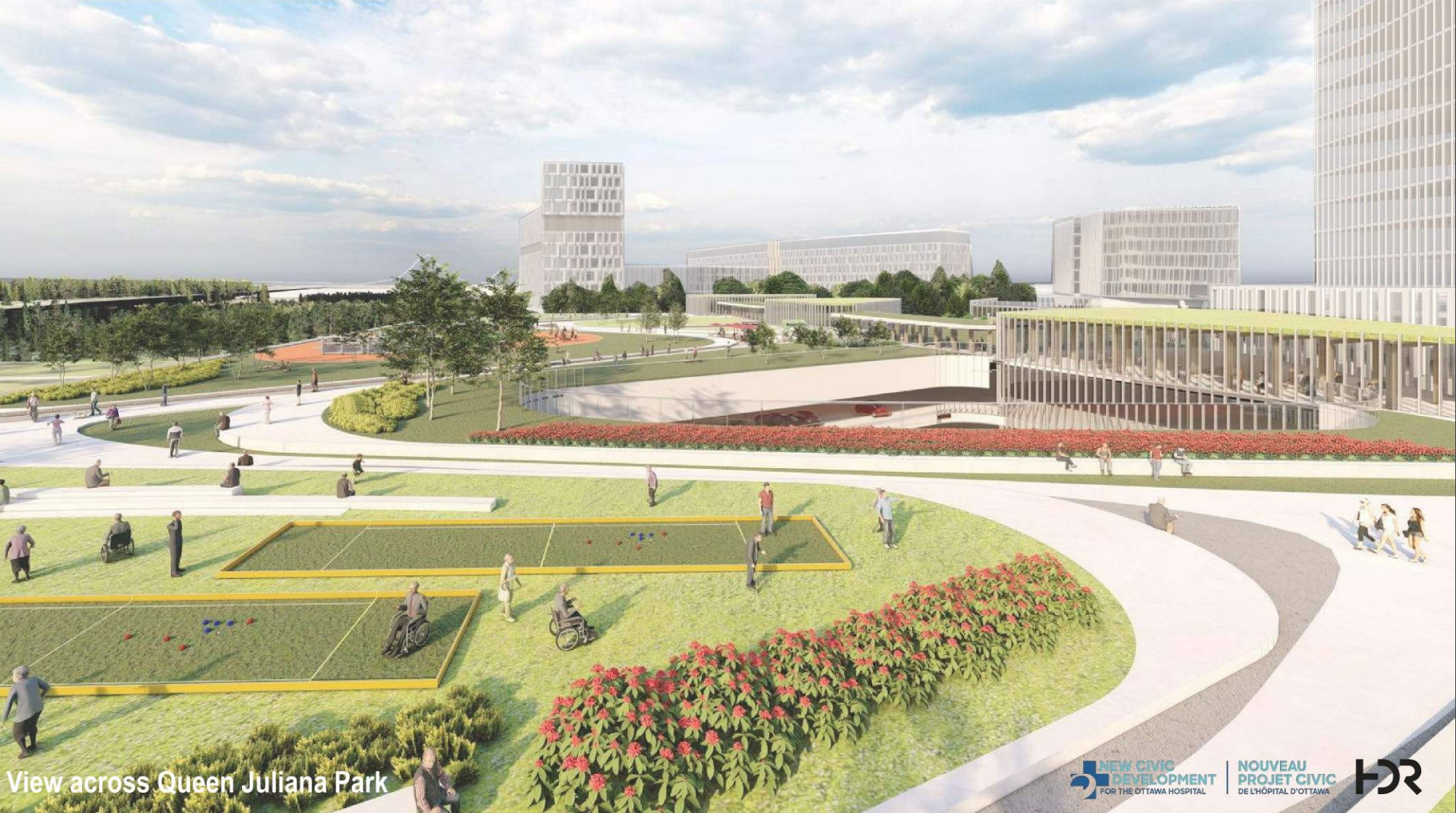 In May, the City of Ottawa released the Transportation Impact Assessment and Mobility Study for the new Civic Campus to be built at the Experimental Farm provides great detail about how hospital staff, patients and visitors will access the hospital and what infrastructure will be needed. Bike Ottawa volunteers have been poring over the study to see what has been proposed for the site, and how it will encourage sustainable transportation to reach the new campus. The plan acknowledges the importance of active transportation, but at every turn private motor vehicles are prioritized, casting doubt on how effective public transit and active transportation will be in bringing people to the campus. In fact, the slide deck presented by the hospital’s consultants does not mince words about the campus being unfriendly to walking and biking.

It’s no surprise, then, to find in the plans the hospital takes over city owned land, and removes an important existing active transportation route. What’s that, you ask? A portion of the existing Trillium multi-use pathway (MUP) from Carling Avenue to Prince of Wales Drive will be removed and “replaced” in order to make space for a parking garage. We’d love to see biking facilities on Preston Street, but not at the expense of a safer, low stress, Trillium MUP. With the removal of the Trillium MUP, people will be given two options. The first option will reroute people along Carling Ave to Preston Street, which is a higher-stress route– running adjacent to a bus route and motorized traffic, and through busy intersections, forcing people to navigate more conflict points, including Carling and Trillium, Carling and Preston, and the entrance to a very large and presumably much busier parking garage. Is this route designed for all ages and abilities to ride their bike?

The second replacement option is the “on-site path” to access Prince of Wales, which diverts people on bikes through a portion of the campus intended for calm pedestrian traffic and invites conflicts. At the very least this should be a segregated facility, but ideally the direct route should be preserved as it acts as more of a “bike highway”. Both replacements result in a poorer user experience.

If we want to become a city of active transportation, we need to add safe choices for routes, not remove them. This means building for the modal split we want going forward. If you want people to ride a bike to the hospital, then give them an abundance of safe route options, rather than making people who walk, roll, or bike “just go around.” Likewise, the main building and entrances are set so far away from the LRT station and the main streets themselves, forcing those who arrive by transit, rolling, walking, and biking, to travel the longest distances.

While we understand not everyone will be able to walk, roll, bike, or take transit to the hospital, many people will be able to make such a choice. But for people to make that choice, we need  safe and convenient infrastructure that makes it easy to access the hospital. At present, the modal share estimates for the 2028 opening and the future growth of the hospital are egregious – just 3% for walking and 2% for biking. Even the 2013 Transportation Master Plan (soon to be replaced with the new Active Transportation Plan) calls for 10% walking and 5% biking modal share goals for 2031. The hospital will be located near well used multi-use pathways and an LRT station. When the City writes that its Official Plan is to have the “majority” of trips be made by sustainable transportation by 2046, why is the plan for the Civic Hospital aiming so incredibly low? Even the plan itself admits it will not be meeting the existing Transportation Master Plan targets because there is so much existing infrastructure devoted to private vehicles. The only thing that appears to meet the modal share targets are trucks.

Part of the blame lies at the feet of the City and parking minimums, and this is where things get tricky. The Hospital plan is designed to meet the outdated parking minimums required by the City of Ottawa, despite the proximity of rapid transit and active transportation links. But the hospital will be built and used after the New Official Plan is passed, and parking minimums near transit stations are to be reduced.

Meanwhile, the new Campus plan has put in 2,500 spaces of parking right across the street from the Carling LRT station. There’s a disconnect here in the planning process, the current guidelines, and upcoming changes in the new Official Plan. Better design is needed and the plans should be held to a higher standard than the previous guidelines currently being used for this site.

We believe that a hospital, of all places, must do better to encourage people to travel by sustainable modes. The new Campus will be served by LRT, bus rapid transit and – as the study itself acknowledges – benefits from strong connectivity to the current active transportation network. We believe the new Campus can and must do better to make sure that its transportation plans better align with the new Official Plan.

Some obvious examples of this prioritization of car travel are as follows:

We also believe the modal share targets are inappropriate. The current modal share targets for 2028 are 3% for walking and 2% for bking. These goals fall significantly short of the modal share goals set out in the City of Ottawa’s Transportation Master Plan (2013), which call for targets of 10% for walking and 5% for biking by 2031 (p. 23). Moreover, the hospital is well-situated, connected to high-use transit lines and existing bike networks; there is no reason why these shares should not be similar to those of other urban areas in Ottawa, whose shares are much higher than the average just stated.

One of the serious flaws of these projections is that they are based on a modal share of 0% for active transportation at the existing Civic Hospital campus (p. 28), which is demonstrably inaccurate: many current employees, for example, bike to work. Another flaw is that estimates are based on the ITE Trip Generation Manual, which, as the plan acknowledges, are vehicle-centric, are based on United States travel patterns, and were completed decades ago (p. 26). While these figures may be “cost effective,” they produce inaccurate results that heavily privilege car travel.

The discussion of Transportation Demand Management (TDM) highlights many potentially helpful means of reducing vehicle reliance and promoting more sustainable modes like active transportation, such as:

Nevertheless, these measures remain speculative. Given the importance of these measures for the new campus’s successful operation, they should be integrated with the main plan and should involve firm commitments.

We are also concerned that the active transportation plan does not fully address the needs of people who are arriving to the campus by bike, or who are biking through the area to destinations beyond the campus:

We thank you in advance for your consideration of our recommendations. Once again, we anticipate sending more detailed recommendations in the coming weeks. In the meantime, we are glad to discuss our feedback and any other issues that may arise at your convenience.