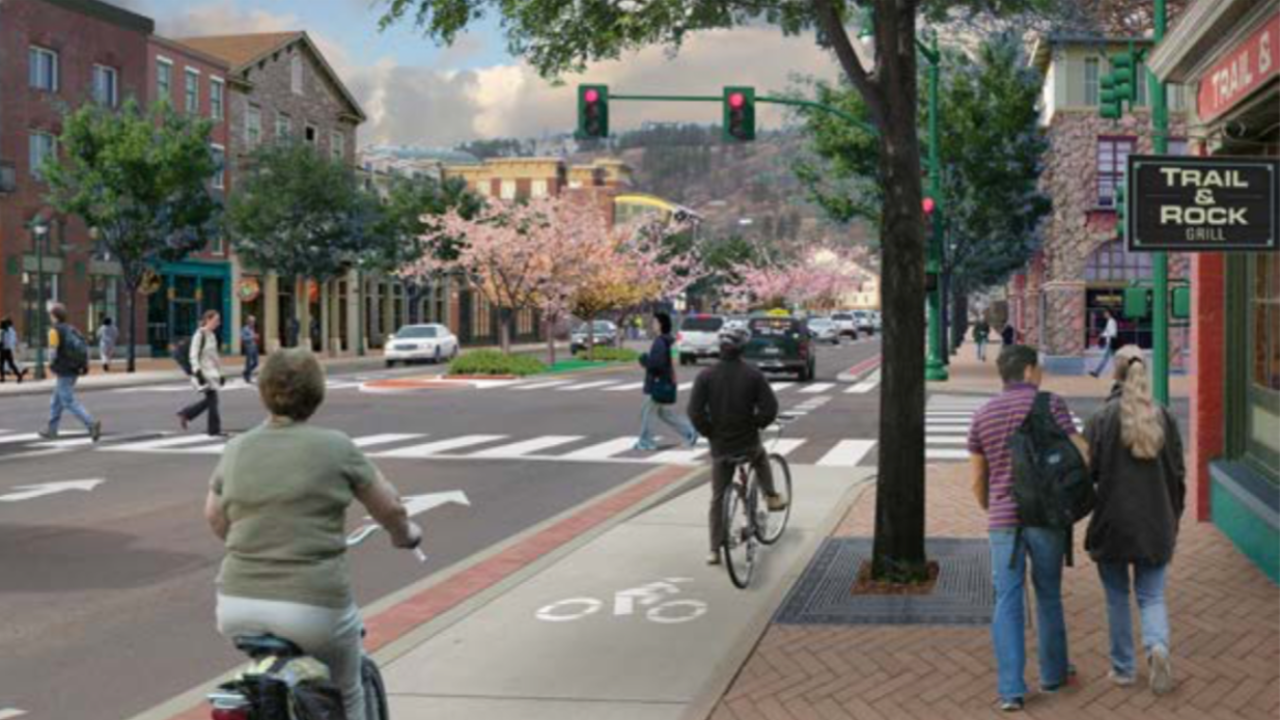 The update to Ottawa’s official plan aims to reduce car dependency and promote active transportation, but increasing residential development at the edge of the city will make those goals more difficult to achieve. On May 12, Bike Ottawa board member Barbara Greenberg presented a delegation to a joint sitting of the Planning Committee and Agricultural and Rural Affairs Committee to oppose expansion of the urban boundary.

Here is the text of the delegation:

Hello. My name is Barbara Greenberg.

I’m a board member from Bike Ottawa and I’m here today to speak to our organization’s support for growing within our current urban boundary. Bike Ottawa opposes the expansion to the urban boundary as proposed in the staff report.

Approximately 9 months ago the City of Ottawa unveiled its “Five Big Moves” as the foundation for the New Official Plan. These Big Moves and the recommendation of a massive expansion of the urban boundary are incompatible.

The City’s goal that by 2046, the majority of trips in the City of Ottawa will be made by sustainable transportation will not be met if we do not keep the current boundary. Expanding will result in longer travel distances that are not serviced by transit, walking, or bike trips. But we can reach the goal if we hold the line. The city knows cycling is an efficient, inexpensive, sustainable, enjoyable, and healthy way to get around.

Cycling and sustainable transportation modal share increases when travel distances are shorter and more convenient. When urban development is dense, destinations are closer together, which makes achieving the city’s goal of “15 minute neighbourhoods” feasible. Expanding the urban boundary will make trips longer, and will make places harder to get to via sustainable transportation.

What kind of city do we want? One that is dominated by single occupant vehicles? Choosing to ride a bicycle for any everyday trip is a choice not to use a different mode of transportation—a car, for example. This choice is informed by many factors, significant ones being convenience and safety.

The best way to make cycling more convenient is through mixed-use development and densification. In urban areas, a bicycle trip is faster than a car for trips under 5 km. Not coincidentally, most cycling trips in Ottawa are within 4 km. What will expanding the boundaries mean for choosing sustainable transportation? Is it realistic to think that all amenities will be available within a safe short bicycle ride in new communities. The city cannot force grocery stores, pharmacies, and restaurants to open up shop in every new subdivision.

Expanding the urban boundary decreases the convenience of riding a bike. It makes trips longer and destinations harder to get to. It means that we need to ask to build more permanent separated bike infrastructure further outside the city, when we have not provided that on roads that already exist. Commutes and other trips will continue to be dominated by single occupant vehicles. Further expansion is an inefficient use of resources. New developments means new roads. We struggle to maintain, service, and plow the roads that already exist. It’s not fiscally responsible or pragmatic.

Instead, we can make our existing roads safer and more appealing for cyclists and other vulnerable road users. Then, we can add more people to these areas through infill development. Riding a bike takes up less space, which means the capacity of the roads will increase dramatically at a fraction of the cost of expanding, widening, or creating new roads in new areas. If we hold the line on the urban boundary, we can better grow as a city without growing our automobile dependence.

Who benefits from expanding the boundary? The sentiment that “growth pays for growth” is simply not true. Development costs and property taxes never cover these costs, we are always playing catch up. If we hold the line we can build within, build smart. Cycling infra is less costly to build, maintain, and better for the environment, better for health, better at making a more liveable city.

The “no expansion” option is the surest way to increase density and the best way to achieve sustainable transportation goals, and the “Five Big Moves”. Holding the line on the urban boundary is ambitious and challenging. Meeting the target of 100% intensification by 2046 will take creativity and leadership. These aren’t reasons not to do it. Bike Ottawa asks that you reject the staff proposal.