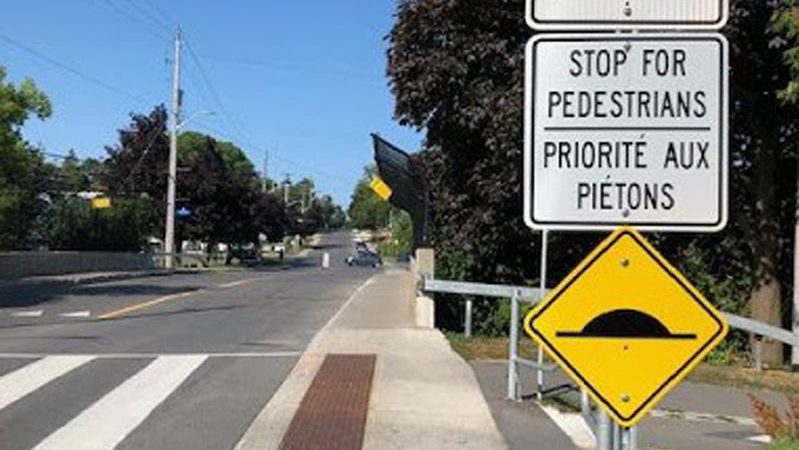 Here’s a riddle for you: what place in Ottawa has vehicles travelling in criss-crossing directions, but isn’t an intersection? The answer: any places where paths cross roads!

Sure, pathways may have pavement, lane markings, stop signs, and even a “street name” (e.g., Trillium path), but they aren’t roads, and therefore they can’t have intersections. Seriously. It sure is a mystery why this bizzare situation exists, but Bike Ottawa has found some answers…

Let’s take the case of the Trillim multi-use path (MUP). Over the summer, changes were made to the junction of the Trillium multi-use path (MUP) at Beech Street. First, the good: signage at this raised crossing was changed to reflect that pedestrians now have right-of-way, requiring auto traffic to stop for pedestrians. This is precisely the sort of measure that can help calm traffic on our streets and prioritize active transportation. Still, it is rather weak: drivers aren’t given a simple stop sign to follow… instead, there’s a pedestrian crossing symbol and a relatively wordy sign that says “stop for pedestrians”. Perhaps clear enough to you, our diligent reader, but we wonder how many drivers are truly prepared to stop for pedestrians here. Or at other pedestrian crossovers (as these are called). In similar set-ups, driver compliance is an abysmal 16-32%. So that’s the good news, such as it is.

The not-so-good news: the city did not extend this arrangement to cyclists using this crossing. Instead, the city has opted to add “Walk Your Bike” signs and to maintain the stop sign for cyclists using the path. This creates a confusing message for everyone:

In effect, cyclists have been assigned the lowest priority at this segregated bikeway crossing, with traffic on Beech (almost) always having priority.

“The option of asking cyclists to dismount and walk their bikes should not be relied upon in lieu of adequately accommodating cyclists through appropriate road design. Being propelled by muscular power, cyclists more than any other vehicle operators will prefer to sustain their momentum and avoid stopping. Cyclists usually find it difficult to rationalize why “dismount and walk” restrictions are in place, and conclude that they were a poor, illogical or arbitrary decision. Thus, if facility designs cause cyclists to make what they consider to be unnecessary stops, this will increase the likelihood that they will ignore or disobey traffic controls. Consequently, the Dismount and Walk sign Rb-70 (OTM) should be used only in exceptional cases, such as where an in-boulevard facility ends, and cyclists would discharge into a sidewalk or pedestrian zone.”

What’s unfortunate is there is no compelling reason for this arrangement of signage. The Ontario Traffic provides clear guidance for how people biking can be accommodated at all types of crossings, and there is no shortage of space here in Beech. Just as with the signalized intersection at the Trillium MUP and Carling, a crossride could be put in place to allow cyclists to legally proceed through the crossing without dismounting.

Traffic counts: Trillium may be busier than Beech

City of Ottawa bike counters near this intersection indicate that about 2,000 cyclists a day ride through this corridor, ranking it as one of Ottawa’s busier bikeways. It’s similarly well used by people walking, as well. Meanwhile, a 2017 study of traffic at the intersection of Beech and nearby Loretta had a daily count of 2744 motor vehicles. It’s not clear how many of those would have been travelling along Beech vs. along Loretta, but from the layout of streets it would be reasonable to expect that the traffic is shared fairly evenly between the two. So it could well be the MORE people use the Trillium MUP than use Beech street. So why does Beech have priority? When you consider that motor vehicles are more dangerous than people walking and biking, and that our transportation master plan makes statements about the importance of prioritizing walking and biking, it seems even stranger that the motor vehicles are permitted free circulation whereas people using the pathways are the ones required to stop.

Even all-way-stop (AWS) would be a further move towards shifting the requirement to stop onto motorists as away from those using active transportation. Here are the criteria the city uses when deciding whether an AWS is warranted:

Based on these criteria and existing traffic counts, our impression is that an AWS would be warranted here. The GREAT news: a traffic count will be conducted. Bike Ottawa reached out to councillors McKenney and Leiper (the O-train Trillium line is the border between their wards). The councillors both supported having a count conducted to be able to make data-driven decisions about (bike, car, and pedestrian) traffic in this area. They’ve asked staff to undertake a count, and we look forward to seeing the results.

The Trillium MUP is one of Ottawa’s busiest bikeways, providing a convenient link to the Rideau Canal Western MUP, Carleton University, the Albert/Scott MUP and Sir John A. MacDonald Parkway MUP. As such, its design should reflect the reality that a high number of cyclists use the facility to access work, school, recreation and community amenities. Putting a “Walk Your Bike” sign up at this intersection may solve some liability issues, but it doesn’t improve safety. Worse, signage like this creates the sense that the city hasn’t done its homework on how it can safely move cyclists.

The City can take simple steps to prioritize cycling at this intersection by taking down the “Walk Your Bike” sign, painting a crossride, and altering the signage on Beech to require drivers to yield to ALL pathway users. Add a recommendation for cyclists to slow and be cautious approaching the crossing, if there are fears of liability. This would give cyclists the same priority as pedestrians. Furthermore, we’d recommend a proper stop sign should be added for Beech street. However, there are reasons in the HTA why that isn’t currently an option.

In Part II of this post, we’ll explain why road users can never be asked to stop for path users, and how we’d propose solving this problem.