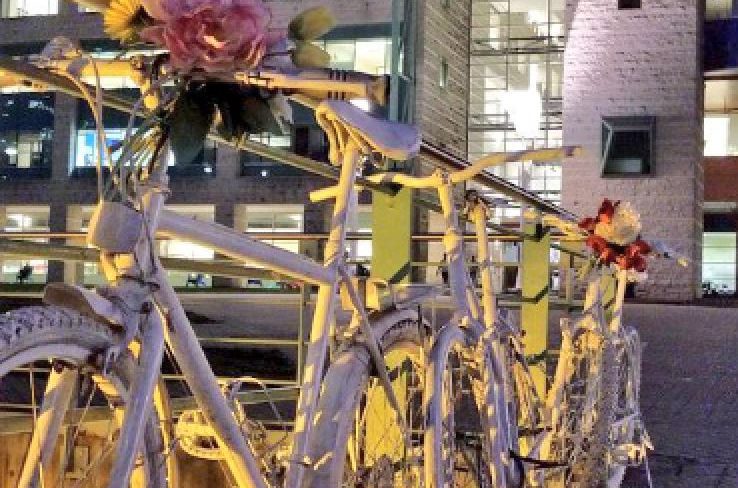 While the number of people using bikes in Ottawa continues to increase at a healthy pace, there are still growing pains that have left a mark on the city. Four cyclists lost their lives on Ottawa’s roads since May 2019, a toll not seen since 2012.

While cycling safety has improved in recent years, these fatalities remind us that we cannot be complacent, and must prioritize the safety of vulnerable road users. No loss of life on our roads is acceptable.

For four groups of families and friends, life will never be the same. Our city will be making some changes to those locations, in an effort to reduce the chances that any more lives would be lost there. But, do the changes go far enough? What’s the plan for the rest of the city? Or will there be another collection of memorial ghost bikes in front of City Hall in 2020…

On May 22nd, a man on a bike was struck by the driver of a minivan as he rode westbound in the floating bike lane in front of City Hall. In response, the city implemented changes to the Laurier bike lane in August. Drivers entering Laurier Avenue via the Queen Elizabeth off-ramp must now stop instead of yielding, and just merge into the through traffic lane across the bike lane, rather than merge from the right-hand turn lane. Drivers wishing to turn right onto Elgin must cross from the through lane at a specified area, delineated by flex posts. While this arrangement reduces the amount of conflict between turning cars and people on bikes, concerns remain over the fact that the flex posts being used to segregate the bike lane will come down for the winter, leaving the bike lane unprotected for up to 6 months of the year. Fortunately, a protected intersection that will provide better segregation is expected to be installed at Elgin and Laurier in 2021.

Another action the city committed to as a result of this fatal collision is a review of intersections with high volumes of people on bikes. While this review won’t likely capture many of the dangerous floating bike lanes that are in place across the city, it will nonetheless give cycling advocates an opportunity to push for improvements to dangerous areas for cyclists.

The second fatality of the year involved a man on an e-scooter who was struck by the driver of an SUV on westbound Hunt Club just west of Merivale Avenue. While few details were made available as to whether the collision happened in a bike lane or through lane, it is clear that this is not a bike-friendly area. The response of Ottawa Police that e-bikes and scooters are expected to use bike lanes is disappointing, as riders may use any part of the road as necessary, and places the onus for road safety on cyclists instead of safe road design.

The third fatal collision of 2019 occurred when Simon Peter Khouri, 13, was struck by a car driver while he biked across the on-ramp for Highway 174. While the city was quick to act, trimming growth away from signage warning drivers of pedestrians and cyclists crossing, and repainted the crosswalk, it is discouraging that basic maintenance only happened as the result of a fatality. On September 9th, Orléans Councillor Matthew Luloff announced that he had directed city staff to assess the prioritization of work to improve this intersection for pedestrians and cyclists as part of LRT Phase II, with a view to starting this work in Spring 2020. Look closely at the satellite views of Orléans. You’ll see that greenspace corridors that were set aside on either side of the highway, an opportunity to build future car-free crossings. We aren’t aware of any plans to take advantage of that opportunity.

On August 7th, Idan Azrad was struck from behind by the driver of a car and succumbed to his injuries on August 28th. Local Councillor Laura Dudas’ office has indicated that city staff has recommended changes to pavement markings and signage to raise awareness of cyclists on the road. Bike Ottawa members spoke with the Councillor, offering solutions such as using flex posts to prevent passing and narrow the road, and lowering the speed limit from 80km/h to 50km/h to match the speed of the adjacent community and reduce the possibility of collision. At this time, there is no indication that these suggestions will be acted on. Instead, it would appear that the city is pinning its hopes on extending another road with bike lanes through the area at some point in the future.

Throughout the summer, Bike Ottawa and our partners at Ecology Ottawa and the Healthy Transportation Coalition have pushed the city to adopt a Vision Zero approach to road safety that will prioritize the safe movement of vulnerable road users. While the cycling community has been vocal in its support for such a strategy, it will be important to have people from all parts of the city who travel by different modes voice their support for this approach, since no death or serious injury on our roads should be acceptable. City Council will consider an updated Road Safety Action Plan this fall. Let your City Councillor and the Mayor know that it needs to include a strong Vision Zero strategy to make our streets safe.

Make your voice heard! Contact your councillor by email (firstname.lastname@ottawa.ca), and tell them that safer roads are important to you.