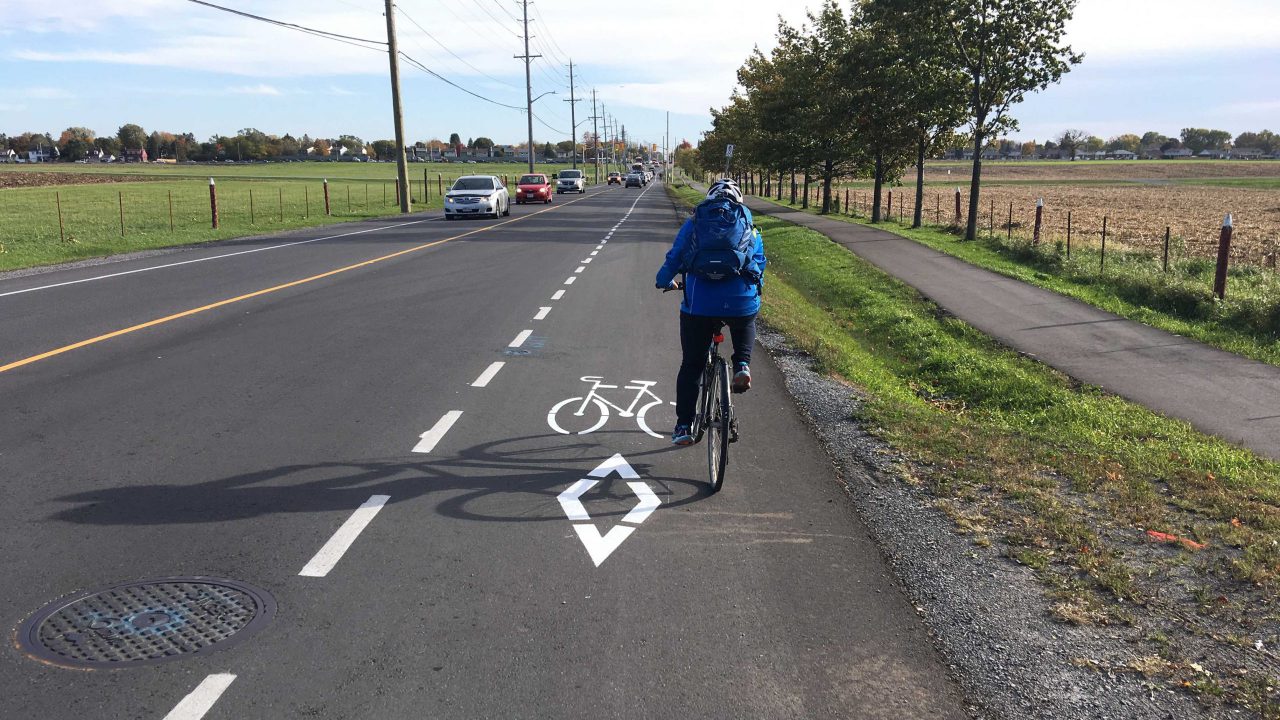 In November 2018, Bike Ottawa expressed concerns about missing links in the Fisher – Baseline area in a letter to the city. This newly paved stretch north of Baseline ends at Baseline. And then… nothing.

As the city is expanding its cycling infrastructure, it bumps into new challenges. The Nepean Trail is about to open if King Winter cooperates and stays away a bit longer: this will open up a safer connection parallel to Merivale.

However, it ends on Baseline, where there is no cycling infrastructure for years to come. Likely, residents will follow Sunnycrest instead and end up at Fisher. Unfortunately it is hard to cross Fisher to go northbound towards the Farm.

Which brings us to the missing bike lanes on Dynes. Dynes underwent major renovations. The road has been narrowed somewhat by adding a sidewalk part of the way where it was missing and bike lanes were added. There are also Dutch-style protected intersections on both ends. Dynes looks a lot better.

The reason why there are no cycling connections to Dynes is that the work at Dynes was not a cycling improvement, but a sewer improvement. This is why there is no plan for the area for integrated cycling infrastructure. This happens often and this is why you see cycling infratructure ending all of a sudden. But it doesn’t help residents.

This is why Bike Ottawa asked for three modest improvements, that would all be very affordable to implement:

1. A safer crossing from Malibu on Fisher, perhaps by adding a simple pedestrian refuge such as at Carleton U at Hartwells Locks;

2. Bike lanes on Fisher between Meadowlands and Dynes to Baseline on both sides, requiring only paint to install;

3. A safer connection from Baseline NB towards the start of the bike lane; we suggested green thermoplast rather than sharrows.

While city staff recognised the issues, as you can read in the response below, there is no approved or funded plan to change the current configuration. Bike Ottawa is not only concerned about cycling in this stretch of Fisher, but also worries about pedestrians and the run-for-your-life access to the bus stops. We know very well how to engineer safer streets, but finding the budget to implement improvements is the perpetual challenge. We’d ask of those on council making the decisions at budget time to keep safety at top of mind. Lives can quite literally be saved by decisions made around the council table.

Our November 5, 2018 letter in PDF can be read here and the city’s answer is printed below.

Thank you for your suggestions on improving the cycling infrastructure on Fisher Avenue. As you indicated, the proximity of recent reconstruction and resurfacing projects have created a relatively small missing link in the cycling network that would be valuable to address.  However, we do not see a quick and easy solution. While the roadway reconstruction and resurfacing projects provide great opportunities to implement cycling infrastructure, they do often create missing links which can take some time to resolve.  The Ottawa Cycling Plan identifies and prioritizes missing links throughout the City and this segment of Fisher Avenue will be considered in more detail at the next update to the OCP.

In addition to these recently completed projects in this area, the Baseline Bus Rapid Transit project is currently at detailed design with potential implementation in the not too distant future, subject to Council approval and funding availability. The Baseline BRT project includes major modifications to the Baseline/Fisher intersection including cycling infrastructure on all intersection approaches. As a result, roadway modifications that would fix this missing link will be most effective in coordination with the construction of the Baseline BRT.