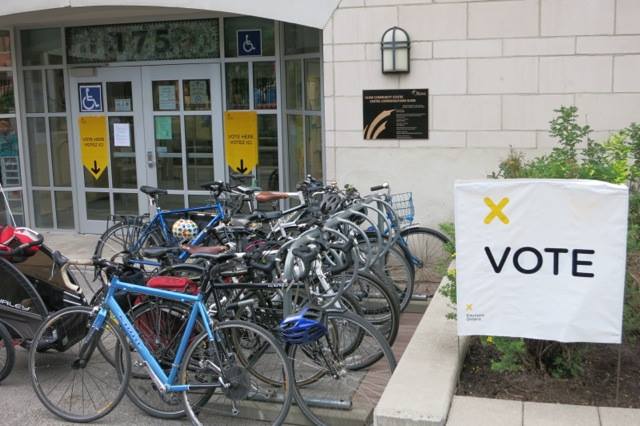 (For the record, we are suggesting ideas, not blaming anyone).

The candidates we elect on October 27 will determine how strongly cycling-friendly projects and programs are championed in your community. With calmer streets, more greenspace, and less traffic congestion, bicycling can help make Ottawa a more liveable city.

Based on the input of the hundreds of residents who responded to our online survey, Citizens for Safe Cycling (CfSC) has developed this list of practical actions and policies – our cycling platform – that could be implemented in the next term of council to help make cycling accessible to people of all ages and abilities.

Link spending on cycling to ridership

CfSC asks that the city commit to an annual cycling investment of $20 million. That is only 2.5% of overall mobility spending, and is a commitment that is equal to the number of people who already ride. By demonstrating leadership in sustainability, and making a very small shift in how transportation dollars are allocated, Ottawa would be able to build more of the kind of high quality cycling-specific infrastructure that is needed to make cycling accessible to people of all ages and abilities, and will create a healthier, greener Ottawa years sooner.

Many cycling routes go through different jurisdictions. The lack of co-ordination means that infrastructure can be disconnected and inconsistent. Establishing a formal committee, including representatives from CfSC, the City of Ottawa, Ville de Gatineau, National Capital Commission, and local residents will help to identify opportunities for collaboration throughout the NCR, and assist in the design phase to ensure optimal outcomes when new cycling infrastructure is planned.

The “Vision Zero” approach to road safety is that no loss of life is acceptable. Where a road user may fail (none of us are perfect!), the road system should not. Through engineering, education, and enforcement, the goal of this approach is to continually strive to reduce fatalities and injuries on our roads. We recommend:

In response to our survey, we received hundreds of suggestions about much-needed cycling infrastructure, identifying sites all across the city. There were common themes, like bridges and missing links, as well as certain popular locations and destinations that were mentioned again and again. While there were far too many suggestions to list, here is a summary of what we heard:

Discussion points for your candidates

1. What piece of cycling infrastructure is needed next in this ward?
2. What would you do to help achieve Vision Zero?
3. Do you support funding cycling at a level that is equal to the proportion of trips made by bike?

From every perspective, creating a bike-friendly city makes sense. More mobility choices, a healthier population, less competition for road space and parking, a more appealing streetscape… The leadership to shift just a few more dollars into creating quality space for cycling could spark enormous change during this term of council. Let’s not shortchange ourselves by making only minimal progress towards creating a liveable city. Tell your candidates that you intend to make your vote count towards prioritizing the fun, active, and sustainable Ottawa lifestyle!