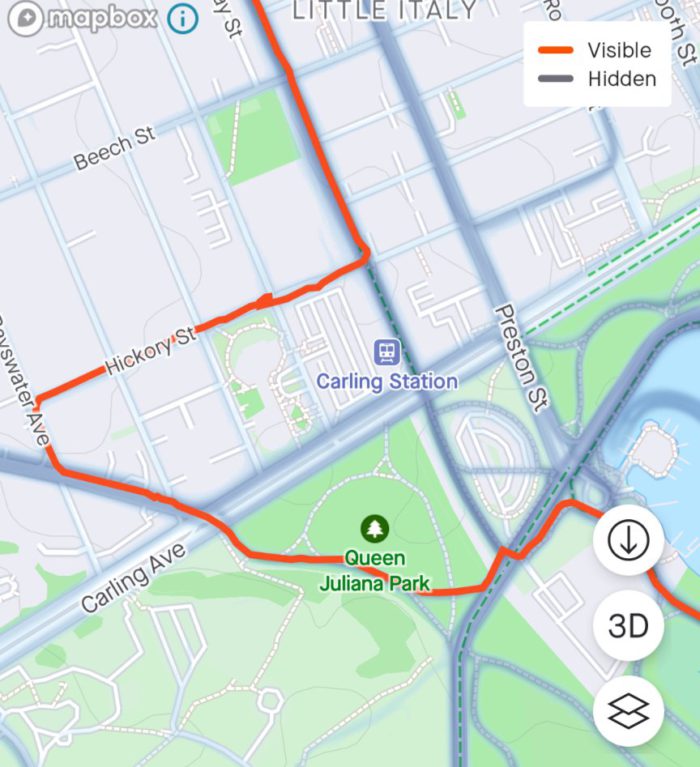 Bike Ottawa and communities around Ottawa have been fighting battles regarding LRT detours off and on for what feels like years. Earlier this summer we posted this blog about three separate LRT detours where the guidelines had been ignored, and detours had been put in place that were not intuitive, safe, or mindful of users outside of cars.

Over the last several weeks we have faced two more LRT related detours wherein guidelines have been seen as “inconvenient” and ignored.

Listen, we get that detours happen because of construction, but the way in which they are placed is important.

Members of the Board of Bike Ottawa have had meetings with the City regarding active transportation detours, and while the City staff we have talked to understand the issue, and are very willing to discuss how to make detours intuitive, safe, and direct, in reality, we continue to fight for this to be a reality.

Bike Ottawa’s work over the past two years concerning active transportation detours around construction sites focuses on putting vulnerable road users’ safety first. This is paramount as research published in the American Journal of Public Health in 2012 found that people using bikes to get around construction sites are at great risk of injury when proper detours are not set up.

Think of it this way, plan for an 8-year-old navigating a detour safely. If this is not likely to happen, then the plan needs to change.  We need to start thinking about how we make these detours happen, and not focus on the barriers that might make setting up the detour more difficult for a contractor.

Spend one minute observing how people on bikes are using the Carling Station detour: people use the most logical route along Carling and Champagne, and then return to the Trillium pathway.  If everyone is doing this, rather than following a signed route, then we should be planning on making this route safe for people versus directing them to an illogical route that is NOT SAFE.

Detours must be logical. Signage can help but should not be relied upon. People don’t read signage. There is missing signage on the Carling Station detour that would leave cyclists lost if they are not familiar with the area.

On the case of this specific Carling Station detour, there is an inaccessible portion that forces people over a curb on Prince of Wales through Queen Juliana Park.  Ramps should be used in cases like this; “Walk your bike” signage assumes that someone can walk.  (The Corso Italia Station detour relies entirely on this signage, so essentially there is no detour for people on bikes).

“Single file” signage puts people on bikes at great risk in the line of fire from fast-moving motorists. Along with “walk your bike” signage, “single file” signage should not be used in a detour. A properly traffic-calmed and low-volume street would not need this signage.  Speeds above 30kph and higher volumes should have cyclists segregated.

We proposed an alternative – replacing the pylons on Carling for the one block to Champagne, and using this space as a bi-directional bicycle lane. Routing people on bikes to Champagne, placing cones on Champagne and directing people on bikes back to the pathway. However, we have been told that reducing Carling Ave to one lane for 110 meters for a bi-directional bike lane to access Champagne (the most logical detour route), would impact “traffic” levels of service too much, and cannot be accommodated. Instead, people on bikes are provided a signed detour weaving through the residential streets and greeted now and then with “Single-File” construction signage.

Once again, this detour does not meet the guidelines for LRT detours that stipulates:

Key points of note: All detours will:

“shall install a temporary granular pathway for closures less than 7 days in duration. Where the trail, sidewalk, pathway or MUP is required to be closed for longer than 7 days, DB Co shall provide an alternate route with a minimum of a paved asphalt surface for the duration of the closure. “

“provide an alternate route that minimizes any detours for the pedestrians and cyclists, and is a maximum of 20% additional length.”

Multiple subsequent closures of less than seven days, shall not be permitted, and an alternate route shall be provided and shall include: (i) Smooth paved surface to meet Universal Design requirements; (ii) Curb cuts as required to provide barrier-free routes from pathways and sidewalks to roadway crossings; (iii) A minimum width of 1.8m for sidewalks, as per COADS; (iv) A minimum width of 3m for MUP; (v) Positive drainage to ensure no ponding on the travelled route; and (vi) Temporary routes shall be lit to the same level as the original route.”

Construction sites are often dynamic and these detours need to be also. Adjusting the pylons and/or barriers as needed.

Take, for example, the detour on Brookfield Rd construction over the past two years. Every day, the contractor would adjust the active transportation construction detour based on the construction activities of the day. Sometimes one traffic lane was used. Sometimes it was two lanes. They were flexible and it worked quite well when the multi-use pathway was closed.

It has been mentioned that Ontario Transportation Manual Book 8 requires “walk your bike” signage and so city staff have their hands tied. City staff were involved in collaborating in the writing of this manual. Therefore, it seems logical that the City would have clout in saying that this needs amending as it impacts the accessibility of residents. On this subject, we saw the email sent on August 30th entitled “Making construction sites accessible for all”. Unfortunately, this is not happening for people using bicycles (including adaptive cycles) in most cases. Bike Ottawa wants to see this change. This dialogue we are having is great. We need to continue this discussion so that we get better and better at making these detours work.

We’ve seen that the City has installed (sometime this week it appears) a cross-ride at Queen Juliana and Sherwood, painted “way finding sharrows” through the intersection, and a small painted bike lane on Sherwood heading north-bound.

Cross-rides are great, what a nice addition to the neighbourhood! Let’s build them everywhere, clearly we can install them a lot quicker than we were led to believe in previous years. But let’s also build detours that make sense, are safe and intuitive.

We leave you with a wonderful cycling detour in Montreal.  It was logical, direct, and safe.

Let’s make this our goal!