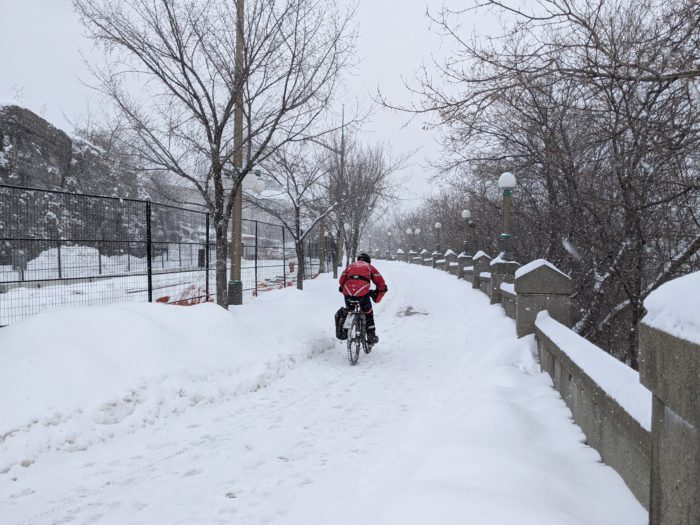 Can the City do better when it comes to clearing for bicycles in winter? It certainly can, and it might be encouraged to pick up the pace at improving conditions for residents after a Supreme Court ruling was recently handed down stating that municipalities are liable for the negligence of winter maintenance. The decision was based on a case where the clearing of snow left banks between parking and the sidewalk, resulting in personal injury. Canada’s highest court clarified that this was an operational decision, not policy, and therefore, snow removal was subject to court’s review.

What does this mean for bike lane clearing? It could be argued that creating bicycle lanes (especially painted lanes) but not maintaining them properly all year long in a safe manner (including winter) could put the city on the hook for liability claims if people ride (which they do!) and become injured while doing so.

“But no one bikes in winter” is the often-heard refrain when discussing using a bicycle for year-round transportation. But Ottawans certainly keep pedalling all year long!  In fact, numbers jumped 100% between 2015 and 2020 on our City’s Winter Cycling Network.

Bike Ottawa is convinced that a big part of that uptick is due to the City’s winter maintenance improving year after year. The network now has a dedicated budget, five dedicated snow maintenance vehicles and crews as of last year, and interim service delivery standards that had improved drastically from 24hrs to clear the network after a snow event in 2015, to 2019 when that time was reduced to 4hrs. We hope that an ongoing review of maintenance standards will keep us going in the right direction!

Of course, some areas of the network will continually be a challenge as they were not designed for winter use, for example, narrow sections of the decades-old NCC federal pathways along the Rideau Canal with poor drainage leading to ice buildup.  But even then, proper equipment, such as the Blue Gryb ice breaker could be an option to help with conditions like this.

But some areas of the network could be improved drastically overnight with some inexpensive design changes and another with adjustments to operations.  This is where we see the City could be liable – easy fixes that, for one reason or another, just never seem to happen despite the safety risk to residents.

Beechwood Avenue, though officially part of the current Winter Cycling Network, has never been appropriately maintained because of its design using painted lanes and a confusing patchwork of cycle tracks that maintenance staff cannot find after snow events. Painted lanes notoriously disappear in every city during winter when they are used for snow storage and snow banks force parked cars into the painted lanes, and so forcing people of all ages on bikes into car traffic.

The simple and quick solution is to shift car parking to the outside near live car traffic and place people on bikes next to the curb, separated with quick-build barriers such as concrete pin curbs used on Laurier Avenue, or QwickKurb barriers on Elgin Street.

Bike Ottawa has met with staff and area councillors on this solution but to no avail.  This could still be done before we get far into the 2021-2022 winter season.

Another area where the City could be liable is the operational standard of only removing snowbanks once 50% of the pathway is impacted with snowbanks.  Essentially, the already narrow mixed-use pathways must become inefficient one-way cattle tracks with people on bicycles travelling head-on, all while trying to avoid people walking in both directions before the City will entertain a 311 complaint. Then we wait days or weeks until action is taken.

How should the City of Ottawa interpret this ruling that puts them in a legal disadvantage? Let’s get the Winter Cycling Network expanded fast – residents are asking for this.  We seem to have stalled at only adding 10kms since 2015.  Active transportation is key for meeting our emissions reduction targets and goals for sustainable transportation, the city can work on meeting these with more properly winter-cleared bike lanes. Let’s design all future bicycle infrastructure to be winter-maintained, no more painted lanes (and get rid of the ones that exist), more maintenance equipment, and better techniques.

On a lighter note, perhaps a little rivalry for winter cycling maintenance is in order with one of our neighbouring cities. Montreal, only 200km from Ottawa, is quickly vying to become a winter cycling city with a goal of clearing 75% of a 900km network.  These are goals Ottawa should also aspire to, even if the impetus for such change happens to come from Canada’s highest court.  Let’s make some lemonade with those lemons!