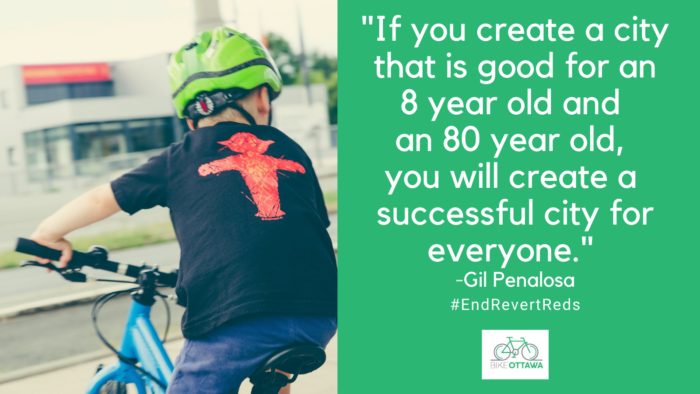 You may have read about it in the news, or seen the CTV video, Councillor Jeff Leiper has submitted a report and motion to the Transportation Committee to end Revert Reds.

We believe it is important for councillors at Transportation Committee and City Council to support this motion to end the dangerous use of Revert Reds in Ottawa.

Eliminating revert reds will provide similar protection to all-way red lights at intersections for drivers, or leading pedestrian intervals. Designing a city for all ages & abilities means designing for safety, but how do we expect kids to handle “yellow dots” and actuated signals? On top of issues of safety, we know that a city serious about reducing emissions is one that focuses on building safe sustainable transportation options.

We have written the following letter to members of Transportation Committee to support the end of revert reds.

I am writing today on behalf of Bike Ottawa to express our support for the motion to end the use of red reverts that will be considered at the Transportation Committee meeting on December 1st. As the report submitted by Councillor Leiper indicates, red reverts pose a safety issue for people on bikes, and those who use mobility devices when they prematurely move off a traffic light sensor. The resulting cancellation of the anticipated green light, and return to a green signal in the cross direction may put these road users at risk of serious injury or even death.

Bike Ottawa is concerned that the analysis provided by city staff raises objections to ending revert reds largely based on concerns around maintaining traffic flow. We believe these concerns are overstated, given the low likelihood that a significant number of traffic signals will be attenuated by people on bikes or mobility devices that did not intend to proceed through the intersection. Regardless, we believe that safety is of paramount concern, and should be prioritized over other considerations.

It is also important to note that equity between modes of transportations is supported by this motion. A safe transportation system should take into account observed behaviour of users. We can see examples of how this is done in our city: as with countless other municipalities, Ottawans can expect that when they stop at a traffic light, there will be a brief all-way red light, so that if someone cannot or does not stop a vehicle safely, proceeding through the intersection does not automatically lead to tragic results. Roadways are often built to a higher functional speed than the posted speed limit, to lower the possibility of serious crashes or collisions should a person driving an automobile make an error in judgement. Many busy intersections will also include a leading pedestrian interval, allowing pedestrians the opportunity to assert their right-of-way in order to cross safely.

In all of these instances, the safety features that have been built into our system respond to behaviours by road users that contravene the Highway Traffic Act. Yet, staff state in the report that they cannot support eliminating red reverts because to do so would somehow condone lawless behaviour by people on bikes. While it is understood that road users should obey the provisions of the Highway Traffic Act, we must also acknowledge the fact that people’s behaviours, whether through misdeed or miscalculation will sometimes not comply with the law. Regardless, no one, no matter how they travel on our streets should suffer the risk of injury or death as a result.

For these reasons, Bike Ottawa is asking that you, as a member of the Transportation Committee, support the motion to end red reverts. By eliminating red reverts, Ottawa can show leadership in making streets safer, a critical component of making our streets liveable, and encouraging the development of 15-minute neighbourhoods as envisioned by the new Official Plan. I would be glad to discuss any questions or concerns you may have about this issue should you be interested.

Here are some common questions that come up on the topic of red reverts.

Q: What’s a red revert?
A: A program in traffic signals. Some intersections have bike sensors that can trigger a green light for the person biking. If for any reason the sensor stops detecting the person before they get the green light, the signal reverts to red—that is, the person doesn’t get their green light.

Q: Why are red reverts so dangerous?
A: The main reason is people think they’re about to get a green light, but then they don’t, and meanwhile, traffic in the other direction has a green light and people are stuck in the middle of the intersection. (For a video, see here.)

The sensor can stop detecting a person for any number of reasons. For example, the person may leave the sensor too early—including even during the “all red” phase—or the person shifts their weight, and the sensor doesn’t detect their new position.

Q: How can I tell if an intersection is equipped with red reverts?
A: Unfortunately, you can’t really. Red reverts are controlled by software in the traffic-light system, so knowing you might be endangered by one requires insider knowledge.

Q: Why does the City of Ottawa have red reverts in the first place?
A: Unfortunately, traffic engineers largely prioritize smooth motor vehicle flow. Bike Ottawa believes that protecting people from any harm is more important than convenience for drivers. We regularly advocate to the City to reconsider their priorities, but it’s an uphill battle.

Q: How long has the City known red reverts are dangerous?
A: A CBC article already raised the question in 2013, but anyone who has been caught by one will have known immediately.

Q: What is “amber lock”?
A: This is something the City’s traffic engineers designed instead of eliminating red reverts. When it works, it makes sure people detected by the bike sensor at least get an amber signal before the light changes on them again. These were supposed to be 10 seconds but ended up being 5 seconds—but they’re also unreliable.

Q: Will eliminating red reverts slow down emergency response times?
A: It seems very unlikely. There would be relatively few instances where a person on a bike would actuate a signal and not continue to cross the road. Emergency vehicles are equipped with sirens and lights that help them clear a path through intersections, regardless of whether they have a red or green. Most cities around the world do not have such systems in place, and their emergency services function as expected.

Q: Will eliminating red reverts slow down OC Transpo?
A: It seems unlikely. There are numerous factors that affect bus times, and because there would be so few instances of actuated lights that are “unused”, the effect should be negligible.

Q: Will eliminating red reverts increase greenhouse-gas emission?
A: It seems very unlikely. There would be relatively few instances where a person on a bike would actuate a signal and not continue to cross the road. At the same time, making our city safer for people to bike in means fewer cars on the road—so in fact eliminating revert reds should help the City meet its climate goals.