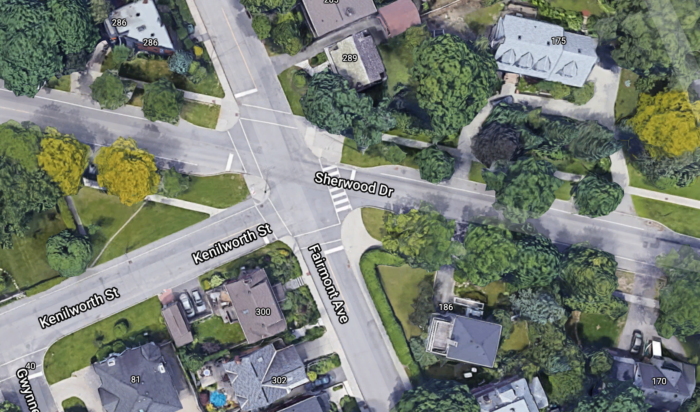 In July of 2020, the City placed seasonal traffic-calming flexposts on Sherwood Drive. After several months, residents were asked to participate in a survey about their experience on Sherwood Drive. We wrote about this survey and the need to create a proper “CycleWest” in our blog. Having proper bike lanes on Sherwood makes a lot of sense, it’s already a well used street by people on bikes, and bike lanes could connect to Trillium Line pathway via Hickory street (and Carling Station), leading to Holland Ave and the Byron bike lanes.

A year later, as part of the Sherwood Drive Traffic Calming Study, the City implemented a trial closure of Kenilworth Street where it intersects with Sherwood Drive and Fairmount Avenue. The City placed three concrete planter boxes at the head of Kenilworth Street, making a five-way intersection into a four-way stop. Access for people on bikes and people walking and rolling was maintained.

The “trial closure” has come to an end and the planters are being removed, but the seasonal flexposts on Sherwood have been in place again for spring/summer/fall 2021 (they were removed for snow-removal purposes just this week).

Another feedback survey is expected to be issued over the next couple of months, and the City will be conducting a traffic study for the area to evaluate how the closure impacted the area.

We’ll look forward to seeing that, but in the meantime, we’ve written to the City with our concerns and recommendations for Sherwood Drive, and the need for proper protected bike lanes. The painted line for parking is all too often thought to be a bike lane (it’s not), and we’ve heard from many that drivers often misunderstand this painted line and can become aggressive, thinking someone isn’t using the bike lane, when none, in fact, exists. This confusion, coupled with the bulb-outs at intersections, makes riding here dangerous when it does not need to be, and where there is plenty of room for proper bicycle infrastructure. The “loss of parking” shouldn’t pose a problem since the majority of the day parking on Sherwood is not allowed.

As the new Civic Hospital develops, we can expect Sherwood Drive to see more use by people on bikes, and so we need to ensure this street is safe for those who bike, and those who would like to bike here but are currently uncomfortable with sharing the road with motor vehicles.

Below you’ll find our most recent letter on the subject:

Bike Ottawa is a non-profit, volunteer-based organization that advocates for safe bike infrastructure in Ottawa. We would like to comment on the Sherwood Drive traffic calming study.

We are pleased that the City of Ottawa has responded to residents’ concerns about the safety of residents and initiated this study. As the “As we heard it” report indicates, the safety of vulnerable road users is a significant concern in this area.
This corridor is well-used by people on bicycles, particularly those in Kitchissippi Ward accessing destinations like Dow’s Lake, Dominion Arboretum, the Experimental Farm, and Carleton University. Data from Strava’s Metro program indicate that in 2019, an average of as many as 450 people biked on Sherwood every day, or 13 750 per month (see below).

Calculation based on approximately 550recorded trips per month, where trips recorded on Strava represent 4% of all trips taken. Moreover, the trend from 2018 to 2019 is clearly increasing substantially, and so we expect that even more people biked through this corridor in 2020 and 2021, and that this trend will continue.

Yet, as the “As we heard it” report points out, this corridor is unsafe for many vulnerable road users. This is also borne out in heat-map data from Strava Metro, which shows that a substantial number of people biked on the sidewalk (see below). No one understands better the dangers of a corridor than those using it.

Bike Ottawa holds to the principles of Vision Zero—that we should continuously and preemptively remove the very possibility of injury from our transportation systems. For this reason alone, this area should be improved in the ways we recommend below. We also note that those living in the immediate vicinity also perceive the corridor as unsafe. This will disincentivize its use for people’s mobility needs, even while the City of Ottawa’s own official documents commit to incentivizing active transportation.

Two parts of this study interest us in particular: 1) the intersection of Kenilworth, Sherwood, and Carling, and 2) the Sherwood Drive corridor.

With regard to the intersection, we were pleased to see the pilot project with filtered permeability barriers blocking car access to Kenilworth. This measure makes the intersection safer for all people using mobility devices, walking, or biking. Most importantly, the area is made safer for children in the area, as the “As we heard it” report observes. We therefore recommend that this measure be made permanent.
We also agree with the report’s recommendation that turn radii of the intersection of Sherwood and Carling be made tighter. Tightening turn radii is well known to encourage motorists to reduce their speeds. Given the high traffic of this intersection, implementing this measure will improve safety for all.

With regard to Sherwood Drive, this corridor in its current configuration is unsafe for vulnerable road users. As the report observes, the combination of bulb-outs and parking is confusing for drivers and people on bikes: when empty—which they often are—the car-parking facilities resemble a bike facility, yet the frequent bulb-outs force people on bikes out into car traffic.

While the bike-friendly bulb-outs identified in the report would represent a step in the right direction, we agree more with the calls for unidirectional cycle tracks on either side of the roadway. As observed in the report, there is ample space for cycle tracks, and the majority of residents would support converting car-parking facilities to biking facilities. Providing cycle tracks would have the added benefit of narrowing the roadway for cars, a measure well known to encourage motorists to reduce their speeds. The net result would therefore be improved safety in the area for not only people on bikes, a priority identified in the report, but also people using sidewalks and children playing in the area.

We find these changes all the more important in light of the future construction of a new campus for the Ottawa Civic Hospital at Dow’s Lake. The Transportation Impact Assessment and Mobility Study (revised) for this project notes concern for increased use of Sherwood (pp. 77–78). The measures we recommend would help manage this increased use and incentivize accessing the hospital by sustainable transportation modes. As noted in the report, these improvements should be made well in advance of construction of the new Civic campus.

We thank you in advance for your consideration of our feedback on this project. We would be glad to work with you and the City of Ottawa over its course. Please do not hesitate to contact us if you have any questions.