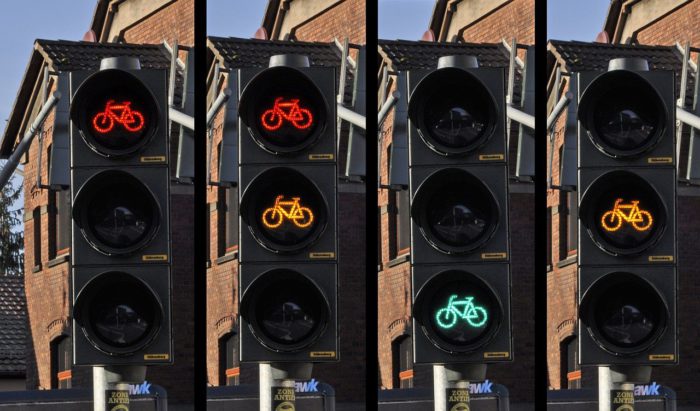 Bike Ottawa recently updated its external policies to reflect the shifting knowledge and expectations around how we create safe streets for people to bike, walk, and roll, and to reflect the need to create equitable and inclusive streets for everyone. To address this, Bike Ottawa has created the following Complete Streets Policy:

Bike Ottawa advocates for complete streets as a means to facilitate a shift to active transportation-based mobility, as a means to address access for equity-seeking groups, and to improve the liveability of our streets.

What are complete streets?

Complete streets are streets that provide space for the safety of all users. The starting point for complete streets is the Vision Zero paradigm for safety: the needs of the most vulnerable users – people on bikes, people who walk, and people who use mobility devices – should be placed at the centre of street design to ensure they can use our streets safely. By removing the threat of road violence, cities can significantly reduce the threat of serious injury and death, while making our streets liveable public spaces.

Complete streets must also address the diversity of users, including women, racialized communities, LGBTQ2+ and other marginalized communities. Equity must also be at the centre of consultation and design, so we can ensure that everyone can use our streets as public space safely and securely.

How do we build complete streets for people on bikes?

Rather than relying on ineffective education campaigns and police enforcement to attempt to improve safety,  “complete streets” use design to achieve safe outcomes. For example, by narrowing streets, implementing year-round traffic calming measures, and eliminating through traffic, automobile speeds can be lowered, reducing the risk of injury and death for everyone. Creating protected intersections by always prioritizing the safe movement of vulnerable road users through design, given the elevated risk for conflict and injury at intersections, means that we prioritize safety versus drivers saving a few seconds. Based on international best practice, and the implementation of bike infrastructure in Ottawa, Bike Ottawa firmly believes that dedicated infrastructure that provides space for people on bikes to travel separated from automobile traffic is the most practical way to increase the number of people on bikes and provide equitable access to safe biking infrastructure. In practice this means prioritizing the following design principles to make complete streets:

In all areas, except in very low predicted volume areas or short neighbourhood connections areas, designs should also segregate people who bike from space for people who walk and slower active transportation modes by providing dedicated space and appropriate features to ensure their separation, including landscaping, grade separation, and tactile treatments to aid the visually impaired.

In predicted low-volume settings and short neighbourhood connections, mixed-use paths (MUPs) may also be employed. Because of the differential speeds between modes when traffic increases on MUPs, competition for space between people using bicycles, those walking and people who use mobility devices, safety concerns arise for all users. As such, this type of infrastructure is not appropriate in most areas.

Paint Is Not Infrastructure

Painted bike lanes are sometimes seen as a means to create space for people on bikes on city streets. Reconfiguring lanes to add a bike lane is sometimes perceived as an easy, cheap solution to a real safety problem. However, the lack of spatial separation limits the usefulness of painted bike lanes, as they are often hampered by illegal stopping and incursions from people driving cars, and afford no real safety enhancement.

As such, Bike Ottawa only recommends the use of painted bike lanes as an interim solution when building dedicated infrastructure is not immediately feasible but there is a need to provide dedicated space for people on bikes. Painted bike lanes should also make use of treatments that will provide some spatial separation, including buffer zones between general traffic lanes, parking lanes, and bike lanes, and/or the use of flex-posts to create a more defined space. Streets with painted bike lanes should be designated with a 30km/h speed limit, with supporting traffic calming measures to lower the risk to people on bikes associated with mixing with motorized traffic.

Bike Ottawa does not recommend the use of sharrows. Sharrows only indicate that people on bikes may use a traffic lane – something already permitted under the Highway Traffic Act. Sharrows at best may give people on bikes a false sense of safety, and make streets less safe for people on bikes.

Minimizing the need for enforcement is a critical step for making public space safer for members of BIPOC communities, women and LGBTQ+ communities. Given the history in North America of using traffic infractions and moving violations (“driving while black” being a prime example) as a pretense for the harassment of BIPOC community members, enforcement remains problematic and only serves to highlight the inequity that frames who gets to use public spaces.

Along with design, cities have other tools to reduce the need for enforcement, including using camera technology to capture traffic violations such as speeding and running red lights. Using such measures creates certainty for road users in knowing that there is a low likelihood of evading penalties for risky or dangerous road behaviour. Bike Ottawa supports the use of these technologies across the city, as they have been shown to reduce speeds, helping to make streets safer.