If you follow social media or listen to the radio you know the local news in the morning and the evening is filled with traffic reports – often telling drivers where a crash has occurred and to “expect delays” or “find alternate routes” if streets are closed. Most of the time, we hear nothing more than if the street has reopened. This is the case for people who drive, but the same is true when people who walk/roll or bike are in a crash with a person driving a motor vehicle.

Just last week the CTV News twitter account sent out three different tweets about traffic delays due to collisions involving people on bikes in Ottawa in a single afternoon. These only made the news because they disrupted traffic, but we know from the city data that hundreds of people are involved in collisions every year, but it is rarely mentioned, unless traffic related. And, in many cases injuries go unreported, that data lost.

While we know it’s happening frequently on our streets, it’s often overlooked, and we rarely know faces or names of people who are injured, but in many cases crashes leave people in recovery for many years, and in some cases, a person never makes a full recovery.

You can imagine then, that we were interested to hear from Andrea Flewelling (known as @likewalkingsunshine) via Instagram when she tagged Bike Ottawa in a post writing:

“My next sale w @full_circle_thrift_ottawa will be with @vintage.pop.up.613 this Sunday @vimybrewing – as it is taking place on the 5 year anniversary of my big bike accident (t-boned by a car, leg smashed, 3 surgeries (and counting?), a life altering experience) I’ll be donating my proceeds from this sale to @bike_ottawa – an excellent safe cycling advocacy group in ottawa!” 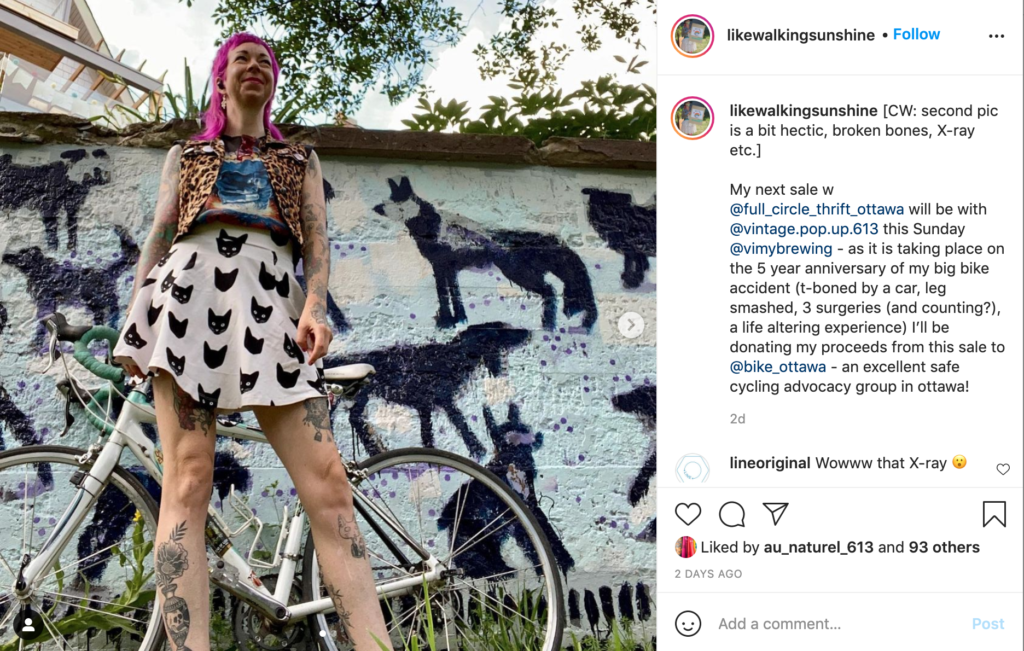 Andrea runs Full Circle Thrift Ottawa, where she sells vintage and pre-loved clothes, and donates proceeds to local charities. We are grateful that she thought of us, but we wanted to know more. We asked Andrea if she would be comfortable sharing her crash story and recovery with us. She agreed, and here’s what she wrote (note, it’s a bit graphic, so, warning before you continue!).

“My bike accident happened on September 12, 2016. As per usual, I’d left my place at Holland/Wellington just before 6am on my way to practice yoga at a studio in Centretown before work. I was heading east on Wellington St. As I approached the T-intersection at Wellington and Irving an oncoming car turned left onto Irving, notwithstanding the fact that I’d already started my way through the intersection going straight. I saw the headlights, tried to get myself out of the way, but of course they were driving much faster than I, and so they nailed me on my left side.

I don’t remember this part – but based on the smashed windshield (and a bystander’s report) I went up on the windshield and then rolled down to the ground. I landed in the middle of the intersection on my butt. I was surprisingly calm when I looked down and saw that my left leg was awfully wobbly – as in like – it seemed like jello now between my knee and my foot. I remember saying out loud “Help, my leg is broken”.

A woman had witnessed the crash from inside her condo and thankfully called 911. She was able to find my glasses (which weren’t broken!) and my backpack- the force of the collision had literally ripped the straps off the backpack and they were now just hanging useless off the back of the bag.

Emergency vehicles arrived pretty quickly, the driver was charged- although only with failing to yield or something, and only paid a fine. I was told he was at fault and given the police report number.

When I got to the hospital and x-rays were taken it was seen that I had a pretty smashed up tibia and fibula. A 6 hour surgery to put things back together with plates and pins happened the next day. I was non-weight bearing for  3 months with a gradual return to weight bearing over the next, gosh, probably close to 2 years.

I walked with a cane for at least a year and a half after the crash. The bone struggled to heal. I narrowly avoided a bone graft by purchasing a special bone stimulating ultrasound machine. I had some of the hardware removed in 2019 which helped to relieve a lot of the pain but the leg has never been the same. Related to the overcompensation my right leg did to make up for my busted left, I had knee surgery last December (a cartilage transplant).

I haven’t been able to walk pain/discomfort free since the crash, but I maintain a positive attitude. I keep on cycling (got back on as soon as it was safe to do so) and I try to stay as active as I can but I know my legs will never be the same after the trauma they (and I) experienced.”

We’re grateful to Andrea for allowing us to share her story, we know there are many others. We know that most crashes are not even recorded in official sources of traffic crash data, this makes it difficult to make evidence informed decisions about safety intervention. If you’re interested in reading more about this, we recommend checking out bikemaps.org and their recent study examining crowd sourced crash reports and near-miss data. In the meantime, we’ll continue to advocate for a true commitment to Vision Zero in our city because no one should be injured or killed on our streets.