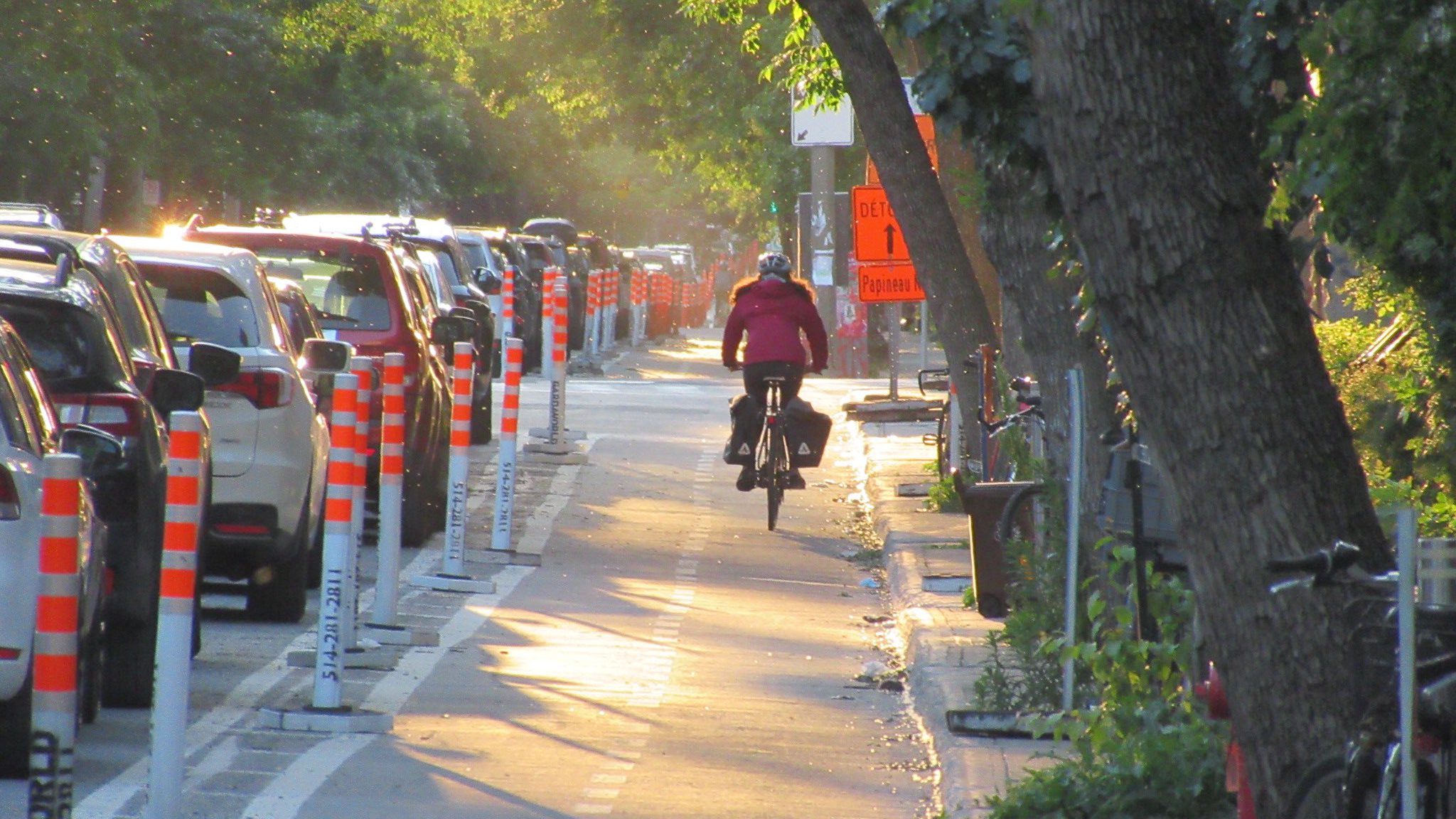 Cities across Canada and the world have been implementing temporary measures to enable safe cycling in order to take pressure off of transit systems trying to ensure physical distancing, and to encourage people to visit local businesses. Bike Ottawa wrote to city council to encourage Ottawa to do the same, however the city has decided not to pursue any city-wide measures to enhance active transportation. Read our letter and the response from city staff.

Here is our letter:

Bike Ottawa was pleased to read your letter dated May 28 asking for Council to request the federal and provincial governments to fund previously planned active transportation projects in Ottawa. Getting these shovel-ready projects built will help in Ottawa’s economic recovery and get more people riding bikes. We look forward to Council moving ahead with this.

We are also glad that the letter acknowledged how COVID-19 is shifting Ottawa’s transportation patterns. These new ways of getting around have also caused new problems.

More people are walking and cycling; parks, sidewalks, and pathways are crowded. Fewer people are driving; empty roads enable dangerous driving. Transit use is low, and will likely stay low as cities recover; people will need a transportation alternative that doesn’t add more cars to the roads and increase congestion.

On these issues, we believe the City can do more and act faster.

Bike Ottawa is calling on the City of Ottawa to immediately implement a temporary city-wide active transportation network in response to COVID-19 and to aid in the city’s recovery.

This network for pedestrians and cyclists should involve the following measures:

Performance should be evaluated, and successful measures should then be installed permanently.

Cities all over the world and in Canada are taking action to make it easier for their residents to get around now to prepare for a sustainable transportation shift in the future. The City of Ottawa should take inspiration from the vast array of projects implemented by these cities, and replicate successful initiatives here.

The two closest major cities to Ottawa are among the most ambitious.

On May 28 Toronto City Council passed a rapid 40km expansion of the city’s cycling network. Part of the new quick-build temporary bicycle infrastructure will run on top of the city’s subway lines. Mayor John Tory explained: “This is going to mean we’ll take some pressure off our transit system and protect the health of the city…Bikes bring business. [This] is going to help people get around to those businesses.”

Ten days earlier, Montreal Mayor Valerie Plante announced 327km of new facilities for pedestrians and cyclists. Plante said these “will make Montreal a pleasant and safe city where everyone can get around respecting physical distancing, rediscover their city and encourage businesses.” Bike lanes are being quickly added to Montreal’s streets—some popping up overnight.

We believe that the City of Ottawa can be just as ambitious with its own made-in-Ottawa solution for liveable streets based on active transportation.

The request for funding to fast-track existing projects is a good start, particularly if the projects selected are citywide and promote connections with existing infrastructure. Initiatives such as opening the NCC parkways, a segment of Byron Avenue, and two lanes of the Bank Street Canal Bridge for active transportation have been supported by residents of Ottawa, and demonstrate the need to do more.

A rapid installation of additional space for pedestrians and cyclists is necessary to immediately improve how we get around during the pandemic and prepare for transportation impacts into our economic recovery.

Bike Ottawa urges you to move forward with fast-tracking planned infrastructure projects, while also immediately implementing an active transportation network in response to the COVID-19 pandemic.

Bike Ottawa Board of Directors

Here is the response from the city:

Thank you for your email and suggestions on how the City can provide more infrastructure for walking and cycling. Your email was forwarded to me for review and a response.

The City has an active transportation master plan (in the form of the 2013 Ottawa Pedestrian Plan, and Ottawa Cycling Plan) that identifies the policies and projects that make up the pedestrian and cycling network, to year 2031. These plans are currently being updated to align with the new Official Plan’s planning horizon year of 2046. The 2013 plans can be found here, and the update work-in-progress can be found here. You can also view the extensive network on geoOttawa.ca (existing facilities and planned). Currently, we have over 980 km of cycling facilities, including over 356 km of multi-use pathways. Between 2015 and 2019, investments helped build 135 km of new cycling facilities, including three multi-million dollar active transportation crossings: the Adàwe, Flora, and Max Keeping bridges.

In just the last term of Council, $81M was invested in stand-alone projects, a significant portion of which was funded through “green” programs offered by the provincial and federal governments. This amount does not include City funding for cycling facilities and sidewalks that are constructed as part of road reconstruction, new road and transit construction, and as a condition of development approval. This current Term of Council has earmarked $28M for just the stand-alone active transportation program, and more investment could be expected with federal stimulus funding. City Council remains committed to building more permanent sidewalks and cycling facilities as outlined in City plans and policies.

As you know, at the City Council meeting of May 27, 2020, Council approved a motion to join the Federation of Canadian Municipalities, Association of Municipalities of Ontario and other Canadian municipalities in calling on provincial and federal governments to provide direct emergency operating funding. Further to this motion, the Mayor along with Deputy Mayor Dudas, Deputy Mayor Luloff, Councillor Leiper, Councillor Brockington and Councillor Gower asked that this funding from provincial and federal governments be used to support the development of Ottawa’s Active Transportation Networks. The City is committed to continuing to support active transportation networks as the City recovers from COVID-19.

At the meeting of June 10, 2020, Council approved a motion to authorize the temporary road closure of segments of any City road as a temporary measure through to October 31, 2020. This is part of the City’s economic recovery efforts in order to support the local economy by providing greater flexibility for expanding outdoor patios and restaurants on City rights of way. Staff are currently working with local businesses to identify potential roadways and to implement these closures to increase the size and number of patios. In terms of your suggestion to reallocate space on main streets from parking to people to help pedestrians and cyclists support local businesses, at the May 27 meeting, Council approved a motion whereby 2/3 of businesses along a block would need to approve the removal of parking to provide for this additional space. Please note that the loss of convenient parking also affects our residents who have mobility challenges.

With regards to temporary allocate roadway space to provide more room for cycling and walking, we continue to work with ward councilors to identify specific locations where there might be a pinch point and where allocating some space on the road to pedestrians and cyclists is feasible. However, It should be noted that the situation today is very different from the start of the State of Emergency, or even just a few weeks ago. The Province of Ontario and cities, such as Ottawa, are initiating their Recovery plans. Parks and other open space areas have re-opened and as businesses and retail stores open and people return to their workplaces, we are seeing an increase in traffic volumes, including transit ridership. We expect this trend to continue over the next few months. Furthermore, the cost to implement temporary measures is quite prohibitive and any plan to temporarily reallocate space in a comprehensive manner could cost a few a million dollars to implement – just to the end of the year. Our focus is to spend our energies and dollars on permanent facilities that will enhance both the cycling and pedestrian networks in a permanent manner.

Therefore, a broad city-wide implementation of temporary measures will not be pursued. However, we will continue to implement some localized temporary measures, which are Councillor-initiated. These works are developed in conjunction with City staff and are funded through the Councillors’ temporary traffic calming budgets – a process that was approved by Council on May 13, 2020.

Thank you again for your interest in active transportation.