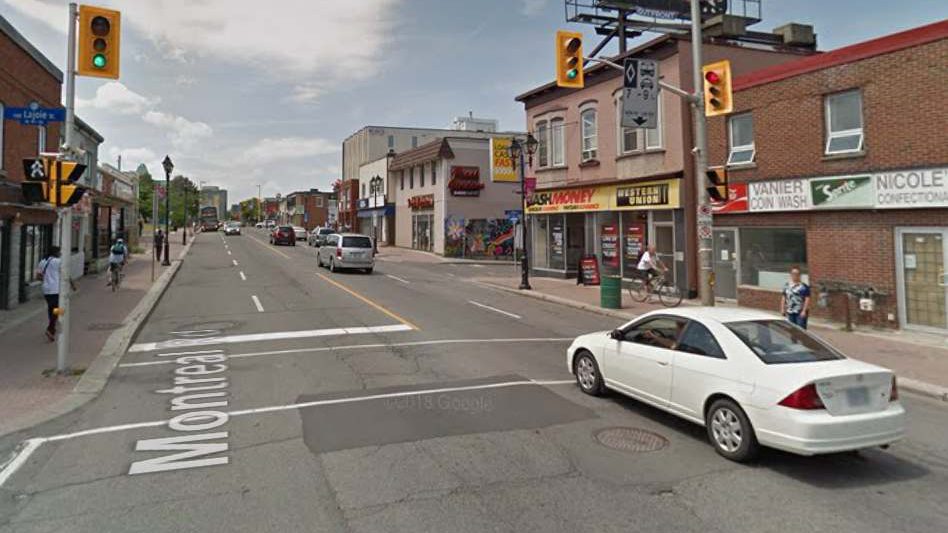 The City of Ottawa has mostly completed the design for the Montreal Road revitalization from Vanier Parkway to St Laurent Boulevard and will soon begin construction.

Preparatory work is planned to begin in May 2019, with main construction beginning in September 2019. As far as cycling is concerned, the main positives are the plan for a new grade-separated bidirectional cycle track along most of the corridor, as well as improved intersections for cyclists, including the Vanier Parkway intersection on the south side of Montreal Road.

One other big positive for the community is the burial of all overhead infrastructure over almost the entire corridor, a massive expenditure recently approved by council, which was needed to free up more right of way for pedestrians and cyclists.

The construction work will take much longer than initially planned, due to burial of Hydro lines and other factors. Construction is now forecast to last four years, with severe traffic restriction on Montreal Road, which will be reduced from four lanes to two lanes and eventually only one lane during construction. During construction, traffic will be diverted to McArthur Avenue.

Currently, no interim cycling accommodation measures are planned. The City assured us that they have no plans to impact the McArthur cycling facility, but they are already talking about adding a traffic lane eastward on McArthur Avenue near St Laurent Boulevard, and removing the cycling facility may become appealing.

Bike Ottawa will advocate for cycling accommodation measures during construction, for the protection of the McArthur Avenue cycling facility during the four-year detour, and for the City to consider improving the St Laurent Boulevard/McArthur Avenue intersection for cyclists as they add a second left-hand turning lane for traffic.