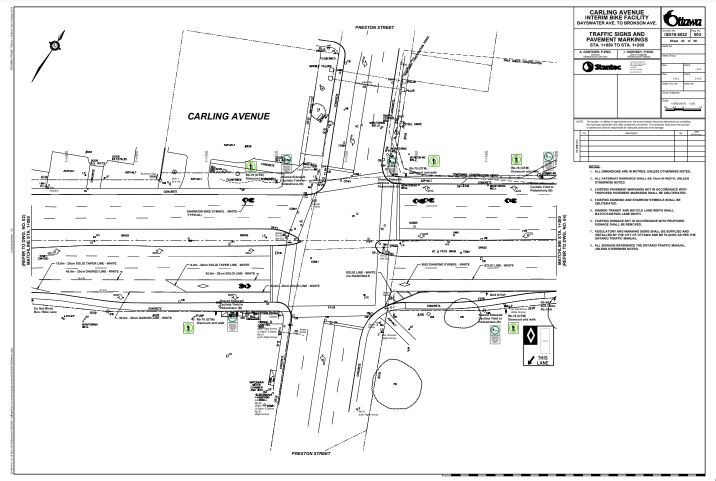 Bike Ottawa’s Advocacy Working Group (AWG) sent a letter to Stantec this week. We are concerned about the lack of safe cycling infrastructure in the design for temporary modifications on Carling Ave, west of Bronson.

The consultants suggest ‘walk your bike’ signs and a shared bus/bike lane indicated by sharrows. We think this falls very much short of the intention of our city to make it better for active transportation, including routes to the Trillium pathway and LRT station on Carling near Preston. Here are our concerns we shared with Stantec. We urge you to contact your city councillor, school board and community association and express concerns. Read our letter below:

We appreciate the opportunity to provide feedback about the interim cycling measures that areproposed within the limits of this project. We feel that some of the risks that remain from the present infrastructure can be better mitigated by improving cycling conditions on streets and paths that are beyond the scope of this project. For this reason, we are forwarding our comments to Councillor Shawn Menard (of Capital Ward), who may be able to support additional measures for cyclists who travel along or adjacent to Carling Avenue.

An important reminder: we can install whatever RB-70 (“walk your bike”) signs all we want, however cyclists will not use them if they do not make sense to them. Cyclists will ride across crosswalks even though it is illegal. Sharrows are tempting to install because they are cheap, but the paint quickly disappears, they have no legal status and they do not protect cyclists. They are not infrastructure. Just because we want cyclists to use poor infrastructure doesn’t mean that they will.

Building more infrastructure (or reinforcing it) normalizes that it is okay to build yet more of it. This perpetuates the idea that cyclists are scofflaws, when really we should be building facilities they *want* to use properly.

Carling is an LTS-4 facility. This warrants separated facilities according to Book 18 and Ottawa’s official plan. This is not what being proposed. We understand this is intended to be an interim measure, however 5 years is a very long time (when added to the approximately 10 years that separated infrastructure has been discussed along Carling). We feel it is appropriate to invest in better routes adjacent to Carling that provide a level of traffic stress that is lower than what can be accommodated in the proposed interim measures.

While we recognize the scope of the project extends only as far as Cambridge Street, we would like to see an improved connection to nearby communities, especially given the contraflow lane (1 block away from Cambridge) on Glebe Ave is now in place. The contraflow lane on Glebe Ave isn’t shown on the provided plans. We encourage you to update the base map so that all involved can be reminded of this potential connection. Is it fair to expect high school students to ride in a sharrow, and then walk their bike through the crosswalk to go the final block to school? This section is an important connection between the Glebe Neighbourhood and Carling, and an issue we would expect to be included within the scope of the project.

Another way to connect to the Glebe (and Lansdowne, and the Flora MacDonald Footbridge that will be opening this year) is through Commissioners Park. We must however keep in mind that Commissioners Park is not an option when the park is closed because of festivals (eg. Tulip Fest) or snow (not winter maintained along E-W pathway).

At very least, the small sidewalk between Glebe and the pedestrian crossing should be shared bike/ped. It may be out of scope of this project, but a direct cross ride on the North side between Glebe Ave and Carling should be considered.

The diagram shows a sharrow on Carling WB. However, this is a designated bus/bike lane. We believe the OTM shows not a sharrow but just the figure of a cyclist to show that this is not just a suggested facility. We would like to see the most up to date figures used.

Eastbound, there are no markings at all on the diagram between the centre lane on Carling to connect with Glebe Ave (which is in the Glebe neighbourhood cycling plan). Going up the hill (challenging for many, even in perfect conditions), cyclists are supposed to go from the bus/bike lane to the centre lane. This is a difficult manoeuvre. If there’s no room for any facility there, there should be a red/white single file sign there.

This is an important connection, moving cyclists from the shared bus lane to a much more calm side-street. Fixing this would be a big win. The diagram doesn’t show how cyclists are supposed to get from the eastbound bike/bus lane to Dow’s Lake Rd. A very simple solution would be to put in a curb cut on both the Carling and Dow’s Lake sides. Without it, cyclists have to ride the sidewalk to get to the connection. The way it is now, it can’t be plowed because of the curb on Dow’s Lake Rd. No cyclist will obey any dismount sign when crossing the sidewalk on the South side of Carling (no matter how much we want that). Nearby, there’s a designated tour bus lane on the South side by the park (even thought this is a bus/bike lane). During festivals, the park is unrideable and this shared bike/bus lane is jammed with tour buses. Provide some detour or signage to accommodate cyclists.

This is an important crossing for cyclists to get between the OTrain path and Commissioner’s Park (event and recreation site). The path through the park is very important as it gets cyclists off of Carling (an LTS-4 facility) and onto an LTS-1 facility, and the hill up to the Glebe is less steep going along Madawaska.

Going southbound from Preston onto Carling eastbound is important as it is a way to get from the Otrain path to the park or Carling (via Adeline or Pamilla). On the left turn lane, we encourage the addition of red/white single file signs so that impatient drivers do not try to squeeze cyclists out. By the HTA, vehicles are supposed to enter the left turn lane of the receiving road. This is not feasible for cyclists, since they want to get to the park, or need to be on the right lane. If we’re going to build infrastructure that makes it impossible for cyclists to follow the rules of the road, let’s acknowledge that that is what we’re building. Straight eastbound is important as it’s a way to get from the south side of OTrain path to the park or up the hill. Get rid of the right turn lane at this intersection, drivers aren’t looking anyway. This is a rare manoeuvre for cars, and the bus that stops here goes straight rather than turning as well.

Westbound on Carling to Preston N is an important connection to get from the new Carling work to the Otrain via Preston and Adeline or Pamilla (which are LTS-3 or LTS-2 facilities). The northbound right lane of Preston has been closed because of construction for about three years. Traffic has flown well over this period, there has not been traffic mayhem because of it. We request that it be kept closed, that you widen the sidewalk and put in the stub of a bike lane. Extend the bike/bus lane it west of Preston along Carling. There are three car lanes there, and if sidewalk riding could be permitted, this could be provide an exit point (slip lane for cyclists who want to get up onto the sidewalk) immediately after the bus stop that is on the north side of the Otrain bridge. Provide a red and white “single file” sign here for on-street riders. Some of us have been squeezed here by buses before, which is unforgiving, especially with the height of the curb. Given this is an important connection to Sherwood (a good connecting route to places beyond).

5. Carling and Champagne, through Loretta to Sherwood

One of the authors who helped compile these comments had a close call at the corner of Carling WB at Champagne because of heavy traffic turning right onto Champagne to get to the hospital staff parking lot (the car was confirmed to be parked in there later that day). During shift change drivers don’t have patience to drive safely around (or to yield to) people who are riding on the road. Among the safer options on the North side (short of providing a separate, protected cycling lane) is, for the interim, to allow riders to hop up onto the sidewalk immediate after the us stop (over Trillium line), by building an exit slip lane and posting “shared sidewalk” signs through to Sherwood.

A second option for westbound cycling traffic is to encourage cyclists to ride across Carling at the Trillium path, and then head west on the sidewalk alongside Queen Juliana Park, to the intersection with Sherwood. Signage would be needed at the Trillium path crossing so that cyclists understand this is a comfortable route. To encourage more comfortable cycling through Sherwood, small changes can be made to the intersection, such as having a have a proper cycling signal and crossride for cyclists riding northbound on Sherwood, rather than riding through the crosswalk at the time of the walk signal. An infrared detector could be installed so that cyclists wouldn’t have to use the beg button that is not well-aligned if you wish to enter the sidewalk separately from pedestrians. This setup would last long beyond the interim 5-year plan, so this equipment need not be viewed as a costly temporary measure. An advance green for pedestrians and cyclists would be safer here. Vehicles from Carling headed NB on Sherwood often come around the corner quickly. Consider prohibiting right turns on red at this location.

Getting the NCC to plow the E-W path that runs between Madawaska and the Preston/Carling intersection would get cyclists off of the eastern part of Carling and going through the park. It isn’t City of Ottawa property, but the city does snow clear NCC property in other locations. Our other recommendation regarding signage: we would like to see better wayfinding installed to help direct people on bikes between Commissioner’s Park, the Otrain path, Lansdowne, the Glebe and Little Italy. Signs are cheap. The infrastructure (both interim and more permanent) will see better use if people feel confident they can arrive at their destination, despite not being able to see it.

We realize this is a lengthy set of recommendations, however we feel many of them are long overdue. If you require clarification on any of the above described recommendations, please do not hesitate to contact us.

Thank you again for allowing us to provide feedback concerning this project.