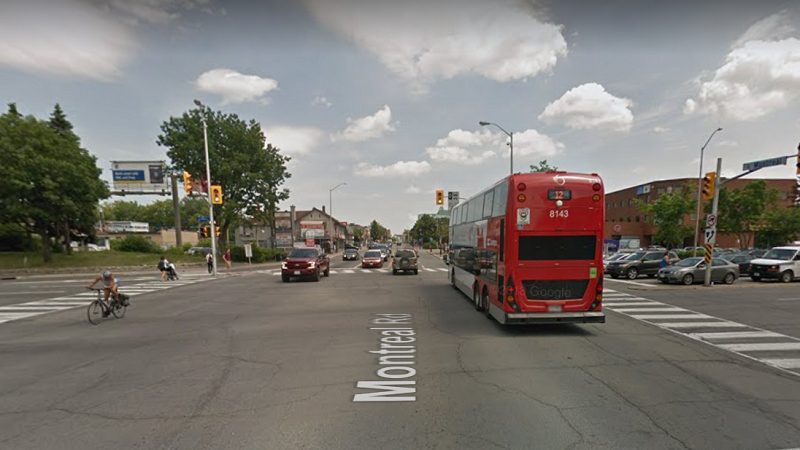 Cycle along Montreal Road in Vanier, with its four lanes of traffic and lack of bike infrastructure, and you can understand how this route is categorized as the highest stress level on Bike Ottawa’s cycling stress map. As the city plans to reconstruct part of Montreal Road, a major east-west link for drivers and cyclists, Bike Ottawa and the Vanier Community Association are advocating for grade-separated cycle tracks along Montreal Road from St. Laurent Boulevard to North River Road.

The city confirmed that the cycle tracks will be physically separated from the road – as opposed to a bike lane, which is generally understood to have no physical barrier between bikes and car traffic. These improvements will make cycling this portion of the route safer and more pleasant for both experienced and inexperienced cyclists. Construction for the project is planned to begin in spring 2019, to be completed in 2021.

However, the city’s plan falls short for the portion of Montreal Road between St. Laurent Boulevard and North River Road. For this portion of the road, the city is recommending diverting the cycle tracks to a side street, Mark Avenue, and maintaining four lanes of traffic along Montreal Road. As a result, cyclists will be forced to either make a series of turns and crossings, and travel through an isolated alleyway to access the side street, or risk merging with car traffic to continue along their path.

Bike Ottawa, along with the Vanier Community Association, are advocating for the city to implement cycle tracks for the full length of the project. Some members of the Vanier Community Association are concerned that forcing cyclists to divert to the side street puts them at risk of crime in an alleyway known for drug activity, sex work, and loitering. Women, in particular, some have argued, will feel unsafe travelling down this alternate route.

A crucial east-west link for cycling

Furthermore, Bike Ottawa believes that this portion of Montreal Road is a crucial connectivity node for cycling. The city has identified Montreal Road as an east-west cycling spine in their long-term cycling plan. Improvements would accommodate a high volume of cyclists of all comfort levels, align with the city’s infrastructure master plan, provide a crucial east-west link that is currently missing from Ottawa’s eastern cycling network, and contribute to the city’s overall cycling strategy.

Despite the importance of this route, the city says that there is no good option for incorporating cycle tracks between Vanier Parkway and North River Road. It says it considered reducing car traffic to two westbound lanes and one eastbound lane, or vice versa, to make room for cycle tracks, but that these two options would either back up bus traffic by 60-110 per cent, depending on the time of day, or impact deliveries to local businesses, respectively.

However, according to the Vanier Community Association, only a few businesses indicated that cycle tracks would impact deliveries to their businesses. Furthermore, the Vanier BIA supports cycle tracks along the full length of the project. The Vanier Community Association, in a recommendation echoed by Bike Ottawa, is pressing the city to consider alternative options for deliveries, including in driveways and in the parking lot along the north side.

The city has suggested it will hold another public consultation in January 2019, where it will unveil its detailed design plan and final recommendation. It also still needs to work out the details for some intersections, including at St. Laurent Boulevard. Bike Ottawa has attended previous consultations and will continue to advocate in support of the Vanier Community Association and the interests of cyclists. To date, we have sent the city two letters outlining our concerns, urging the city to work with the Vanier Community Association to find solutions.

The City of Ottawa plans to provide a better connection at the St. Laurent/Montreal Road intersection, on the north side. It also plans to eliminate the treacherous bottleneck at the Montreal Road/Vanier Parkway intersection on the south side going East, pending acquisition of right of way by the city.

However, the city is steadfast on leaving Montreal Road as a four-lane road (two lanes north, two lanes south) between the Cummings Bridge and Vanier Parkway. The city found it impossible to narrow the road to three vehicular lanes. On that section, the city decided to eliminate sharrows to “force” cyclists on the detour that they are building on Mark Avenue.

A difficult merge remains at the St Laurent/Montreal Road intersection on the south side. The bike lane ends abruptly, forcing cyclists into the traffic or to disembark and continue on the curb walking their bikes. This situation is temporary as right of way is being secured for when the property at that corner will be redeveloped.