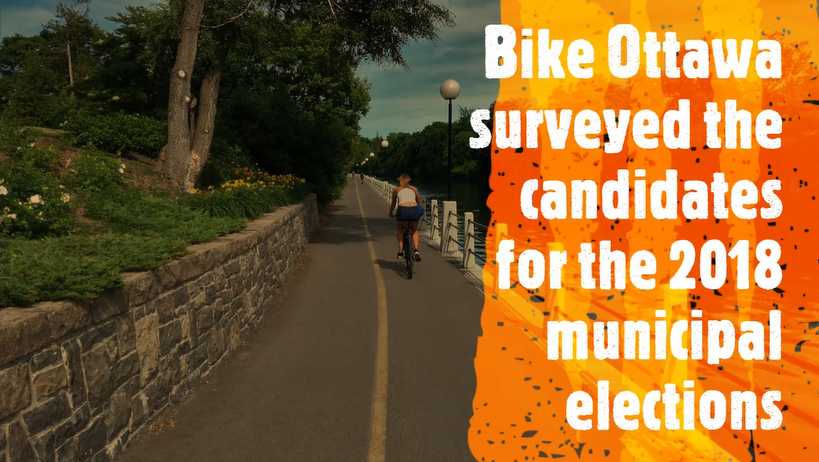 October 22 is election day for city council in Ottawa. We asked all the candidates running for councillor or mayor to answer a short survey to understand where they stand on cycling and road safety to help you make an informed decision.

This summer Bike Ottawa’s advocacy group designed a survey to hear from the candidates, but also to educate the potential new councillors of Bike Ottawa’s existence. We also wanted to share some of the city’s cycling achievements we are proud of as well as the issues we face as residents. It was also a bit of an awareness campaign becasue not every candidate is as plugged in as we as cyclists are.

The results are very encouraging: 74 candidates answered our survey, higher than we expected. The response was very positive.

“In Osgoode Ward, most people are exhausted from working and dont need much extra walking and cycling activities.”

We purposely asked many yes/no questions, so that they would be easy to answer. We wanted to save candidates’ time and we wanted to avoid middle of the road answers such as “it depend on the budget”, We need to be careful”, “We all have to get along on the road” and other plain vanilla responses. Our opinion is that you believe in something or you don’t. We are aware that it doesn’t allow for more balanced answers, (point taken, councillor Blais) but it does allow us to understand where candidates are standing.

How to read the survey?

We are providing two sets of results:

1. We tabulated the results and show the totals to give you an idea of what the general thoughts of the candidates are. In the backend, Google allows us to pull off individual completed forms, but unfortunately, not at the front end. You can see the total results in pie charts in Google Forms here.

2. It is too much to bring this all online manually (over 1400 entries), so we give you the raw data in a spreadsheet. This allows you to sort. The default is set to ward numbers, so you can highlight your ward candidates and scroll through it, cut and paste them in a new worksheet, reorder them etc. We have frozen the top line with the questions. Feel free to use the info but we appreciate you mention us as a source. Here is the spreadsheet with the individual answers.

Update: On October 5 we updated the spreadsheet with one answer by Erica Dath, who contacted us to say she accidentally answered ‘no’ instead of ‘yes’ to an answer about complete streets.

3. NEW: Bike Ottawa member reseached what candidates pomised in 2014 and delivered in 2018. Find the results here in this 2014 promises and 2018 deliverables in 2018, sorted by councillor.

A note of caution

While we had a high response rate, there is a likelihood that the survey attracted more interest from candidates who are suppportive of cycling. About half of the current councillors answered the survey, the other half didn’t. It doesn’t mean that those who didn’t complete the survey are against cycling: they may just not want to be on the record (or are disorganised, who knows).

“As our city continues to grow, Smart Development that considers pedestrians and cyclists certainly needs to be considered in every major infrastructure project.”

The results are very encouraging. Nearly every answer garnered very positive results for us: some answers received over 90% support. We would like to conclude from the survey that cycling is becoming more and more mainstream. In all likelihood the worst cycling advocacy struggles are over. It might also be an indication that a new generation of councillors is becoming more progressive than we sometimes realise. We recommend to ignore the trolling on Twitter and by some of the media outlets. This poll shows that there is a wide understanding that cycling needs to be improved and that councillor candidates and mayoral candidates are willing to support it.

But don’t underestimate the demand for more space for cars. Councillors hear a lot of complaints about mobility: public transportation is a big ticket complaint as well as road conditions and traffic delays. As we all know, more and wider roads aren’t going to solve any problems in the long term, so hopefully councillors stand their ground and are going to look into smart mobility options rather than just start to widen roads, attracting more cars, creating more congestion.

“Driving is a privilege, it is not a right. I don’t want to see families lose loved ones as a result of irresponsible driving. I will strongly advocate towards “Vision Zero” in full, the longer we wait the more innocent people lose their lives. Complete roads are essential, with all users in mind & I look forward to getting real results now, I will not accept delays.”

Staying vigilant and working together

We will have to remain vigilant. As a city we have to focus on mobility options. While the trolls (some newspapers included) try to steer the discussions towards a car vs bike war; the reality is a lot more nuanced. Many drivers walk, countless cyclists have a car in the driveway, so don’t walk into that car vs bike trap. spent your time to build up a working relationship with your councillor instead.

There is a lot of advocacy work to do in the field of design on paper by the planners vs. the reality on the street. We have to remain vigilant on detours, unneccesary “walk you bike” signs, cars and trucks stopped and parked in bike lanes and on sidewalks, safe routes to LRT stations, safe, proper and sufficient bicycle parking, lit pathways and illiminating missing links in the network to name but a few of the issues that haven’t been solved or need major improvements.

“I believe that our ward needs to improve the quality of its bike path. Pot holes and degraded paths discourage cycling, which we want to encourage as a healthy method of transportation.”

Enjoy picking through the results and may the best candidate (for active transportation) win. Unlike newspapers we don’t endorse candidates but we do try to provide you with relevant information.