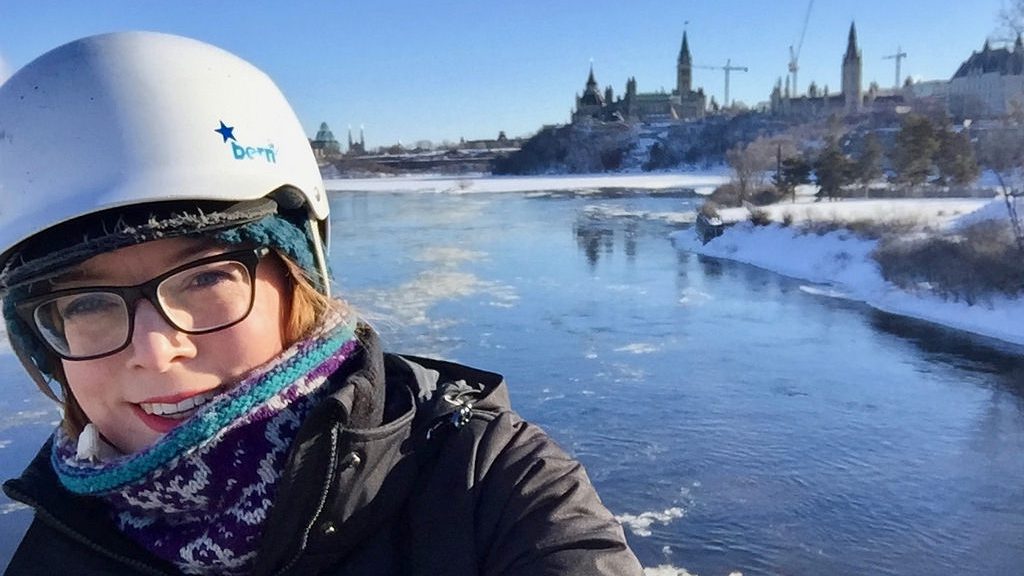 In this first installment of our new series of winter cycling stories, Cassandra Fulgham tells us how she went from being a complete stranger to snowy winters, to cycling nearly every day, all year around.

Enjoy, and if it inspires you to tell your own Ottawa winter cycling story, we’d love to hear it: find out how.

Why did you start riding through the winter?

I moved to Ottawa from Vancouver in 2008 and had never lived in a place with snow before, so in my first two years I put my bike away for the winter. I didn’t know how to DRESS for snow, let alone imagine riding a bike in it. I rode year round in Vancouver and had ridden on a couple of the (once) rare icy days there, but that was basically it.

In my second winter in Ottawa, there was a melt one day in February and it was beautiful and mild out, so I just had to pull out my bike to go for a ride. I still remember the feeling of freedom as I pedalled down Wellington West after having felt cooped up and trapped by the snow. It was unparalleled glee.

It occurred to me on that day that maybe I didn’t have to put my bike away for the winter after all, but I also knew that I probably couldn’t ride my regular season bike (at that time a road bike with skinny slicks tires on it).

What kind of bike do you ride, and why did you choose it?

As luck would have it, during the next couple of months, a friend of mine traded me an old mountain bike she had lying around in her storage locker for a week’s worth of cat sitting. That was the motivation I needed and the next winter I started riding to work occasionally, choosing to walk or bus when I didn’t feel comfortable with the conditions. However, most days were still very clear on the roads, so riding to and from work and to run errands around the neighbourhood wasn’t that much different than during the non-winter months.

The next winter, a colleague was selling the bike she had had customized for winter riding for a really good price, so I bought that from her and started to ride it instead. The slightly nicer bike (honestly, the first one was exceedingly terrible) made the ride a lot more enjoyable and so I started to ride the vast majority of the days in the winter, really only opting not to ride on the day a new dump of snow arrived. I also found people to follow on Twitter who also rode through the winter, and their knowledge and sharing of experiences really motivated me to continue riding and to test the boundaries of what I was comfortable riding in.

What motivates you to continue cycling through the winter?

Eventually, that vast majority eventually turned into every day and it has now been five years that I’ve ridden to and from work pretty much every day, as well as run errands, visited friends and even gone cross-country skiing by bike in the winter. Seeing more people out on the roads each year is great and the city’s winter-maintained network has really increased the distance one can safely go on separated infrastructure, especially the Rideau Canal Pathway and the East-West Bikeway. Plus, on many days it’s breathtakingly beautiful out, especially the days with the lightly falling snow, muffling the sounds of the city so you feel like you’re in a winter wonderland.

Do you have any tips for those thinking about trying winter cycling for the first time?

I encourage others to give it a try. Try it out on a clear day – you’ll soon notice there are lots! – with any bike you have available and wear more or less (maybe a little less!) than you would to walk around in the winter.

Follow other winter cyclists on Twitter; pretty much all of us (there are a lot) would be very happy to give you tips on winter riding and we tend to share information about what conditions you can expect on popular routes – don’t be surprised if you find us wistfully discussing our winter rides in the middle of summer! It’s that awesome.

Read more about biking through winter, incuding other installments in our winter cycling series

Tell your own winter cycling story: Find the information you need to submit here.