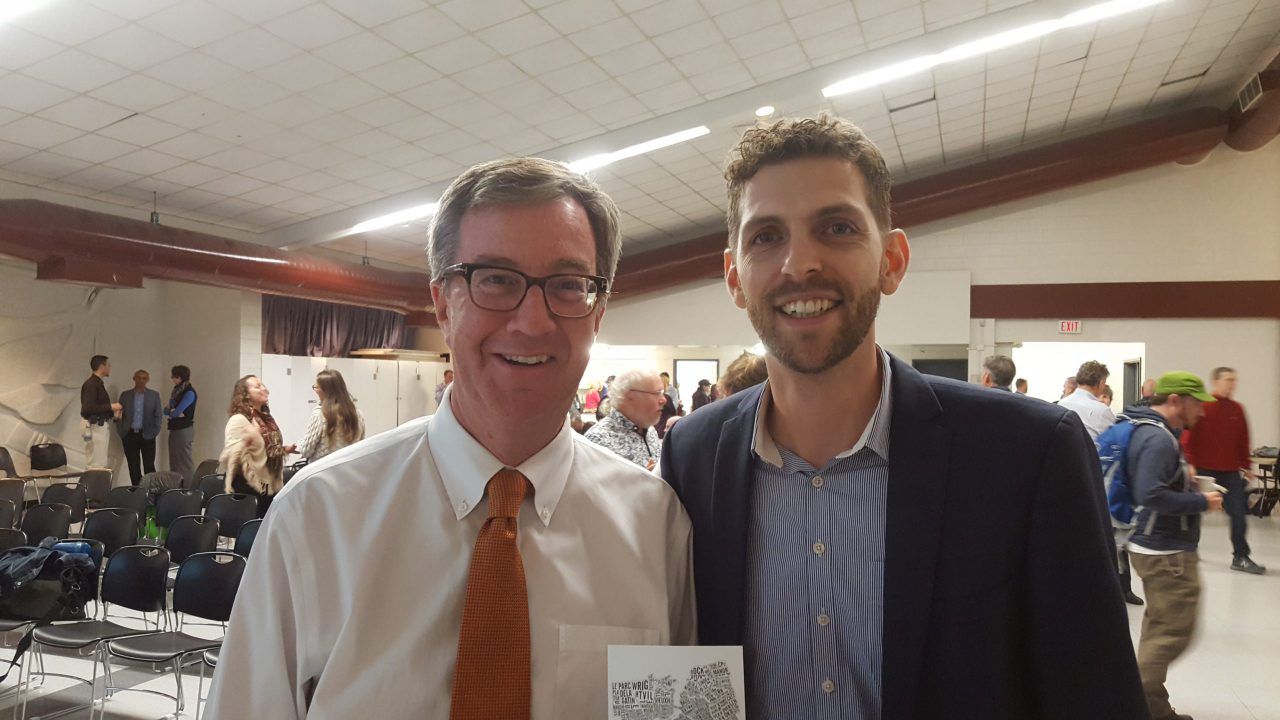 What a fantastic turnout at our 2016 AGM! Not only did we have the largest ever number of members and guests in attendance (nearly 150), but we also had more members of city council join us than ever before, along with Mayor Jim Watson.

This record attendance mirrors what we’ve been seeing in our membership, which has also reached record numbers. But it’s not just us: we’ve seen another substantial increase in the counts on Ottawa’s bike counters. This is all indicative of the great momentum we’re seeing to improve safe cycling in Ottawa. Good data from numbers like these is also key to designing for the future, and for measuring what has already been accomplished. Therefore, “data” was a fitting theme for this year’s AGM.

Federal NDP MP for Windsor-Tecumseh Cheryl Hardcastle opened the AGM with words on a proposed National Cycling Strategy for Canada, which her colleague Gord Johns is introducing to Parliament as a Private Members’ Bill.

We also heard from River Ward Councillor Riley Brockington, who spoke about his recent initiative to request support  for using photo radar on Ottawa’s streets, as well as the importance of cycling issues such as connectivity between multi-use pathways and other safe cycling routes in his ward. Councillor Catherine McKenney (Somerset ward) spoke with passion about Vision Zero, the philosophy that the loss of a life is never an acceptable price to pay for transportation. We can and must do better. Along with Councillors Brockington and McKenney, we were pleased to have the following Councillors from wards across the city join us: David Chernushenko (Capital Ward), Mathieu Fleury (Rideau-Vanier), Jeff Leiper (Kitchissipi), and Michael Qaqish (Gloucester South Nepean). Local MP and Minister of Environment and Climate Change, Catherine McKenna, sent staff representatives as she was not available, and MPP Yasir Naqvi sent his regrets from Queens Park. We greatly appreciate the tremendous support that this representation demonstrates for our work.

By way of introduction to the event’s data theme, outgoing Citizens for Safe Cycling Vice President Alex deVries used some Ottawa bike data to do some myth busting on the question of whether cycling is getting more dangerous in downtown Ottawa. Check out his slides to learn the answer.

Next, Fraser McLaughlin of EcoCounter gave a kenote presentation on using data from GPS and bike counters to identify cyclist desire lines in Montreal. We heard how EcoCounter has collected data from permanent bike counters and mobile GPS apps that track the rides of self-selected users to identify routes that people are frequently riding in spite of a lack of bike facilities. This data can be used to make the case for prioritizing locations for new bike infrastructure on routes where people are already demonstrating they want to ride.

Finally, before moving to the official business portion of the meeting, we heard from our Advocacy Working Group Chair, Paul Clarke, on the many projects our volunteers have been following and providing inputs on across the city. In light of the spread of these projects and engagement of members from different areas around the City, the AWG is transitioning to a new model that will aim to encourage activity in the many different neighbourhoods and wards across Ottawa where we are seeing developments that affect those who bike. Stay tuned for updates or email advocacy@bikeottawa.ca to learn how you can get involved.

After a break for some socializing, members reconvened to address the official business, including a review of the minutes from last year’s AGM, the Treasurer’s report, appointment of the auditor, and election of the board for 2017. We thanked Felicity Borgal for her work on the board, as she’ll now be heading up a new working group to lead all of our events. Otherwise, the board remains largely the same, with a few important updates: Longtime AWG participant Peter Fawcett has joined the board in Felicity’s place. A few positions were also shuffled, with Alex deVries leaving the role of Vice President to be a board member at large, and Heather Shearer giving up her position as Secretary to be your new VP. Hayley Price-Kelly, who has been behind most of our newsletter content in recent years, is the new Secretary. The rest of the board were either not up for election this year, or were elected in their current roles: Don McIntosh (re-elected as Treasurer), Brian McPherson, Simone Rivers, Cassandra Fulgham, and Gareth Davies (President).

Thanks to all those who have shown their support for BikeOttawa this year, whether by joining as members, coming out to events, or volunteering to help with any of our many activities. We also greatly appreciate the support of our partners, including Ottawa Centre EcoDistrict, EnviroCentre and Safer Roads Ottawa, who set up booths at the AGM. Thanks also to the Ministry of Coffee, which generously supplied coffee and tea for this AGM. The Board looks forward to building on the clear momentum we heard about at the AGM in the coming year!