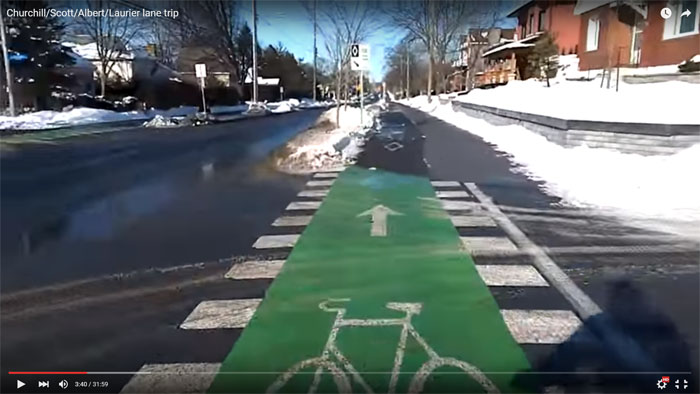 This message was sent by Citizens for Safe Cycling to Keith Egli, Chair of Transportation Committee for the City of Ottawa.

Ottawa has had several snowfalls since late December, and Citizens for Safe Cycling’s Advocacy Working Group has been canvassing user opinions on the state of maintenance on the expanded winter cycling network that is being supported this winter.

In general, the work has been pretty good, and we would like to pass along our appreciation to those involved for the work done to date. Sections that have received particular praise included Churchill’s cycle tracks, the O-Train pathway, and most of the Scott-Albert MUP. One of our members said the old train bridge near Hurdman over the Rideau River and its connector up to River Road had been cleared better than ever. The new Albert-Laurier connector is also being cleared quite thoroughly.

The foremost spots not being cleared enough for cycling are the Rideau Canal pathways, portions of which have not been cleaned to the pavement for a long period following storms. Also of concern was snow being knocked into the Laurier bike segregated lanes during other clearing operations. The pathway at the west end of Scott Street was not being cleared wide enough for bikes to pass pedestrians easily. (See Councillor Leiper’s on-bike video of his ride on January 21, viewable on YouTube.) For future planning, a lack of east-end routes in the winter network came up in discussions.

There have been several instances that we are aware of where staff clearing the snow around Pay-and-Display machines have pushed it onto adjacent pathway or cycle facilities. This practice needs to be curtailed, please.

We will continue to monitor the situation and report again during this season. In the meantime, we hope you can forward these kudos and complaints to the appropriate persons.