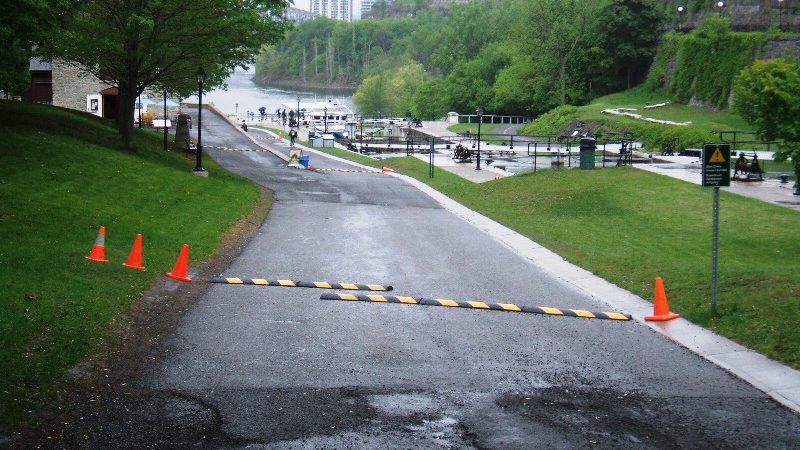 Where the NCC’s Ottawa River Pathway behind Parliament reaches the Rideau Canal, the pathway comes under jurisdiction of Parks Canada.

Many of you will know that it is a pretty steep section to climb from the river to Wellington Street and, naturally, the opposite direction can involve building up too much speed unless you apply the brakes a lot.  Since the area is very busy with foot traffic from spring until fall, collisions and near-misses between cyclists and pedestrians were happening.

Due to public complaints that some cyclists were not descending in a safe manner, Parks Canada implemented a temporary solution in August 2014 to address speeding.  Several sets of removable rubber speed bumps were installed at intervals on the pathway. See photo 1 above.

Our Advocacy Working Group reviewed this solution during the fall of 2014.  The general feeling was that the bumps, as implemented, were too extreme, and that no attempt had been made to separate cyclists from others.  We created a proposal that was sent to Parks Canada this spring, which would see cyclists channelled away from the area nearest to the locks themselves.  In this way, downhill cyclists would not be forced to make an almost complete stop at multiple locations to surmount speed bumps or weave between their gaps.  Our suggestions have yet to be realized.

Those speed bumps had been removed for the winter and were redeployed in the spring before our ideas were submitted.  Then, during the summer, a more permanent set-up was installed.  The former locations of the bumps were excavated and rough-hewn cobblestones were installed.  The staggered arrangement remains, so there is a smooth route through, but the cyclist has to make very sharp turns to follow it.  See photo 2.

What do cyclists think of these new measures?  E-mail advocacy@bikeottawa.ca to let us know.