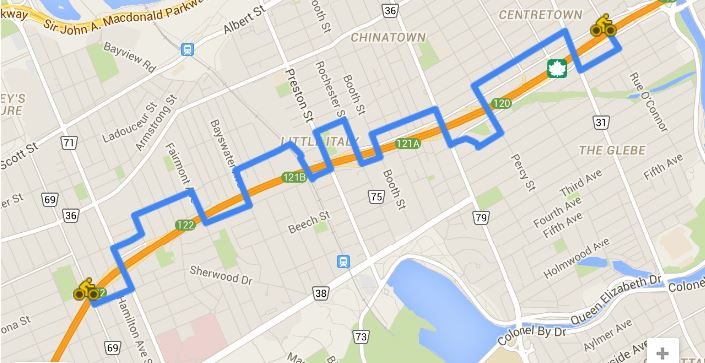 The Ministry of Transportation of Ontario (MTO) plans to replace eleven Queensway bridges crossing over mid-town Ottawa roads from Holland Avenue to O’Connor and has presented recommended preliminary designs for community feedback.

CfSC is urging the MTO and the City of Ottawa to consider how this reconstruction could be an opportunity to make underpasses safer for cyclists and pedestrians.

Image courtesy of Brian Smith, who went on a cycling recon mission to check out all of the underpasses that will be a part of this MTO project. Read his findings and see his photos on his blog

Widths of the re-vamped bridges will impact current and future options for improving cycling and pedestrian infrastructure in these pinch points. More reflection and planning is needed on whether and how cyclists, pedestrians, and traffic could all be accommodated before implementing recommendations to maintain current widths and even narrow some of the bridges. As they currently stand, many of these bridges such as Holland, Parkdale, and Bronson are unsafe areas for cyclists and this is an opportunity for improvement.

Recommended narrowing of the O-Train bridge is a focal point for cyclists: while the proposal leaves room for the existing multi-use pathway, it would make it impossible to build a second path on the west side of the tracks. A pathway on the western side of the tracks has been suggested in nearby community plans. CfSC will bring this disconnect between city planning and MTO recommendations to the the consultants’ and the city’s attention at this early stage, and will continue to monitor the mid-town Queensway bridge project.

The MTO is currently accepting feedback from all community members until March 13th. Find out more about the project and submit your feedback on the project website.