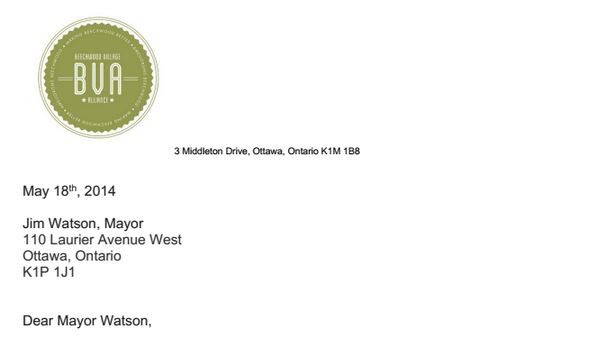 The Beechwood Village Alliance wrote to the mayor in favour of a bike lane on St. Patrick Street.

I recently attended a meeting at City Hall regarding the planed re-surfacing of St. Patrick St. on behalf of the Beechwood Village Alliance along with the Vanier Community Association, Quartier Vanier BIA, city staff and Councillor Fleury.

The community groups asked for the meeting when we learned – to our surprise – that the project did not envision a designated bike lane between Cobourg and King Edward.

St. Patrick Street is a key means for people living close to Beechwood to travel to the Market, Lowertown and points further west, including Gatineau, and vice-versa. Fortunately, as we noted to the project manager at the meeting, there is sufficient space on the existing concrete pad in each direction for two vehicular lanes of 3.25 m as well as a bike lane 1.15 m from the curb. Creating a bike lane would neither affect the currently planned vehicular lane width on St. Patrick nor have any budgetary implication.

The only reason given by city staff for the fact that a bike lane was not included in the plans was that the width of a potential bike lane – 1.15 metres or nearly 4 feet for each direction – was not up to standard. We pointed out that there were numerous bike lanes of that width or less throughout the City – Cummings Bridge, Montreal Road, Ogilvie Road, to name but three in the area – and that the research was clear that cyclists are safer when cycling in a designated lane versus lanes that simply have sharrows, as are planned in this case. Furthermore, cyclists feel safer in bike lanes. Many would-be cyclists in our community hesitate to bike on St. Patrick because of the lack of infrastructure. Despite our advocacy and the support of Councillor Fleury, the project manager was unmoved.

I am writing to ask for your support in ensuring that cycling lanes are included in the re-surfacing plan.

If the 1.15 m width is deemed insufficient, the vehicular lanes could of course be narrowed to 3 metres in width, to provide a wider 1.65 m bike lane. 3 metre wide vehicular lanes are not unprecedented in a 50 km/h zone in Ottawa and would have the added benefit of helping to slow down the traffic through a stretch of road on which speeding is regular and poses a potential danger to cyclists.

It would be a missed opportunity indeed if we failed to establish a lane at this juncture. With traffic backed up on St.Patrick during rush hour, and the population growing in the Beechwood corridor (as well as plans for the re-development of the former CFB Rockcliffe), we have an opportune moment to make it easier and safer for residents to travel along this route, and increase the cycling modal share. Moreover, given that the Master Transportation Plan and other relevant city policy documents extol the virtues of active transportation, a bike lane along St. Patrick offers a great opportunity to put words into action.
We were told at the meeting that St.Patrick St. will be re-constructed in a 5-10 year window with better and wider cycling infrastructure. That sounds promising. But it is not a good reason to do nothing in the meantime, or as they say, to let the perfect be the enemy of the good.

We look forward to hearing back from you on this important issue for our community.