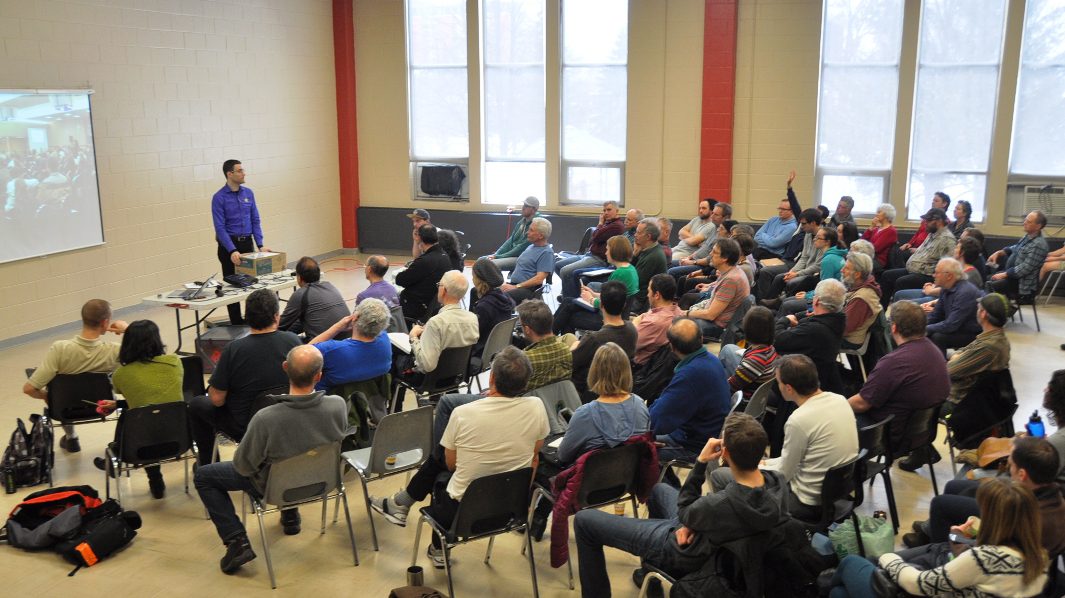 A spring bike event during a winter storm? Only in Ottawa.

Our 3rd annual Spring.Bike.Otawa event had an interesting start. 63 people signed up in advance, but by the time the doors opened at McNabb, there was about 15 cm of snow covering Ottawa. People trickled in and to make sure it would’t look like the room was half empty, we only put 50 chairs out.

But were we ever wrong, not only did we surpass 63, we ended up with about 75 people in the room (give or take a baby or two). Citizens for Safe Cycling is very much focussed on the community. We want everyone to be able to attend, so entrance is free. Cycling is mostly a municipal affair, so we want to hear neighbourhood voices, the City, the NCC and advocacy groups and less of the standard fare from generic speakers. There was (not enough) Bridgehead coffee (a local coffee chain with Fair Trade Coffee) picked up by Ruth and we made sure we had nut free cookies.

Over the years, we have heard about neighbourhood initiatives, city plans, safety campaigns, touring organisations, bike share programs and university initiatives to name but a few. This year, because it is our 30th anniversary, we allocated a bit more time to some of our own initiatives. Here are very brief synopsis of the presentations. Contact us if you want to talk more in debt to the speakers.

This year, Hans left the MC to Isabel Jenish, who turned out to be very comfortable in front of a larger crowd. With humour and well prepared bios, she guided speakers and the audience smoothly through three hours of bike talks.

Board member Kathleen Walker gave feedback about our participation in the winter bike conference in Winnipeg, where she talked about cycling in winter with children. She shared some of her impressions from the conference and how to apply them in Ottawa. She told us about how different cities apply different ways of snow clearing, about maintaining winter networks etc. One of the takeaways was to broaden the discussion to outdoor winter activities: bring running, skating, snow shoeing, sledding, skiing and walking under the winter activities umbrella. It turns out from an unscientific poll by the winter cycling conference that 80% of the people in Oulu, Finland think the city does enough for winter cycling, 50% thinks that in Montreal and 30% in Ottawa.

Sarah briefed on Vanier, a neighbourhood that was historically blue collar French apparently. It is going through a revival, because other properties close to downtown becoming more and more expensive. She explained the difficult situation with the several street grid patterns, the initiatives to improve the cycling situation, construction of the Donald Street Bridge that should be started soon. Sarah explained the advocacy activities in Vanier: maps, winter path maintenance, Montreal Road Cycling audit, the East West bike corridor and the Ottawa Cycling Plan and asked for attention for the Maple Sugar Festival Bike Ride on April 5 to a real sugar bush, inside Vanier.

Former CfSC board member and advocacy working group coordinator Paul Clarke explained a number of advocacy issues we have been working on: improvement of yellow dots and waiting times (if you stop on the three yellow dots, you will trigger a light, but it sometimes takes so long that you wonder if they work). The working group conveys the interests of local cyclists to governmental agencies at locl provincial and federal level and area businesses. He explained how the group worked on attention for the Chaudiere crossing, the Greenbelt P-gates, improvements on the Rockcliffe Parkway path, suggestions to open the Prince of Wales train bridge earlier, Queen Street renewal and cross rides. He asked for more people to get involved at local and ward level and people who go to public consultation meetings (like @modalmom, @muddybike and others do once in a while for example).

If you want to be an effective cycling advocate, be it for more bike lanes or more education in the schools, it is important to understand how budgets come together. You just don’t want to waste your time advocating for a bike facilities that are just not on the budget for the next seven years. As you are a volunteer, in all likelihood, you are a busy person, so spend some time understanding the budget processes. Making noise in December is just six months too late already. Tax Supported Budget and Rate Supported Budget Charles explained how City budgets work and how you have to read them. He explained the difference between the capital budget (infrastructure, facilities; these last for many years) and the operational budget (staffing, consultations, enforcement, these last for one year). Already in the summer council approves the totals, in fall the draft budgets are released and consultations are organised. In November/December the budgets are approved.

The provincial driver fees cover the MTO admin expenses, gas transfer taxes are used for public transit, not for cycling and walking. Property taxes are the largest income. The Tax Supported Budget is nearly $3 bln, the Rate Supported Budget (from fees on your water bill for example) is ‘only’ about 600 mln. It is important to understand that major road improvements are mostly paid or by the Rate Supported Budget of $600 mln. These improvements take place because the infrastructure underground needs to be replaced.

The tax supported budget is broader. Libraries, Emergency services, Parks, Forestry, Police, Housing and solid waste services all come from the tax supported budget. Capital Expenditures and Operational Expenditures Of the Capital Expenditures, 2/3 of the budget goes to the Transportation Budget. Another 10% goes to the Transit (OC Transpo) budget. Charles pointed out that there is no ‘cycling and walking’ chapter in the budget, you have to look for it by basically searching for keywords like cycling, walking, pedestrians, side walk, cyclists etc. (Fortunately, Adobe invented CNTR-F). Part of it might be under a new bridge to be built, another part might me under maintenance and yet another part might be under education. Yearly battle for educational budgets Charles gave a few examples of current changes in the city bureaucracy: in the past, councillors would cut cycling education budgets and every year, CfSC had to work to get it back in eventually draining the energy of the volunteers.

The previous Ottawa Cycling Plan took three years to be approved. Infrastructure was in the $10k to $100k range. One employee (Robin) was assigned to cycling, and he couldn’t keep up. Bike Group moved to Planning and Growth Department Now things look much better: The Corktown Bridge is a resounding success, there is a new Ottawa Bicycle Plan (2013), there are at least a dozen bike counters and –very important- the cycling group (now at least 4-5 people if not more plus engineers who are assigned to bike projects) moved to the Planning and Growth Department.

Obviously all the information is in the report. Schuyler (with Baby Nico) and her husband Andrew presented the report in Prezi. They and a team of volunteers started in November with the first discussions. We have found the rating system a bit too wordy so we brought that down to a much easier to read table. Months of collecting data, checking facts, editing and proof reading went in to it but they can be proud of the result. The report is not only a snap shot of the bicycling situation in Ottawa, it is also a 28 page business card of Ottawa’s utilitarian cycling (as opposed to racing, mountain biking, and touring (or especially for Tim Bouma and Mr One Wheel Cycle: uni cycling). You can find the entire report currently on the Urban Commuter Blog as we have trouble uploading it to our own site (5 MB, but that isn’t the problem).

We are happy to learn that the city appreciated it and will use quotes from the report (the positive ones, we suspect). Robert gave a great overview of things to come, from more bike lanes, bike corrals, cross rides, work on bridges, levels of service, possible future winter network (depending on the new city council), cross town bike corridor updates and tons more. All looks good although -as we state in our report- we wished work went a bit faster. Although the city has set aside 4 mln a year for cycling, one shouldn’t forget that many bike projects are wrapped into larger projects, where the value of the bike infrastructure is not separately mention but is certainly worth millions more.

Our message of ‘connect what we have’ has been received loud and clear and the city is taking this Citizens for Safe Cycling message very seriously.

I Bike, I vote – Alex deVries

Like in 2010, we are once again developing our message for the municipal elections on October 27. This message will be relayed to councillors but also to you, as a cyclist, to ask questions at debates and when your councillor knocks at your door. Alex gave a brief update on the road map to the elections and why we should ask these questions. When we set down earlier this year, we ticked of quite a number of actions that had been taken in those last four years based on our suggestions.

There was a a question from the campaign manager of Alden (@modalkid), who wants to run for mayor. Although we usually don’t meet with campaign managers, we meet an exemption for Alden, as he just reached 6 years of age.

There is a lot happening in Ottawa. The cycling agenda moves forward and although it can never go fast enough, every year we see some great improvements. Five days after Spring.Bike.Ottawa the NCC announced they want to put the ‘Park’ back in parkways with priority for cycling and walking. That same week, the city organised an open house for the Hospital link. While many people are concerned about the new road, the bike infrastructure looks pretty good. If you missed this year’s event, make sure you put it in your agenda for next year. Rule of thumb is the first Saturday in Spring.