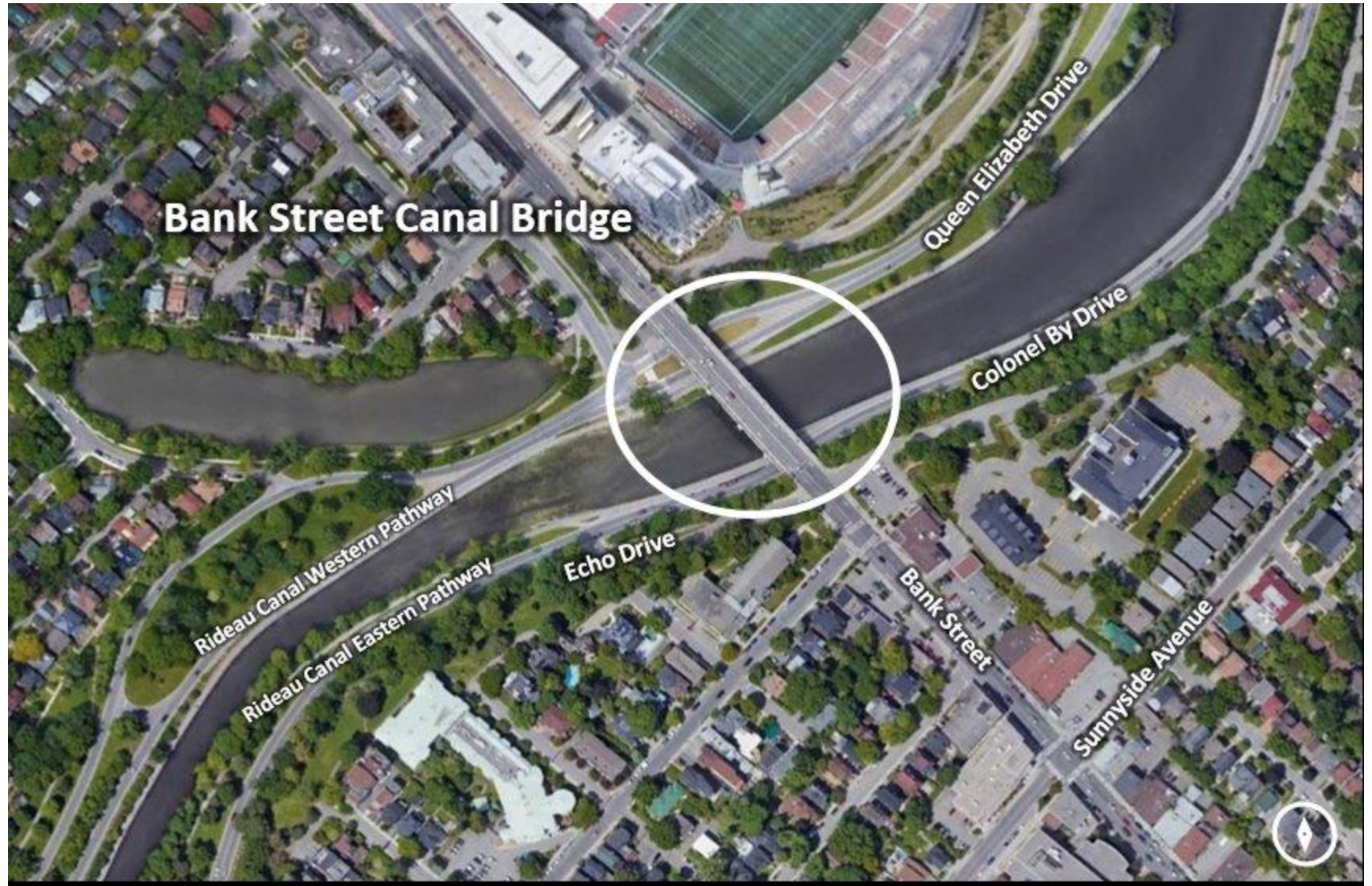 In April 2020, after the start of the pandemic, the office of Councillor Shawn Menard purchased a number of large barrel pylons to be placed on the Bank Street Bridge near Lansdowne in order to provide more space for active transportation and physical distancing. This created a safer environment for people walking and rolling, with limited impacts on motor vehicle traffic. It also gave people on bikes the opportunity to actually experience how travel over the Bridge could be much safer.
Around the same time, the City of Ottawa retained the consulting firm WSP to complete the design of repairs to the Bank Street Bridge. Construction of these repairs began in summer 2020, but after the start of the project, the City asked WSP to develop a revised design to improve active transportation facilities. The key change to the new design is that it will include two northbound vehicle lanes and one southbound vehicle lane over the Bridge which will create space for active transportation facilities.
In March 2021, Bike Ottawa attended a meeting organized by the City and provided comments on the new design. In a follow up letter to the City, several key points were made by Bike Ottawa.

Grade Separation
The proposed solution includes a difference in height between the cycle track side and pedestrian walkway side which we see as having pros and cons. It is better to have height separation to encourage the separation of users, but this also places a cyclist at increased risk if an evasive maneuver is needed, for example to avoid a small child or dog jumping into the cycle track. Nevertheless, Bike Ottawa endorses grade separation on the multiuse path (between users) because of the benefits it provides to other users.

Protection from Vehicles
There is a risk that a cyclist could fall from the raised cycle track into traffic. This risk could be mitigated with the installation a solid barrier of some kind. During the meeting, we shared images of narrow barriers that rely on tension wires. This would allow some snow to move to the street and would keep the people on bikes from falling into traffic. After further discussion as a group, we feel extremely uncomfortable with not having a physical barrier as part of the design options.
Bike Ottawa has indicated that the City and its planners must find a way to install a barrier within the space designated as a painted buffer (30 cm in each side), in order to prevent a tragedy from occurring along this cycle track.

Signage to Help Northbound People on Bikes
Bike Ottawa has also suggested the installation of signage at the bottom of the Bridge at the end of the northbound section to direct people on bikes and walkers to watch for each other, and encourage people on bikes to do a loop southbound on to the MUP just east of the Bridge, and then turn under if they wish to travel west.

Approaching the Bridge
We provided our support for extending the cycle track to Aylmer to reduce conflicts southbound when exiting the Bridge and start at Aylmer to go approach the Bridge going northbound.
We also feel that the southbound transition for people on bikes onto the Bridge is not ideal. Placing an advanced bicycle light at Exhibition Way (for people traveling from Lansdowne) would be really important for the people on bikes that are in the area right now, since we see few headed South from Holmwood Ave. down Bank.
We indicated our preference to have the bike lane begin further back. There is a speed board on the bridge that shows that motorists regularly drive faster than the speed limit, and with the new configuration, it may encourage them to try to “get ahead” of the line where two lanes move down to one. As a result, having the bike lane begin sooner will allow people on bikes a safer ride, giving them their own space from motor vehicles traveling at speed.
We also indicated the need for a physical barrier at Wilton Street to protect people on bikes in the bike lane by ensuring that vehicles slow down and make a proper 90 degree turn, rather than using the bike lane as a right turn lane.

Construction Start and End Dates
The City indicated that construction for the improved active transportation facilities is expected to begin in the Summer of 2021 and last until Fall 2021.

For More Information
For more information visit the City of Ottawa’s project page.