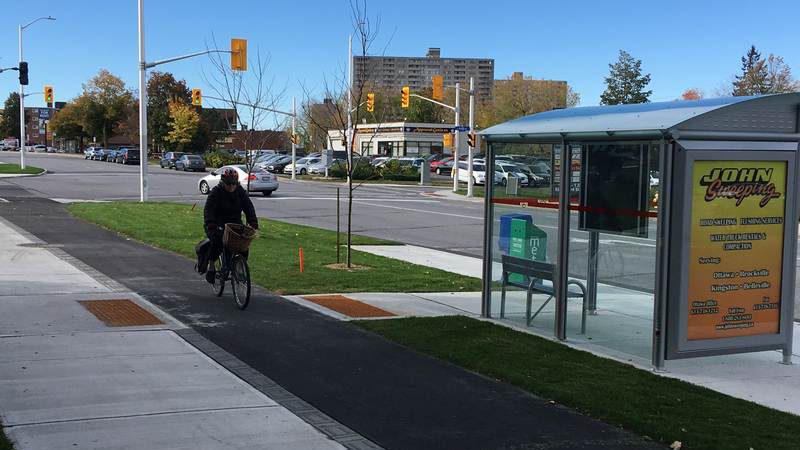 The budget is a great place to find out what’s in the pipeline, since the planning studies and design stages are funded long before shovels go in the ground. We keep a close eye on those early stages so that we can influence outcomes.

Attention to planning is also important so that the city is ready to go when other levels of government announce funding for “shovel-ready” projects, which always have short timelines peppered with plenty of photo-ops. But plans can be shelved, so it’s the construction phase where things get real. Read on to see what you can expect to see built in 2018 and beyond…

This is what you could think of as the baseline funding for bicycling in Ottawa, holding steady at about $4M a year. It’s used to build various projects in the 2013 Ottawa Cycling Plan (OCP) to ensure that we are on track to complete the 3-phase $70M plan by the year 2031. In 2018, we are near the end of phase 1. With such a long timeline, you might expect that this is an ambitious plan, but keep in mind that a few kilometers of road widening costs about the same as this entire plan.

Bike Ottawa is patient, but we think a child who is taking off the training wheels today should be able to ride on quality bicycle infrastructure before they graduate from high school. It will be our ongoing campaign to accelerate implementation of the OCP. Fortunately, Ontario is helping out with their new “Ontario Municipal Commuter Cycling Program” (OMCCP), so that will stretch this funding, and allow some phase 2 projects to be built a little sooner.

The list below includes many projects that are already well underway, but funding is often spread over multiple budget years. It’s also not clear from the list in the city budget whether the funding is to support design or construction phases. Also, keep in mind that, while this may look like a long list, according to the 2013 OCP, many of the projects are expected to be just sharrows: do not expect any change in how the road actually functions over what is already in place today, unless the plans themselves change.

These were a special “term of council” priority: some funds for new projects not already included in the OCP. In this year’s budget, we see $2.875 million for completing five community connections projects. 2018 will be the last year we’ll be seeing this, unless the next council wishes to continue setting aside some funding for active transportation beyond the scope of the OCP.

Given that budget 2018 also provides $180,000 for missing links studies and design, with similar amounts forecast out to 2021, we are optimistic the missing links will continue to be filled in.

Lighting along the multi-use pathway between uOttawa and Hurdman Stations (Wards 12 and 17) for a cost of $1.5 million

Harmer Avenue footbridge over the 417 will be rebuilt for $11.73 million.

Reconstruction of deteriorated multi-use paths (MUPs). You can expect smooth new asphalt at:

So that’s everything that’s new for 2018. No surprises, for good or for ill. The plans continue to be rolled out, and we are steadily seeing new bicycle infrastructure built. In total, we’re estimating about $25 million being spent by the city on cycling facilities, shared-use facilities, and initiatives that improve the cycling experience in Ottawa. A bit less than what we saw in 2017, but still quite a lot more than in every other year prior to that. Even though there’s a lot of catching up to be done, this is a respectable level of investment, and we’ll soon be able to look back and see how much has changed.

Looking beyond the city budget: Cycling is not only a municipal matter

Whether the topic is environment, public health, tourism, traffic safety, traffic laws, engineering standards, taxation and duty on bicycles, or vehicle standards and incentives for low-emissions vehicles, there’s a strong case to be made that other levels of government should support cycling. And that message is being heard.

Unlike last year, this budget didn’t explicitly include any contributions from the federal or provincial governments. However, in June of 2017, the province officially announced that it was putting a long-awaited $5 million towards the Fifth-Clegg Bridge. Then, on December 4, 2017, Ontario announced that Ottawa will be receiving $9,692,974 in OMCCP funding. Despite the precise-sounding number (perhaps just based on population), no further details were provided. We assume that figure includes the previously-announced Fifth-Clegg funding. Ontario is getting into the game, and giving municipalities across the province the incentives they need to become more bike-friendly.

At the federal level, in Ottawa-Gatineau we derive a lot of benefit from the NCC: paths (and their maintenance), drinking fountains, “Confederation Boulevard” (which includes the MacKenzie cycletrack), footbridges, and cycling facilities on interprovincial bridges. It’s hard to know what the NCC’s budget is, but it’s even harder to imagine what Ottawa would be like without their contribution. We should be very grateful. But we want to see federal leadership on cycling for all of Canada, not just the capital. Last year, the federal government came through in a big way with the public transit infrastructure fund (PTIF); Ottawa was able to put some of that money towards cycling projects. We expect future rounds of funding for transit, and are advocating for the federal government to adopt a national cycling strategy. Will the federal government support active transportation Canada-wide? You can count on us to keep you posted.