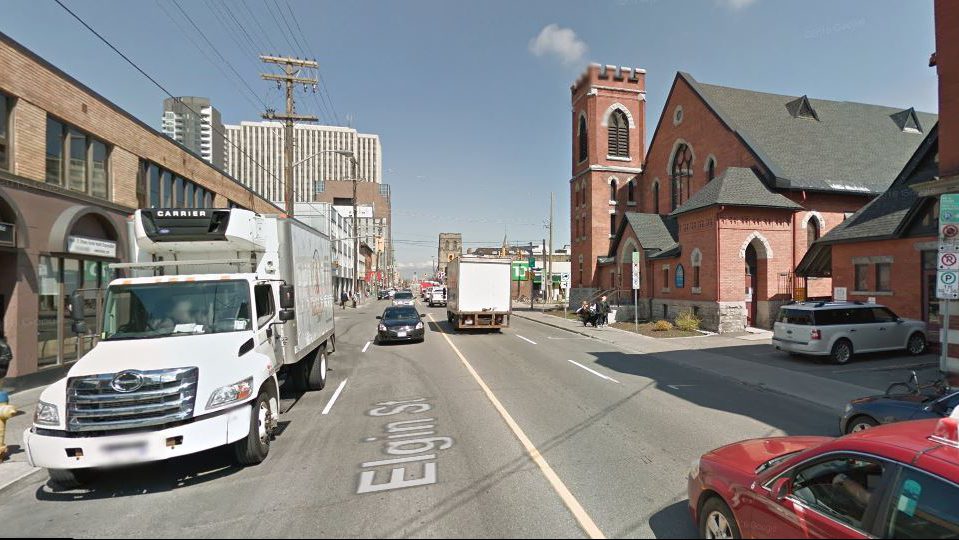 Sometimes, opportunity presents itself. For the first time in over 100 years, there was an opportunity to completely re-imagine Elgin street.

Update: Our letter to Transportation Committee.

The practical reason is to repair sewers, but the possibilities for place-making were just as real, if we had been brave enough to seize them. Elgin could have been a place to gather, a neighbourhood, a promenade connecting to the canal, War Memorial, Parlimentary district, and even City Hall. A people place. We won’t have this chance again for another hundred years. Whatever you can imagine the world will be like then, it’s doubful surface street parking in the heart of the capital will be a prominent part of the picture. But, turning away from a future of possibility, Elgin will most likely be re-built in an image of the past.

With all the pavement, it’s hard to tell, but this photo is made in May. Note the overhead wires, that the street parking is under capacity, that a truck is blocking the fire hydrant, and that there isn’t any bike parking to be seen, so there’s a bike locked to one of the many information signposts cluttering the street. On the rebuilt-Elgin, the truck would be parked on pavers, and maybe some of the no-parking signs won’t be needed, since parking will always be allowed where space is present.

In 2019, the city will rebuild Elgin Street and the western portion of Hawthorne Avenue between Main Street and Colonel By Drive, at a cost of $42 million. Residents know that this is a big deal; over 170 people attended a design consultation last summer. Many more sent in their feedback online. According to the report from that consultation, the top four requests were 1) wider sidewalks 2) bury utilities 3) remove sidewalk obstructions while adding street trees, and 4) implement cycling improvements. Concerns from business owners were 1) construction disruption 2) some preferred to retain four lanes for moving traffic during peak periods 3) some preferred to retain street parking on Elgin during off-peak periods.

Here’s Witte de Withstraat in Rotterdam, or, what Elgin could have looked like if the top 4 ideas from the public consultation were enthusiatically implemented (with thanks to a Hans on the Bike blog post for pointing out how similar these situations really are. Maybe not the fastest street for driving on, but it’s safe for cycling, you can even park on the street, and you can certainly relax and enjoy yourself once you’ve arrived.

The Elgin-Hawthrone project will include improvements such as slightly widened sidewalks, small street trees, and a 30 km/h speed limit, which if approved and appropriately designed, will be an important victory for making Elgin Street safer for all users. It won’t include buried hydro wires (a cost-saving city policy), and the trees won’t be as large or as numerous as they could have been if less of the space had been given over to cars. The rebuild will include “flex space”: a strip of pavers and a mountable curb, which in theory could be used as sidewalk space allowing larger patios or special events, but will be used as parking otherwise. Look for flex space on Queen street now, as well. Flex space won’t save anyone from being doored.

Unfortunately, despite the strong support for improved cycling facilities that was expressed through public open houses and online feedback, the preferred functional design being presented to Transportation Commitee does not provide bike lanes, or even make substantial improvements to the pedestrian space, in order to maintain street parking and turning lanes. The plan for a traffic-calmed Elgin is now about the best we can hope for, so Bike Ottawa will write a letter of support to Transportation Committee asking that Elgin be the best traffic-calmed version of Elgin that it can be. That means the we’ll be looking for the approved design to include those narrower lanes widths, raised crosswalks, and many other features that will help cue drivers to slow down. It would be a shame if even this design was watered down further to make the street more attractive for driving through at speed. We’ll be following the discussion at Transportation Committee on May 3.

Putting cycling infrastructure on Elgin has been a point of contention for cycling advocates, given that Elgin Street and Hawthorne Avenue could provide a direct cycling link between the newly-built Main Street cycle tracks and Laurier Avenue West bike lanes, as well as bike lanes planned on Elgin Street north of Laurier, connecting to Wellington Street and the soon-to-be-opened McKenzie Avenue bike lanes. If you already ride a bike, you’ll probably keep riding. But if, like most people, you’ve been waiting for protected infrastructure before you set out on two wheels, Elgin won’t be for you. Sorry.

In Ottawa, it continues to be a challenge to have cycling infrastructure included along main streets. Lanes on Elgin didn’t happen, apparently, because Elgin isn’t designated as part of the cycling network. This is particularly concerning coming so soon after the city was forced to admit that the omission of bike lanes from the newly-constructed Booth Street Bridge was a mistake, and that new infrastructure projects should include them. Also worth noting is our “Multi-Modal Level of Service” (MMLOS) policy, that demands that appropriate considerations be given to all modes of travel when a street is rebuilt. It’s disheartening when residents take the time to participate in the functional design process, only to have constructive feedback and solutions to improve mobility largely disregarded in favour of maintaining the status quo. In the meantime, it is clear that, even when it comes to planning our streets for the future, we are still living in the past.

Special thanks to Advocacy Working Group member Érinn Cunningham for representing Bike Ottawa at many design meetings and consultations both daytime and evening, for keeping us all posted, and for co-authoring this blog post.