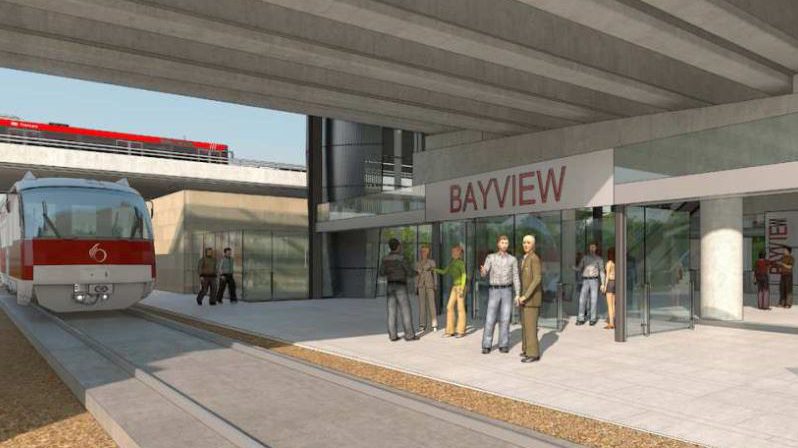 In this guest post, CfSC member, engaged citizen, and frequent AWG attendee Eric Darwin provides some insight into how an LRT station planning process with public input has evolved into a contractual arrangement without public input.

The result has been some, er… surprises…  in how well the designs seem to be respecting Ottawa’s stated goal of prioritizing walking and cycling. Recently released designs for Pimisi station have neglected to include safe and connected active transportation routes, and there are now concerns that Bayview station will interrupt the very popular Trillium (aka O-train) MUP. How did it come to this? And is enough being done to fix it? See what Eric has to say…

In the beginning, there was consultation

When the city staff was planning for the east-west LRT line, they hired consultants from industry and other transit systems to identify where stations were to go, how big they should be, and to identify key ingredients to successful stations. As part of this, they set up public advisory committees (PAC). I was asked to be on the station design committee and the station access committees. We worked with the architects and engineers offering feedback on features that we liked and didn’t. In my opinion, the process successfully improved the station designs and access. For example, the original design for Bayview had no east entrance as staff and consultants undervalued walk-in traffic. We gave their cycling consultant a (much deserved) hard time for underachieving. For Lyon station, we made a big deal of centretown residents accessing the downtown stations, not just office commuters. During this process, the station designs and access pathways were refined and improved. For example, with CfSC’S pressure,  we got more cycle parking at the downtown stations.

Then, the winning bidder took things behind closed doors

The city then invited the major contractors to propose their designs for the stations and LRT system, based on the city’s wish list. The City either accepted the winning proponents designs as-was, or refined them. But they did so in a closed process of negotiations with the contractors, without a public advisory committee. Somerset Ward is the location of four of the stations (Bayview, Pimisi, Lyon, Parliament) (five, if you count Campus, which is not in the ward but is connected to it by the Corktown footbridge). Fortunately, both the previous and current councillors for Somerset Ward are interested in the details of the design, and demanded some staff briefings.

The City has not released the final designs for the stations, although it has signed off on final contracts for the construction of each of them. Changes at this late date are do-able, but limited in scope and incur additional costs. The PAC and CfSC had input on the Pimisi Station / Booth Street design two years ago, but the city choose not to rectify the dangerous cycling environment they are creating. Similarly, at Bayview station the most significant of these missed items involved the MUPs.

Reevely’s column in the Citizen had the main thrust correct: the Bayview Station interrupts cycle and pedestrian connectivity in a bad way. On some of the details the design remains murky. For example, the RTG render image (above) shows the new Trillium Line station platform which will be on the WEST side of the Trillium tracks. The picture is looking west and south.

The Trillum MUP (CfSC note: also known by many as the much-loved O-train MUP), however, is and will continue to be on the EAST side of the Trillium tracks. The last version of the Bayview plans I saw did not interfere with the Trillium MUP, which will run north to the Ottawa River and south to Carling in a straight alignment. The east-west connection from Scott Street to the Albert pathways was also unclear – was it to be MUPs or a cycle lane on the Albert Street overpass?

The Missing Link: The earlier versions of the Bayview Station design had the Albert Street MUP connect to the Trillium MUP, using the current pathway alignment to the current OTrain platforms. This is important for cycle commuters to access the downtown from the south and from the western pathways. The connections are also important for pedestrians and people with strollers or walkers, wheelchairs, cargo bikes or child trailers. However, in the final Bayview Station design, as signed off by the city last December for construction by RTG, that connection disappeared. The only way to connect from the Albert Street MUP to the Trillium MUP is by going through the fare-paid zone and using the elevators to get to the Trillium level. Or walking your bike or stroller down a lengthy flight of outdoor stairs. It is a huge oversight / mistake.

What comes next? It remains to be seen.

The City is aware of the “missing link”, and is supposed to come up with a fix. They have not asked for input from CfSC or their advisory committees or local residents. In my experience, knowledgeable amateurs can provide solutions that work that the city staff seem unable to come up with. In the worst case, I expect the city will simply declare what they build now to be “temporary” or an interim alignment pending further development in the area, such as the Trinity Development at Bayview Station or the Sens Arena near Pimisi Station. Temporary, in Ottawa, could easily be the rest of our lifetimes.

Note that the call for public participation in the Phase 2 LRT station design and access process follows the same pattern as Phase 1: public input to the city, which then uses its improved knowledge base to deal with the contractor. The public has no input to the final designs.

Thanks to Eric for some explanation of how it can be that such a transformative project is being designed and built with so little public consultation and input. We’re glad to have city councillors in these wards who know how important walking and cycling is, and we’re confident they will be strong advocates for making these stations hubs for active transportation, not barriers. CfSC is keeping tabs on these issues as closely as we possibly can within the confines of this highly privatized structure, and will keep you posted on opportunities for you to add your voice. You can read more by Eric on his blog “West Side Action“, including several more pieces on Ottawa’s LRT.