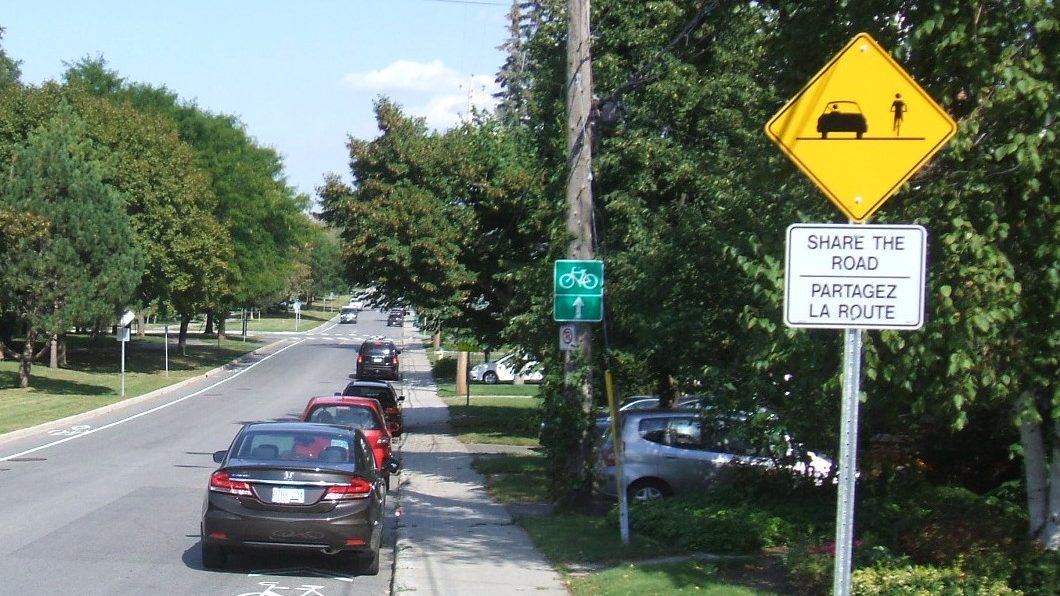 While some experienced and confident cyclists find sharrows help emphasize their right to use the road, sharrows do not generally improve the safety or comfort of the average person. They are not a suitable substitute for cycling infrastructure for people of all ages and abilities.

Citizens for Safe Cycling therefore supports the use of sharrows only as a temporary measure, or for alternative purposes such as bike-route wayfinding. This position statement on sharrows and a full explanation of our rationale is now posted in our list of policies.

Here are some examples of why we felt it was time to speak up about the use of sharrows in Ottawa.

Above: Sharrows and parking. On Byron, the first vehicle in line is parked illegally, but the rest are legally parked on top of sharrows along this designated bike route. Is this really what is meant by “share the road”? (Paul Clarke)

A: Worn sharrow on Beechwood. (Vanier Cycles)
B: Snow-covered sharrow on Laurier. (Brian Smith)
C: Sharrow eliminated by road patching on Beechwood. (Vanier Cycles)
D: Sharrow in a legal parking space on Byron. (Lana Stewart)
E: Sharrow confounding safe and/or legal cycling lane position on Meadowlands… ride over the sharrow, or use the unoccupied parking lane? Also notice the blacked-out sharrow in the dooring zone, re-painted but still in the dooring zone and too far right for a narrow travel lane. (Heather Shearer)
F: Sharrow placed in contravention of Book 18 (60 km/h speed limit) on Carling at the 417, as decelerating highway traffic merges along the curve. (Heather Shearer)

Arlington St. This sharrow is faded, patched-over, covered by debris, and too far right. Not much use to anyone. (Charles Akben-Marchand)

This sharrow on Somerset is nice and bright, sending a clear message that cyclists should ride in the door zone. (Charles Akben-Marchand)

These sharrows, placed to the right of two right-hand turn lanes, invite cyclists to place themselves in a position where they could be crushed by right-turning vehicles. (Charles Akben-Marchand)

You have to use a bridge to cross the Rideau River, and here’s your option on Bank Street. That faded sharrow doesn’t inspire a lot of confidence. (Google Streetview)

And finally, here’s an example where everything has been done “corrrectly”. This is a 40 km/h section of Bank street, on the bridge over the canal. It’s fairly low-traffic, with lots of unused road space to let drivers easily pass cyclists. Cyclists are encouraged to position themselves properly by taking the full lane. The super-sharrows (on a bright green background) are in good condition, and appear at frequent intervals. There are no parked cars to door passing cyclists. There’s a yellow sign to advise that cyclists can use the lane. This is probably the very best deployment of sharrows in the entire city: everything has been done according to recommended practices for sharrows. And yet, the result is still an environment where people ride on the sidewalk in fear for their lives. Would you ride here with children? (Google Streetview)

If even the very best we can do with painting sharrows is still a failure for the vast majority of the people who would like to ride a bike, let’s build better.