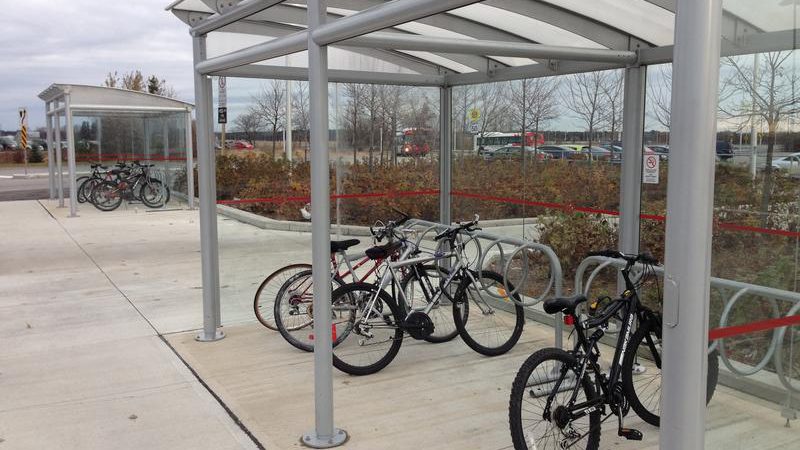 The Chapel Hill park and ride is proposed between Navan Road and Pagé Road, north of the future Brian Coburn Boulevard.

The Transportation Master Plan indicates the construction of the Cumberland Transitway is to occur sometime beyond 2031. The deferred timing has implications on the planned Chapel Hill Park and Ride which has a more immediate need.

The City is conducting an Environmental Assessment (EA) for the proposed work to identify and develop a preferred solution with the following key considerations:

Why is this important now?

While 99% of the project involves parking as many cars as possible, it is important that facilities such as these are also properly designed for people who bike and walk to a transit station. Unfortunately, cycling to public transit hubs doesn’t get the attention it deserves; facilities such as bike parking and bike accessibility are often an afterthought.

Getting proper cycling facilities in means you have to be involved in the process from day one.  Having modifications made afterwards is very difficult as that incurs extra cost.

If you live in the east end, you should go and become informed. If it is not for yourself, at least make your voice heard for the generations of commuter cyclists and pedestrians who will use it in the future.

The planning site is off Navan Road, west of Pagé and just south of Mud Creek. It is within the Ontario Hydro right of way and will be directly underneath the high-tension wires. The Hydro corridor can accommodate the Park and Ride and there is no need for a zoning change. There are some restrictions on the site caused by the presence of Hydro pylons. Hydro will need access to the pylons and wires.

Also, the bus platforms will be constructed just south of the corridor as Hydro does not want any structures within the corridor. There are three owners of the site, which the City has entered into negotiations with. Over 2016-2018, Brian Coburn Boulevard is to be extended westward from Mer Bleue to join Navan Road, just at the Park and Ride site.

Later, the Blackburn Hamlet Bypass will be extended southeastward to join Brian Coburn and Navan Road will be closed off farther north. Pagé Road is to be divided in two at the Park and Ride site, with a connection for emergency vehicles and perhaps local traffic as well. Initially, Brian Coburn will be two lanes (the east bound lanes will be built first), expanding to four later. The Park and Ride will initially accomodate about 250 cars, expanding later to upwards of 560-580 (likely past 2031).

This work is to be done concurrently with the LRT Phase 1. Buses from the Park and Ride will move riders quickly to the Blair Road transit station, the eastern terminus of the LRT. Right now, buses are not full and increasing ridership is the equivalent to adding another lane of road.

The planning appears to have taken into account cycling concerns. There will be a bike lane on the westward bound lane of Brian Coburn, with a MUP on the south side. There is a MUP planned between the north and south parts of Pagé. There is to be a crossride and crosswalk at Pagé and Brian Coburn.

Spaces for bike spaces are part of the functional design. The consultants referred to the Park and Ride at Innovation and Terry Fox as their model for bicycle parking.

Timing is functional design for January, March to Transportation Committee and Council and ESR Public Review in April.

So go and check out the latest.