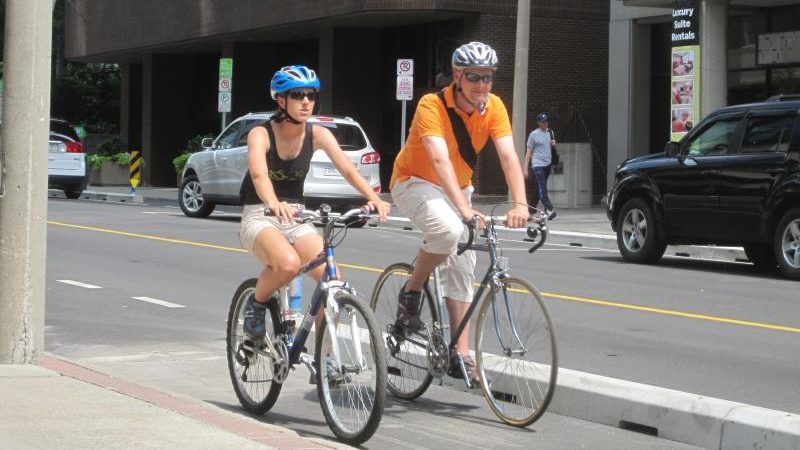 As you might remember, the funding for Ottawa’s cycling and pedestrian plans was not in the 2015 budget, where most of us, even members of council, would have expected to find it.

After all, infrastructure for walking and cycling is a pretty basic need (isn’t it?), particularly in a city like Ottawa, which has reached a certain “awkward stage”… not realistically able to fit any more cars into the core, and yet still struggling to outgrow its car-focused past.

However, we’re not yet at a place in this urban adolescence where, for example, providing a sidewalk on a highway overpass, connecting one route to another, providing wayfinding, or plowing everything we build is a routine matter, the way it would be if an engine was involved. Perhaps it is for that reason that walking and cycling were to be found in the “Strategic Initiatives”… a pot of funds separate from the city budget, where this term of council could take the lead in moving Ottawa in new directions. Or at in least directions that are new to us.

In this term of council, the themes for the strategic initiatives are to be a city that is affordable, caring, sustainable, and prosperous. The SI envelope was $32 million, plus $5.4 million for the city manager’s office, for a total of $37.4 million. That might sound like a lot, until you realize that that is just 1.2% of the total city budget of over $3 billion. And it will be closer to $20 million over the remainder of the term of council – 2015 is a special year.
For perspective on what you can buy for a few million dollars, the Hunt Club extension and interchange cost $58 million.

Meanwhile, this $37.4 million will be sprinkled around the city to support initiatives as diverse as, amongst other things: increasing forest cover, affordable housing, arts and culture, energy management, and celebrations for Ottawa 2017. The largest portions of this money, some $12.9 million in 2015 alone, will be spent on improving the pedestrian environment on Rideau and Queen Streets, in anticipation of more foot traffic after the LRT is completed. Certainly a worthwhile project, although CfSC wondered why this was not coming from the $2.1 billion the city is already spending on LRT. We were told by city staff that improving (as opposed to simply maintaining) the pedestrian environment wasn’t part of the original LRT project scope.

The draft term of council priorities came from the top down, something you can read more about here. Certainly, some councillors were not pleased about their lack of influence over the process. After each committee reviewed and voted on the priorities that fell under its area of responsibility, city council held a vote on the entire package. Does this need a spoiler alert? Council voted to pass the strategic initiatives, with very few changes, at its July 8 meeting.

In Part 2 of this series, we’ll share in greater detail how the strategic initiatives are going to be used to fund cycling infrastructure.

By Heather Shearer, CfSC Board member