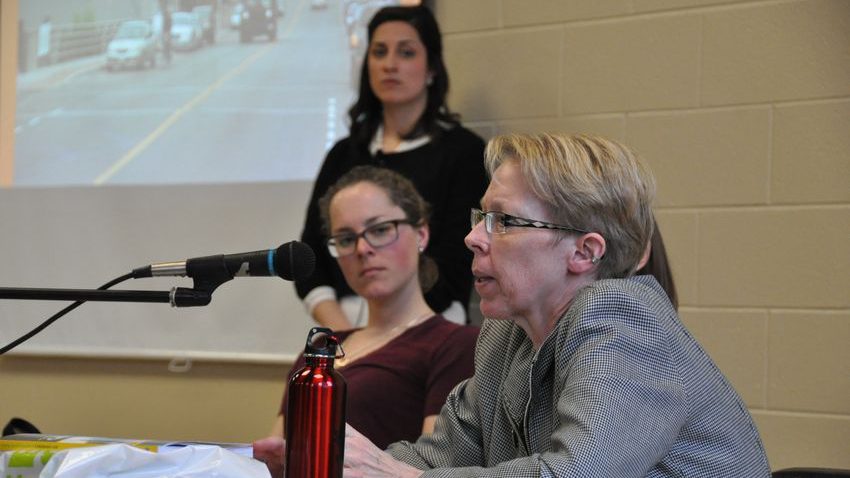 This year, Spring.Bike.Ottawa brought out just short of 90 community members on a damp, snowy first day of spring, including city Councillors Catherine McKenney, Jeff Leiper, and David Chernushenko; MPP Yasir Naqvi and MP Paul Dewar. Some of our counterparts from Cycle Toronto also made the trip to learn about CfSC’s work.

After initial mingling and words of welcome from Councillor Catherine McKenney, who mentioned that “we can’t afford not to invest in cycling, walking and transit“, moderator Isabel Jenish introduced a panel that highlighted some common themes on effective advocacy: know and show both the good and the bad of the existing cycling context, and be willing to communicate and cooperate with all road users when riding and when making a case for safer cycling.

CfSC board member Schuyler Playford introduced the 2015 Ottawa Report on Cycling. Based on surveys and consultations with hundreds of Ottawa cyclists, the annual report has become a reference for city councillors as well as city staff. What has made Ottawa a better place for cyclists this past year, and what can the city do better by 2016? Check out the report to find out.

Jamie Stuckless of Share the Road provided an update on #CycleON one year into Ontario’s cycling strategy. These include designating (a rather disappointing) $15 million for cycling in Ontario (including $10 million for municipal infrastructure) and holding consultations with cyclists on Bill C-31 amendment to highway traffic acts. The upcoming 2015 Ontario Bike Summit will be an opportunity for further engagement around #CycleON.

Nicole LaViolette, lawyer and co-author of Every Cyclist Guide to Canadian Law discussed the heavy regulation of cycling in Canada, with laws varying greatly across provinces and municipalities. She highlighted the importance of learning about these laws and their impacts in order to advocate effectively for safer cycling.

Over cookies from Branch Out Bakery and Bridgehead coffee, tea and hot chocolate, participants took a break to mingle and map their commute to the event thanks to a donation from World of Maps.

Wayfinding expert Glenn Gobuyan of PIXO Design introduced the importance of visual communication for cyclists based on his experience redesigning signage for NCC pathways. He highlighted the importance of presenting bike paths as routes to and through our neighborhoods, rather than as destinations in themselves. He imagines how creative signage might contribute to understanding all streets as safe cycling routes.

Trevor Haché shared some of the Healthy Transportation Coalition`s work, which brings together various social initiatives on anti-poverty, community housing, seniors, and cycling.

Representatives from other cycling-enthused community organizations also attended to discuss their initiatives:

Read another recap by The Incidental Cyclist.

We hope to see you out at our next big event– Tulips on Two Wheels on May 9th. Stay tuned for details!