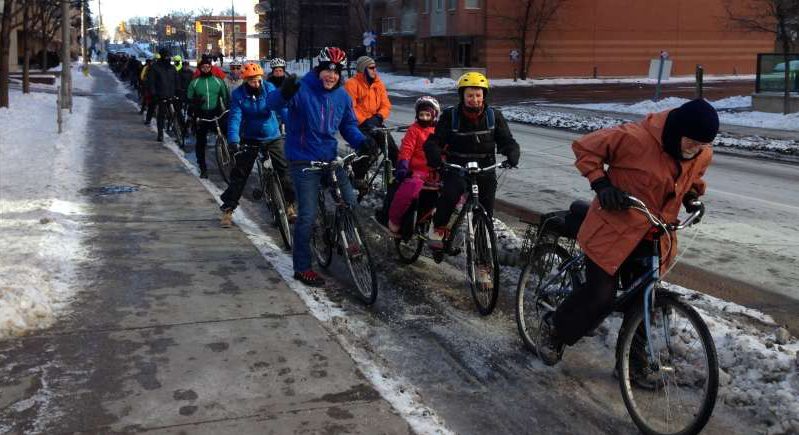 The 4th Annual Winter Cycling Parade in Ottawa was a great success. Around 50 people came out, on regular bikes, cargo bikes, on fat bikes and Xtracycles.

We cycled in -16C weather (and it didn’t feel that cold) with a much colder wind chill. The route went through downtown Ottawa. People had a great time, and the hot chocolate and the cookies from Yummy Cookies and sandwiches from Bread by Us were certainly appreciated after the ride.

There were several prizes for the coldest hands, the rustiest bike and the ‘lostest’ person. A big part of the Family Bike Parade is the social part and this year was no different. For the first time we had a panel with no less than four city councillors who shared insights on how they think the agenda for active transportation needs to move forward. Catherine McKenney, Mathieu Fleury, Tobi Nussbaum and Jeff Leiper (we learned today that his last name is derived from a very old English word “Leapere” which means ‘basketmaker’).

Each councillor introduced him/herself for a few minutes and then there was a session with questions. There were a lot of good and thoughtful questions which councillors answered very well. It was suggested that cycling should be paired with walking and public transport (multimodal).

A big thank you to the councillors to come to the event in their precious spare time, to the volunteers who helped made this a success, to Catherine McKenney for the hot chocolate (See tweet below), to the many Tweeters for sharing the pictures and Catherine Henry for organising the forum. We are already looking forward to next year’s ride.

And don’t forget the Winterbiketoworkday on Friday 13th, 2015. Sign up here.

Thank you very much for hosting and for the panel talk with some excellent background and suggestions. It feels like it’s going to be a great term of council! Anthony is already one of the primary beneficiaries of the winter cycling path maintenance that’s currently being done. He takes the western canal path (Southbound) to Preston, then the O-train path to Somerset. His office is at Bayswater and Wellington. Plowed bike path virtually the whole way. He has cycled just about every day this winter.

Important tip from @tobi_nussbaum and @JLeiper: email is the most effective way to reach a counc’lr; not always checking twitter. @cmckenney

Every year, another bakfiets. pic.twitter.com/kCymXITDqv