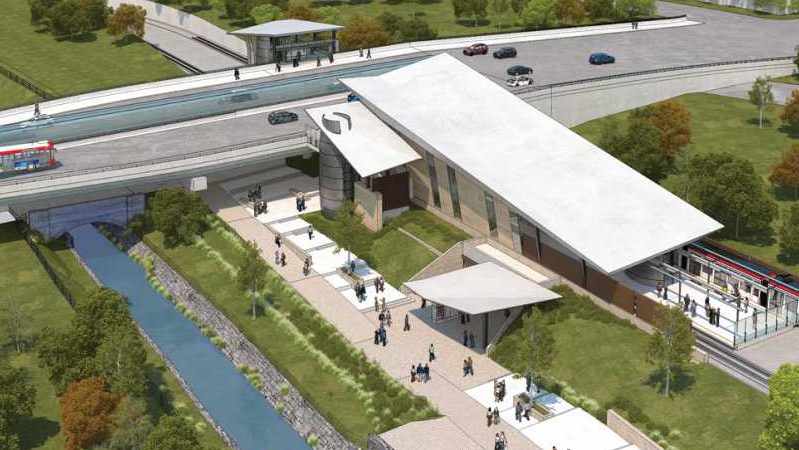 Citizens for Safe Cycling is concerned about the new Booth Street design near Pimisi station, the LRT station that will be built where Booth Street crosses the LRT, just south of the war museum on LeBreton Flats.

Update september 2016: When the bridge neared completion, there was an outcry from the general (cycling) public about the lack of cycling facilities on this important corridor to the Ottawa river pathways and Quebec. People referred to the recently agreed ‘Complete Streets’ policies. The city scrambled a team together, invited CfSC and the car lanes were narrowed a bit to allow a bike lanes. The bike lanes are not conform standards so they are officially ‘shoulders’. The city also allows cyclists to share the side walk officially.

The new Booth St will start at Albert Street as a bridge that continues all the way at an elevated level to cross the LRT tracks, and comes down after the LRT, to connect at ground level with the Sir John A. McDonald Parkway (SJAM). From there is goes on to Chaudière Island.

Pimisi station will be at ground level but it has a second storey that opens to the elevated Booth bridge above it. Booth in turn will have two lanes north bound (nb) and two lanes south bound (sb). OC Transpo will use Pimisi as a hub to transfer passengers between the buses and the LRT through Pimisi Station.

Albert St, that runs south of LeBreton, is thoroughly redesigned and includes raised separate bike tracks in the plans. At the north side of LeBreton, Chaudière Island will eventually be developed as a sustainable neighbourhood, with lots of attention for the environment, including priorities for cycling, walking and wheel chairs.
There will be no bike infrastructure on Booth. For two reasons: space and safety. That is unfortunate as both at the north end (Chaudière) and at the south end (Albert), excellent bike infrastructure will be built. We heard rumours that the Booth St designers had no idea of the Albert St designs.

Why no bike infrastructure?

The first argument is that there is no space and that the City has not enough right of way to build bike tracks. The four lanes and side walks take up all the available space.

We have had high level talks at the City, the NCC (just to be sure) and with Windmill Developments. The city suggests a parallel cycling route just west of Booth, but that will be through LeBreton Flats, which is federal NCC land. It is unclear when that path will be built. Obviously, that should include a passage underneath or over the LRT and that will be a fairly large project as the slope cannot be more than 5% (for wheel chairs). It appears there is no clear plan for this yet. There have to be crossings over the LRT anyway else the entire LeBreton Flats is pretty much isolated from Chaudière.

Although there are alternatives, those alternative routes are not very direct routes. And residents on bikes, like drivers, prefer to take the most direct route to their destination.

The second argument OC Transpo makes is that they wouldn’t know where to put bike tracks as they are nervous that passengers, who get off the bus, could get hit by residents on bicycles. That is a bit lame, as there are many situations in the world where solutions have been found. There are all kinds of ways to guide peds and cyclists into desired behaviour by putting some creative thoughts in your infrastructure design. That is not rocket sience.

Looking further into the future, there are suggestions that the Prince of Wales train bridge will be opened for both cycling, walking and even trains. Bayview station could then become an alternative hub for Pimisi. Those are all good developments but that will take a long time. Booth could then be downsized to two lanes only, creating space for bike tracks and more pedestrian space.

We are nervous about four issues.

The first one is that the buses pulling in and out of the bays or curbs at Pimisi need to cross the cyclists’ forward path; bus drivers will either hang impatiently behind the cyclists (scheduling pressures) or pass cyclists when they really probably shouldn’t. Cyclists in turn might pass buses just when the bus pulls away. This is an unpleasant situation for everyone. And what about possible bus line ups? The cyclist will be squeezed by a line of buses on the right and a line of cars on the left. You can take the lane, but that is not for everyone. Plus, it irritates drivers. Yes, they can wait but the reality is that they won’t. A sharrow ain’t gonna help.

Our second concern is that the bike path (or MUP) will not be built for a long time. The NCC has no detailed plans of designing the space west of Booth as far as we know. Plus where does it connect at each end?

Two lanes turning into one

Our third concern is that north of the SJAM Parkway, Booth turns into one lane each way. Why build two lanes each way in the first place on the first part of Booth then? In similar situations in town, drivers tend to pass on the right, speed up and try to merge back in the lane across the intersection.

Our fourth concern is a more overarching one. By now the City of Ottawa, a gold standard bike city no less, mounting the bike friendly destination even on the ‘Welcome to Ottawa’ signs at the edge of town, should have cycling integration as a default, not ‘when we have space’.

There are many reasons why the city should start with a design that favours active transportation (including urban skiing) and design everything else around it to accomodate the increasing number of residents who chose a bicycle and walk for recreation, commuting or running errands. Think obesity concerns, swaths of retirees who have lots of time for local recreation, youth postponing their car purchase and tourists who all benefit from a well designed network.

In 2014, in a ‘gold standard bike city’, Booth St should have an innovative complete streets active transportation design. The current design makes us think of a mouldy wood paneled basement or a 1971 Ford Pinto. Who wants that?