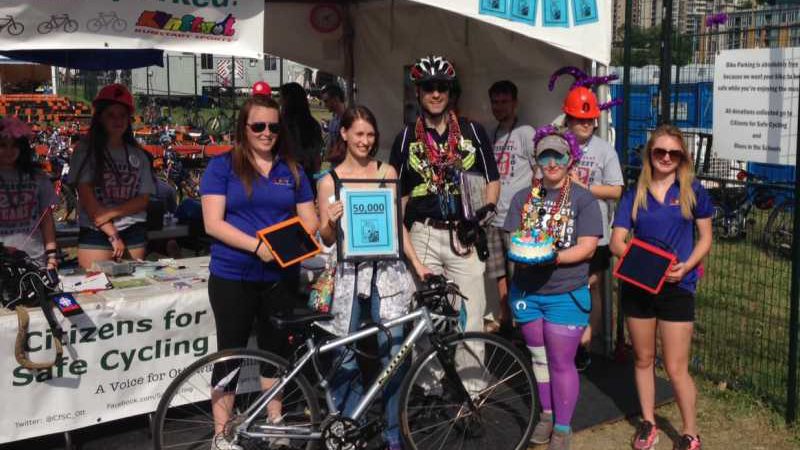 Today, Citizens for Safe Cycling and RBC Bluesfest volunteers parked their 50,000th bike since the valet service started in 2006 with a modest 1193 bikes parked. In 2013 the number had grown to 8632 bikes and not one was ever lost.

It was Allie Thompson who walked in to drop off her bike at around 5:15 pm on this hot Sunday afternoon, when Charles ‘sponteneously’ (“O my God, the 50,000th bike”) announced that she was the lucky winner of a $500 gift certificate from Kunstadt Sports.

RBC Bluesfest and Citizens for Safe Cycling are partners for many years in the well known supervised valet parking program in Ottawa. It has become very popular thanks to the great service provided by Charles and his volunteers, but also due to investments in bike infrastructure by the NCC and the City of Ottawa combined with an increased interest in getting to events by bike. It is not uncommon to see over 1000 bikes parked around the festival area. If you want to see a proof of “build it and they will come” it is here.

Other events, such as FolkFest, HOPE Volleyball and Bank Street’s Glow Fair provide supervised bike parking too (as does Lansdowne, as we learned today), following trendsetting past president of Citizens for Safe Cycling Charles’ initiative. Valet parking is free, but donations are appreciated. After deducting some cost, in 2013 $2500 went to Blues in the Schools (an educational program) and $2500 went to Citizens for Safe Cycling.

Congrats to Charles and his hundreds of volunteers for reaching this important milestone. The way it goes (and grows), we should hit the 100,000 mark in another 5 years or so. Trust us, Charles has a model built for these events, based on past numbers and weather forecasts (and perhaps even the Bluesfest line up…)