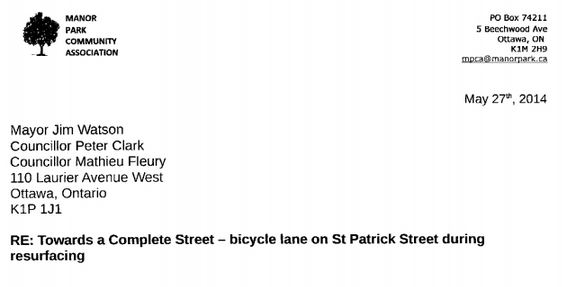 RE: Towards a Complete Street – bicycle lane on St Patrick Street during resurfacing

Concerns are growing in the east end of the city’s core. After Vanier and Lowertown, Manor Park Community Association too wrote a letter to express their concern about the lack of proper bike infrastructure on St Patrick. City staff maintains that they cannot narrow the lanes to 3 meters (the province mandates 3.25m), in order to create bike lanes for thousands of potential new cyclists who are now to nervous to bike on such a busy thoroughfare.

The rumour is that no city engineer can be found who wants to sign off on a design with bike lanes that are somewhat narrower than the required 1.50 meter. Does bureaucracy and liability fears trump safety for the residents?