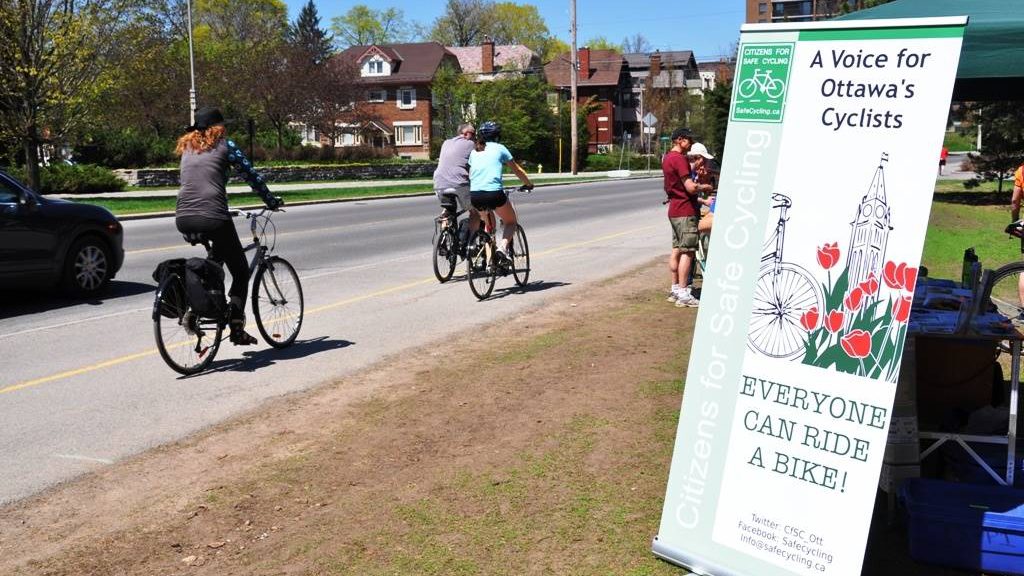 We are looking back on a fairly good year for cycling in Ottawa. There have been ups and downs, but generally speaking, Ottawa is moving in the right direction.

Some missing links are no longer missing and we believe the city is making a genuine attempt to improve cycling conditions, although it is difficult to believe in progress sometimes, considering the slow pace of implementation. Unfortunately, two cyclists lost their lives in Ottawa. In both cases, heavy trucks turning right were involved in the fatalities from what we understand.

There are many people in city hall who believe cycling should get more priority, but are held back by provincial design manuals. Others are not convinced yet, so it remains important to keep raising concerns. Citizens for Safe Cycling celebrates our 30th anniversary in 2014. That’s right, 30 years of bike advocacy in the Ottawa region! Hundreds of dedicated volunteers have spent tens of thousands of hours on bike advocacy. Of course, we have been very active in 2013 once again.

Let’s look back to the year that was and see what was on the agenda.

Family Winter Bike Ride was fun. About 40 people showed up on a sunny and not so terribly cold Sunday morning. We cycled through downtown and the Glebe. The press was there for the nice shots of snow and cyclists and cute kids in bike trailers.

Spring.Bike.Ottawa was sold out with 60-70 people attending. We listened to 10 speakers. That was a bit much, but when we invited 10 speakers, we never foresaw that all 10 speakers would actually confirm.

Tulips on Two Wheels could be found along the canal during the Jane’s Walk Weekend, in May. While board members and volunteers cheered on the thousands of cyclists, Alex deVries was a tour guide and two bike mechanics tuned the bikes of passing cyclists.

Our AGM traditionally has a key note speaker. This year we had Sarah Craig from IheartBikes, a bike rental company on the Halifax waterfront boardwalk. She talked about what motivated her to start her own bike business.

Lights on Bikes took place in early November. We handed out bike lights with support from Safer Roads Ottawa to remind cyclists that being seen is very important in the dark days before Christmas.

We participated at several community events, depending on the availability of volunteers. We participated in Capital VeloFest, Vanier Bike event and Peter Hume’s community event. We backed out of MEC’s bikefest because of the crappy weather. Our bike trailer was used by the EnviroCentre folks, who rode the trailer all over Ottawa during Bike to Work month to inform the public about the benefits of cycling.

We gave presentations in Calgary, AB and in Fredericton, NB. In Ottawa, we were also asked to present a so called PechaKucha: 20 slides with 20 seconds for every slide. That was fun. We also spoke at the Danielle Nacu memorial ride and at the introduction of David Chernushenko’s movie: “Bike city, great city.” And we spoke at the annual meeting of the Hampton-Iona community association.

2013 also saw the release of the second annual bike report, a very comprehensive document that covers many facets of cycling in Ottawa.

Our membership is up to 220 members now, up from the mid 140’s a few years ago. In fact, the last three years were some of the best in membership growth since we started in 1984.

An Award and a Nomination

We received an award from the Landscape Architects of Ontario and a provincial nomination for the Lights on Bike Event.

We rekindled our advocacy meetings, now with a different set up. We are often approached by people who would like to see a particular change. We invite them to come to the advocacy meetings to discuss a problem but also to work with others towards a solution. That can be the 311 reporting for bike issues or a particular bridge that is dangerous for cyclists. Together we approach either a councillor or a city staff or dig up information. The meetings have been well attended and we saw many new faces.

We try to approach volunteers now better based on what volunteers would like to do: some like research, others love being at our booths. We met with Windmill properties about the future of Chaudiere Island, with Public Works (federal), the NCC and others. We cooperated with the Old Ottawa East residents on pushing for a complete street. This was time consuming, but together with a whole group of advocacy groups (Ecology Ottawa being one of them) we were able to convince city council. It was one of those 5 hour marathon meetings.

Over the year, we presented three times at Transportation Committee and pushed for a winter cycling network for Ottawa, with guaranteed levels of services for cyclists. We also pushed – with help of Yasir Naqvi – for participation by Ottawa Cycling representatives in the Ontario Cycling Strategy. The meetings are in Toronto and we either participated in person or by conference call.

We were often in the press. Mostly to comment on bike parking, LRT, bridges and bike lanes. But we were also invited to write for Healthwise Magazine, a free local magazine with over 10,000 copies. We wrote two articles and received good feedback. We found this to be a great way to reach out outside the usual cycling crowd. We also wrote a co-ed for Unpublished Ottawa. Do read the comments. We were also on TV and radio a number of times.

Behind the scenes we did a lot more. We worked on improving our financial reporting and on better communication with our volunteers. We bump into people during meetings and put a bug in someone’s ear about a certain topic, we meet with city planners on a regular basis, we’ll talk to city councillors, go to the occasional barbeque and so on. All to make sure that cycling stays on everyone’s agenda. We have to keep working on better cycling conditions and we need your support.

We are looking forward to our 30th birthday celebration, to increased participation, to new bridges and paths and, above all, to  further normalisation of cycling as a means of transportation.